The Art of the Fart

The following is an unedited report from The Daily Mail UK, 21 August 2019, at:
https://www.dailymail.co.uk/sciencetech/article-7375521/Scientific-formula-finds-worlds-funniest-flatulence-long-loud-slightly-wet.html 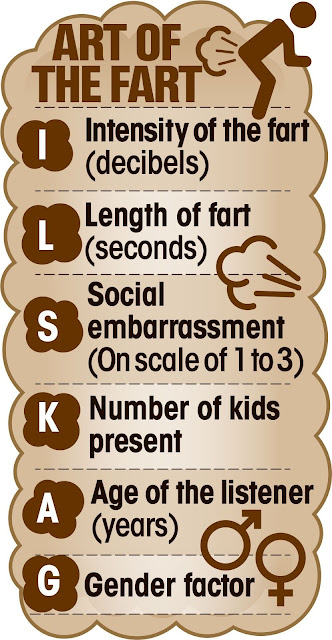 Scientific formula finds the world's funniest flatulence is 'long, loud and ever so slightly wet'

The 'world's funniest flatulence' has been revealed by scientists in a unique piece of research. The Flatulence Report, for The Beano, has worked out a mathematical formula to find what sort of breaking wind was the most comical. Academics tested for 176 different noises ranging from low to high pitch, short to long, dry to wet and from loud to squeaking. Components in the formula included intensity, length, social embarrassment, the number of children present and the age and gender of whoever hears it. 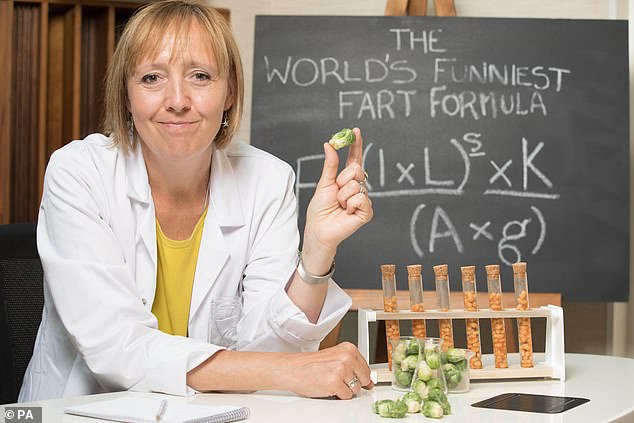 WHAT IS THE FART FORMULA?
Scientists inputted various factors to determine the comedic value of flatulence
I = Intensity of the fart (dB)
L = Length of fart (sec)
S = Social embarrassment (rated on a scale of 1 to 3)
k = Number of kids present
A = Age of the listener (years)
g = Gender factor: If female, multiply by 1.05

The funniest fart came out on top in a public vote with a mean score of 8.27 out of 10 - also being described as 'unfortunate' and 'potentially messy'.

Scientist Dr Helen Pilcher led the research with the help of 'Beano boffins' and sound specialists Bose Professional. She said: 'The funniest fart is long, loud and ever so slightly wet. This gives it the potential to cause major social embarrassment. 'The research and our formula show how funny farts are. It's as simple as that. Anyone who says they've never farted or found a fart funny has pants that are probably on fire.'

The study found farts are likely to be found 5 per cent funnier by men than women, with children also finding them 23 per cent funnier than adults. Young adults in the 18-24 age group were the least amused.

Mike Stirling, editorial director of Beano Studios, said: 'We hired some genuine boffins to prove it, by helping us release the funniest fart of all time - you know, for science.'

Components in the formula included intensity, length, social embarrassment, the number of children present and the age and gender of whoever hears it. Academics tested for 176 different noises ranging from low to high pitch, short to long, dry to wet and from loud to squeaking to find the funniest forms of breaking wind.

Want to hear the world's funniest fart, as well as getting the fill story of the above research?  Click on:

The Queen was showing the Archbishop of Canterbury around the royal stable, when one of the stallions close by farted so loudly it couldn't be ignored. "Oh dear," said the Queen, "How embarrassing. I'm frightfully sorry about that." "It's quite understandable," said the Archbishop, and after a moment, added, "as a matter of fact. I thought it was the horse."

There was a young lady called Carter,
A world champion musical farter.
To public applause
She'd pull down her drawers
And play Beethoven's "Moonlight Sonata"

And here’s something dedicated to Noel, a great farter father-in-law. . . .