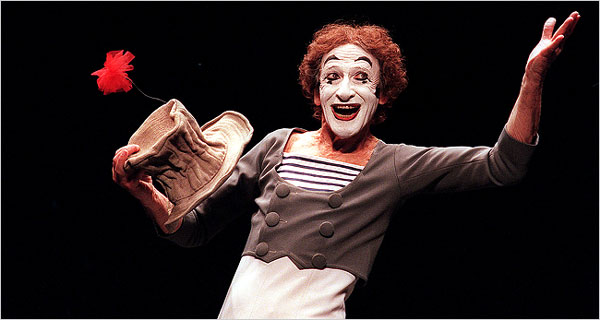 Byter John P sent me a clip about Marcel Marceau that provided a lot of information that I had not known previously.  Thanks John.

Marceau was born in Strasbourg, France, to a Jewish family and was named Marcel Mangel. His father was from Poland and his mother came from what is today the Ukraine.

At the age of 5 he was taken by his mother to see a Charlie Chaplin film.  He was entranced and determined to become a mime artist.  He entertained family and friends with his mime performances.
________________

After Germany invaded France, Mangel, then aged 16, fled and joined the French Resistance.  He and his brother Alain adopted the last name "Marceau" after a general of the French Revolution.
________________

Jewish residents fled Strasbourg but Marceau’s father was captured by the Gestapo, was sent to Auschwitz and died there.  Marceau’s mother survived.  Years later Marceau’s cousin, Georges Loinger, who had been a Commander in the Resistance with Marceau, commented “You see the pain and the sadness in his mime skits. The origin of that pain was his father’s deportation.”  Marceau didn’t speak of his war time experiences until he received an award in 2001 (more of that later), when he said “If I cry for my father, I have to cry for the millions of people who died. I have to bring hope to people,”
________________

Masquerading as a boy scout, Marceau evacuated a Jewish orphanage in eastern France. He told the hildren he was taking them on a vacation in the Alps and led them to safety in Switzerland. He made this dangerous journey three times, saving hundreds of Jewish orphans.  He was able to avoid detection by entertaining the children with silent pantomime.  Documentary filmmaker Phillipe Mora, whose father fought alongside Marceau in the French resistance, said, “Marceau started miming to keep children quiet as they were escaping. It had nothing to do with show business. He was miming for his life.”
________________

On one occasion Marceau and a companion ran into a unit of 30 German soldiers in a forest.  Marceau pretended to be an advance guard of a larger French force and convinced the Germans to surrender
________________

After the liberation of Paris, Marceau joined the French army. His excellent command of the English, French, and German languages enabled him to work as a liaison officer with General George Patton's army.
________________

Marceau gave his first major mime performance to 3000 American troops after the liberation of Paris in August 1944. Following the war, he studied dramatic art and mime in Paris.
________________

The character of Bip the Clown developed by him, in striped shirt, sailor pants and a battered top hat with single red flower sprouting from the lid, was modelled on Charlie Chaplin’s The Little Tramp.  The name is a reference to Pip in Great Expectations.  According to Marceau, Bip was a figure of hope.
________________

In 2001 Marceau was awarded the Raoul Wallenberg Medal for humanitarianism.  There were some ironies inherent in this award:  Could a mime make an acceptance speech?  Also, according to Professor Irene Button in her introduction,  “This year the person chosen to be the Wallenberg Medallist is unlike all previous medallists in that he is famous all over the world, yet he is not widely known for his humanitarianism and acts of courage, for which we honour him tonight.”

Marceau himself said: “I don’t like to speak about myself because what I did humbly during the war was only a small part of what happened to heroes who died through their deeds in times of danger.”
________________

Michael Jackson was friends with Marceau for nearly 20 years and planned a concert with him in 1995 but this had to be cancelled after Jackson was hospitalised for exhaustion during rehearsals. According to Jackson “He was a great guy. I used to go see Marcel Marceau all of the time, before Off the Wall. I used to sneak in and sit in the audience and watch how he would defy the laws of gravity, like he was stepping on air. I would take some of those things and include it into rhythm and dance when I move.”  Jackson borrowed his famous moonwalk from a Marceau sketch, Walking Against the Wind.
________________

Marceau made a notable film appearance in Mel Brooks’ 1976 film Silent Movie.  In that film producer Mel Funn (Mel Brooks) seeks to recruit big name actors to star in the first Hollywood silent film to be made in 40 years.  Everything is done with screen titles as Funn secures such stars as Anne Bancroft, Liza Minnelli, Burt Reynolds, James Caan and Paul Newman, all playing themselves.  There is one spoken word of dialogue in the film: Funn approaches Marcel Marceau who gives a firm “No”.

The actual scene reads/sounds as follows:

The silent man with the sad face would remain silent ever after. 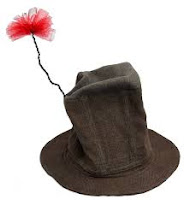