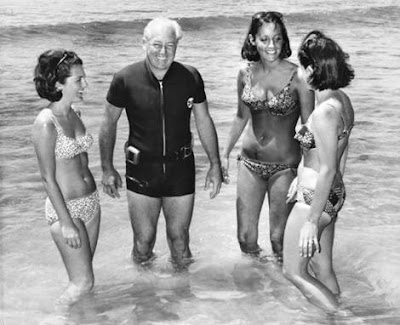 Harold Holt (1908-1967), pictured above with his stepdaughters-in-law in 1967, was  the local member for Malvern and Prime Minister of Australia from 1966.  A keen diver and spear fisherman, he disappeared in rough seas off Cheviot Beach, Victoria on 17 December 1967.  His body was never found.
At the time of Harold Holt's disappearance, Malvern Council had been constructing a swimming complex in the suburb of Glen Iris, the complex to be called the City of Malvern Olympic Centre.
In 1969 with the complex close to being finished, the Council decided to change the name.  Not seeing the irony of naming the swimming complex after a Prime Minister who had been lost at sea whilst swimming, presumed drowned, the Council named the new complex the Harold Holt Memorial Swimming Centre.  It remains so named to this day. 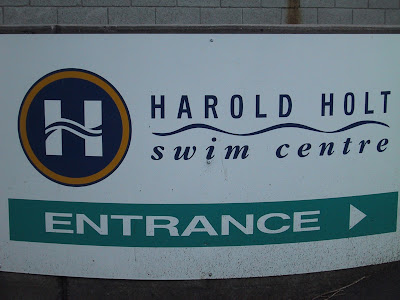