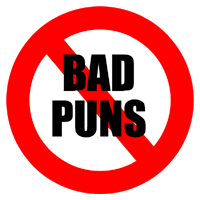 Pun:
1. the humorous use of a word or phrase so as to emphasize or suggest its different meanings or applications, or the use of words that are alike or nearly alike in sound but different in meaning; a play on words.
2. the word or phrase used in this way.
"A pun is a short quip followed by a long groan."
~Author Unknown
1. Two vultures board an airplane, each, carrying two dead raccoons. The stewardess looks at them and says, "I'm sorry, gentlemen, only one carrion allowed per passenger."
2. Did you hear that NASA recently put a bunch of Holsteins into low earth orbit? They called it the herd shot 'round the world
3. Two boll weevils grew up in South Carolina. One went to Hollywood and became a famous actor. The other stayed behind in the cotton fields and never amounted to much. The second one, naturally, became known as the lesser of two weevils
4. Two Eskimos sitting in a kayak were chilly, but when they lit a fire in the craft, it sank proving once again that you can't have your kayak and heat it, too.
5. A three legged dog walks into a saloon in the Old West. He slides up to the bar and announces: I'm looking for the man who shot my paw."
6. Did you hear about the Buddhist who refused Novocain during a root canal? He wanted to transcend dental medication.
7. A group of chess enthusiasts checked into a hotel and were standing in the lobby discussing their recent tournament victories. After about an hour, the manager came out of the office and asked them to disperse. "But why?" they asked, as they moved off. "Because," he said, "I can't stand chess nuts boasting in an open foyer."
8. A woman has twins, and gives them up for adoption. One of them goes to a family in Egypt and is named "Ahmal." The other goes to a family in Spain; they name him "Juan." Years later Juan sends a picture of himself to his birth mother. Upon receiving the picture, she tells her husband that she wishes she also had a picture of Ahmal. Her husband responds, "They're twins! If you've seen Juan, you've seen Ahmal."
9. Mahatma Gandhi, as you know, walked barefoot most of the time, which produced an impressive set of calluses on his feet. He also ate very little, which made him rather frail and with his odd diet, he suffered from bad breath. This made him ....what? (Oh, man, this is so bad, it's good) A super-callused fragile mystic hexed by halitosis.
10. And finally... there was a man who sent ten different puns to friends, in the hope that at least one of the puns would make them laugh
Unfortunately, no pun in ten did.

Posted by BytesMaster at 9:16 PM