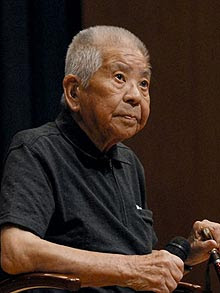 Tsutomu Yamaguchi died on 4 January 2010, aged 93.
Who?
Yes, he isn’t as well known as, for instance, as actors and celebrities who died in 2010:
Blake Edwards
Leslie Nielsen
Gary Coleman
Tony Curtis
Eddie Fisher
Patricia Neal
Dennis Hopper
Lena Horne
Peter Graves
Kathryn Grayson
Fess Parker
J D Salinger
Erich Segal
Jean Simmons
Pernell Roberts
Yamaguchi San, however, had a claim to uniqueness that few others had and, depending on your point of view, he was either one of the luckiest, or unluckiest, individuals from WW2.
Tsutomu Yamaguchi was nuked at both Hirsoshima and Nagasaki but survived.
Yamaguchi had been in Hiroshima on shipbuilding business for 3 months and was due to go home on 7 August 1945. Unfortunately for him, the Enola Gay dropped “Little Boy” on the city on 6 August, the first atomic bomb ever dropped on a populated target. It killed about 140,000 people.
At about 8.15 am he was walking to the shipyards. He had intended to say goodbye to his work colleagues and catch the train home, where his wife Hisako and his baby son Katsutoshi awaited.
In his words:

“It was a flat, open spot with potato fields on either side. It was very clear, a really fine day, nothing unusual about it at all. I was in good spirits. As I was walking along I heard the sound of a plane, just one. I looked up into the sky and saw the B-29, and it dropped two parachutes. I was looking up at them, and suddenly it was like a flash of magnesium, a great flash in the sky, and I was blown over."

He passed out, then recovered consciousness.

“When the noise and the blast had subsided I saw a huge mushroom-shaped pillar of fire rising up high into the sky. It was like a tornado, although it didn't move, but it rose and spread out horizontally at the top. There was prismatic light, which was changing in a complicated rhythm, like the patterns of a kaleidoscope. The first thing I did was to check that I still had my legs and whether I could move them. I thought, 'If I stay here, I'll die'."

Yamaguchi was only 3 kilometres from Ground Zero.
The blast temporarily blinded him, destroyed his left eardrum and badly burnt his upper body and half of his face.
He managed to make his way to an air raid shelter and then to his shipyard, where he found colleagues also alive. He and two such colleagues, Akira Iwanaga and Kuniyoshi Sato, elected to return together to their homes… in Nagasaki.
Two days after Hiroshima was destroyed, Yamaguchi reported for work in Nagasaki. Yamaguchi obviously had a strong work ethic and may not have heard of taking a sickie.
According to Yamaguchi, just after 11.00am, he was telling his employer what had happened in Hiroshima and what the blast had been like. His employer was incredulous and refused to believe that Hiroshima had been destroyed by just one bomb. Then there was a repetition of the enormous flash he had experienced earlier and "the whole office, everything in it, was blown over".
A second B-29, Bockscar, had dropped an even bigger atom bomb, dubbed "Fat Man". It killed 70,000 people.
Yamaguchi, who was again only 3 kilometres from the centre of the blast, was saved by being sheilded by a reinforced stairwell. His bandages were blown off but he was able to make his way home where he found his wife and son safe. He was ill in a shelter at his home for weeks, unable to attend the hospital in that it no longer existed.
Like Yamaguchi, Iwanaga and Sato also managed to survive both the Hiroshima and Nagasaki blasts. It is believed that up to 100 individuals are double survivors, however only Yamaguchi has been officially so recognised, in March 2009. It is also believed that no other double survivors were as close to the blasts as Yamaguchi.
In Japan, persons who survived the bombings and the radiation are known as hibakusha.
Hibakusha and their children were (and still are) victims of severe discrimination due to lack of knowledge about the consequences of radiation sickness, which people believed to be hereditary or even contagious.
Studs Terkel’s's book The Good War includes a conversation with two hibakusha. The postscript observes:

There is considerable discrimination in Japan against the hibakusha. It is frequently extended toward their children as well: socially as well as economically. "Not only hibakusha, but their children, are refused employment," says Mr. Kito. "There are many among them who do not want it known that they are hibakusha."
—Studs Terkel (1984), The Good War.

Following the war, Yamaguchi downplayed his role as a double survivor, it being a cause of shame, rather than honour. He had been granted hibakusha status by the government and this allowed him certain benefits and health care. He was content to take it no further.
His attitude changed in his 80’s, beginning with the writing of a book, The Human Raft, The title comes from his experiences after the first blast, when he was making his way to the shipyard. The bridges over the rivers were down, but one river was full of carbonised naked bodies of men, women, children, floating face-down “like blocks of wood”. Yamaguchi used these bodies — part treading, part paddling — to get to the other side. His human raft.
The book is a collection of hundreds of 31 syllable poems, known as tanka, all dealing with his experiences and feelings:

Carbonised bodies face-down in the nuclear wasteland
all the Buddhas died,
and never heard what killed them.

With the death of his son in 2002 at the age of 59, he became a campaigner against nuclear weapons. "Having been granted this miracle, it is my responsibility to pass on the truth to the people of the world."
At his insistence, he was recognised by the government as nijyuu hibakusha, or twice-victim of the atom bomb.
Yamaguchi died of stomach cancer, his son also died of cancer and his wife died of kidney and liver cancer in 2008 aged 88. All, had been plagued by serious health problems since exposure to the blasts..
During the later years of his life he had taken inspiration from an image of his life as a baton, passed on every time anyone heard or read his testimony. All these batons might form, together, another human raft.

Posted by BytesMaster at 2:59 AM