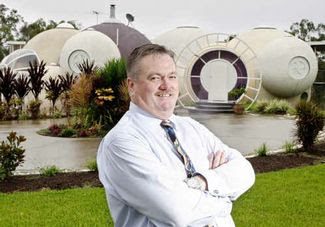 There is some dispute whether Sir Edmund Hillary was the first to climb Everest or whether it was George Mallory, who disappeared on Everest in n1924 and whose remains were found a fe hundred metres from the summit in 1999.  Was he going up or coming down.  But that is a Bytes for another day.  The point of mentioning George Mallory is that when asked why he wanted to climb Everest, he reportedly answered “Because it’s there.”
Years later, in 1983 in another part of the world, Ipswich architect Graham Birchall was working on a thesis for an architecture degree.  His thesis was the design of a house, which he also subsequently commenced constructing. I say “commenced” because even today the house, made of 11 domes and 16 rooms, is not finished.  Birchall says that it never will be.  Asked why he designed a house that looks like a mass of bubbles, he has replied “To see if I could.”
The house has several spa bath ensuites, a fireplace which emits multi-coloured smoke, two kitchens, an in-house waterfall that acts as an air-conditioning unit, a multi-level cinema and a driving range on the back porch that overlooks the Bremer River.  The lights, security cameras, even the front gate, can be operated through Birchall’s mobile phone.
And like the Energizer bunny, Birchall just keeps on going.  “I just think of unique ideas for the house when I’m going to sleep and then I set out to try and make them work. It can take a while but it’s always do-able.” 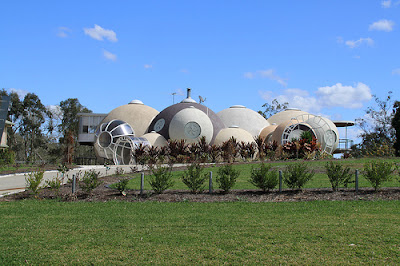 Posted by BytesMaster at 9:19 PM