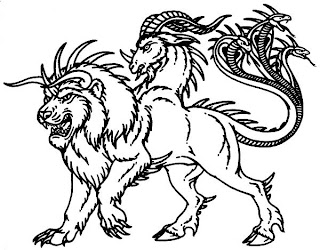 In Greek mythology, a chimera was a monster that had the head and body of a lion, a tail that was a snake ending in a snake’s head.  There was a goat’s head protruding from the middle of the back.  Today the word “chimera” refers to any animal that has two or more different sets of genetically distinct cells working together.
I came across the article below in the UK’s Daily Mail Online (Yes, I know that British journalism is not held in the highest esteem at the moment) and it felt a bit freaky: animal-human hybrids.  I have set it out in its entirety.
When I looked into it a bit deeper I found that human-animal hybrids, also referred to as chimeras and parahumans, have been the subject of research for years.  It has mostly consisted of the mixing of genes or cells from different species, e.g. adding human (and other animal) genes to bacteria and farm animals to mass-produce insulin and spider silk proteins, and introducing human cells into mouse embryos. In 2003 Chinese scientists at the Shanghai Second Medical University successfully fused human cells with rabbit eggs.  Whilst such genetic engineering has not reached the stage of creatures walking around partly human and partly animal, nonetheless there have been debates as to the eithical, moral and legal issues.
This is the Mail Online article:
150 human animal hybrids grown in UK labs: Embryos have been produced secretively for the past three years
Daniel Martin and Simon Caldwell, 23rd July 2011
Scientists have created more than 150 human-animal hybrid embryos in British laboratories.
The hybrids have been produced secretively over the past three years by researchers looking into possible cures for a wide range of diseases.
The revelation comes just a day after a committee of scientists warned of a nightmare ‘Planet of the Apes’ scenario in which work on human-animal creations goes too far.
Last night a campaigner against the excesses of medical research said he was disgusted that scientists were ‘dabbling in the grotesque’.
Figures seen by the Daily Mail show that 155 ‘admixed’ embryos, containing both human and animal genetic material, have been created since the introduction of the 2008 Human Fertilisation Embryology Act.
This legalised the creation of a variety of hybrids, including an animal egg fertilised by a human sperm; ‘cybrids’, in which a human nucleus is implanted into an animal cell; and ‘chimeras’, in which human cells are mixed with animal embryos.
Scientists say the techniques can be used to develop embryonic stem cells which can be used to treat a range of incurable illnesses.
Three labs in the UK – at King’s College London, Newcastle University and Warwick University – were granted licences to carry out the research after the Act came into force.
All have now stopped creating hybrid embryos due to a lack of funding, but scientists believe that there will be more such work in the future.
The figure was revealed to crossbench peer Lord Alton following a Parliamentary question.
Last night he said: ‘I argued in Parliament against the creation of human- animal hybrids as a matter of principle. None of the scientists who appeared before us could give us any justification in terms of treatment.
‘Ethically it can never be justifiable – it discredits us as a country. It is dabbling in the grotesque.
‘At every stage the justification from scientists has been: if only you allow us to do this, we will find cures for every illness known to mankind. This is emotional blackmail.
‘Of the 80 treatments and cures which have come about from stem cells, all have come from adult stem cells – not embryonic ones.
‘On moral and ethical grounds this fails; and on scientific and medical ones too.’
Josephine Quintavalle, of pro-life group Comment on Reproductive Ethics, said: ‘I am aghast that this is going on and we didn’t know anything about it.
‘Why have they kept this a secret? If they are proud of what they are doing, why do we need to ask Parliamentary questions for this to come to light?
‘The problem with many scientists is that they want to do things because they want to experiment. That is not a good enough rationale.’
Earlier this week, a group of leading scientists warned about ‘Planet of the Apes’ experiments. They called for new rules to prevent lab animals being given human attributes, for example by injecting human stem cells into the brains of primates.
But the lead author of their report, Professor Robin Lovell-Badge, from the Medical Research Council’ s National Institute for Medical Research, said the scientists were not concerned about human-animal hybrid embryos because by law these have to be destroyed within 14 days.
He said: ‘The reason for doing these experiments is to understand more about early human development and come up with ways of curing serious diseases, and as a scientist I feel there is a moral imperative to pursue this research.
‘As long as we have sufficient controls – as we do in this country – we should be proud of the research.’
However, he called for stricter controls on another type of embryo research, in which animal embryos are implanted with a small amount of human genetic material.
Human-animal hybrids are also created in other countries, many of which have little or no regulation.
http://www.dailymail.co.uk/news/article-2017818/Embryos-involving-genes-animals-mixed-humans-produced-secretively-past-years.html#ixzz1SuROTM7k

Posted by BytesMaster at 7:15 PM