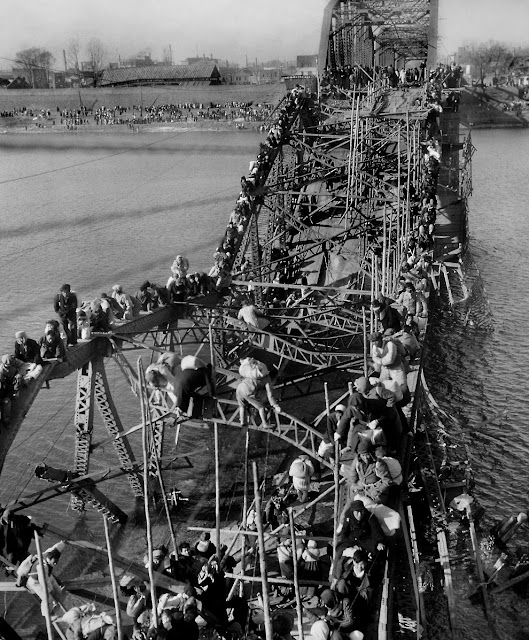 Comments:
Between 1950 and 1953 the US and various other United Nations countries were involved in the Korean War. Younger readers will be more familiar with the war in Korea as the setting of the TV series MASH. Viewers of that show will be aware that the conditions for the Korean civilians were difficult and that winters in Korea get very cold.

Early in the war, in 1950, the UN forces won an important battle, the Battle of Inchon. The US Eighth Army, which made up most of the UN forces, raced towards the Chinese border in pursuit but were defeated at the Battle of Ch’ongch’on River after large numbers of Chinese troops entered the war on the side of North Korea. The UN forces were forced to retreat down the Korean peninsula, the 190km (120 mile) retreat being the longest in US history.

Max Desfor (1913- ), an Associated Press photographer, was travelling with the frontline US troops, even to the extent of taking part in a parachute drop with the 101st Airborne Division.

When the American troops began fleeing south from the combined forces of North Korea and China after the defeat at the Battle of Ch’ongch’on River, Desfor was with them. It was December 1950 during the Korean winter.

In a 2010 commemoration marking the 60th anniversary of the start of the war Desfor recalled:

I liberated a jeep from someone and joined the retreat. With me were [Tom Lambert (AP) and Homer Bigart (NY Times)] and an army signal corpsman. We crossed the Taedong River on a pontoon bridge that had just been hastily erected by the army engineers ... On the south side of the river ... [civilians] were walking across where the ice was solid and clogged the river. A little farther upstream, where the water was still open, they were crossing in small boats. As we jeeped farther southward ... I saw what had been a sturdy span across the river, obviously recently destroyed by aerial bombs ... with Koreans fleeing from the north bank of the Taedong River, crawling through and into and above and onto the broken-down bridge, it was like ants crawling through the girders. They carried what little possessions they had on their heads or strapped to their shoulders, and on the north side I saw thousands more lined up waiting to do the same thing, waiting to crawl and join the rest of them.

Desfor had trouble working his camera due to the plummeting temperatures. Falling off the bridge into the freezing river was likely a death sentence yet the thousands of refugees kept streaming across the bridge. Years after the war Desfor was struck by the "deathly silence" of the scene.

He was surprised at winning the Pulitzer:  "I had no more idea of the fact I'd been entered than I knew what was on the film when I sent it in."

Desfor covered the Pacific Theatre during World War II and was one of the photographers that photographed the Enola Gay crew when it returned from the Hiroshima Atomic Bombing. He was also able to record the Japanese surrender in 1945. After World War II he covered the Indonesian National Revolution in 1946 and the Indian Pakistan Kashmir War in 1947. In 1950 he returned to America after being stationed with his family in Rome, Italy. When war broke out he volunteered to cover the war taking a number of photos but it was the above image that won him a Pulitzer Prize. 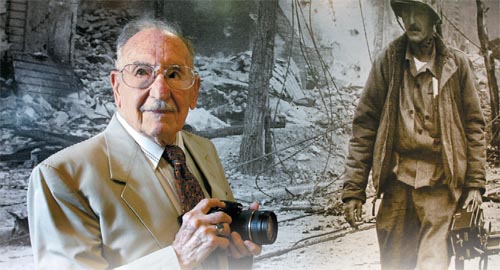 Max Desfor, in front of a photograph taken of him during the Korean War.

Those who wish to have a look at some photographs of various aspects of the Korean War can do so by clicking on the following link:
http://www.boston.com/bigpicture/2010/06/remembering_the_korean_war_60.html

One photo from that site, of an army field hospital, looks very much like the MASH 4077th.  The pic and the caption are: 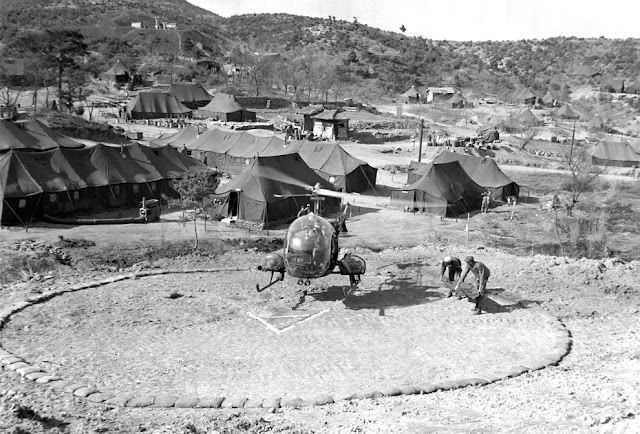 A Bell evacuation helicopter of Marine Observation Squadron 6, carrying wounded Marines from the front lines, lands at "A" Medical Company of the First Marine Division in 1950. Naval corpsmen stand by with stretcher to unload the wounded men from helicopter "pods" and rush them to the operating and hospital tents in the background. (U.S. Department of Defense/TSGT. Charles B. Tyler)