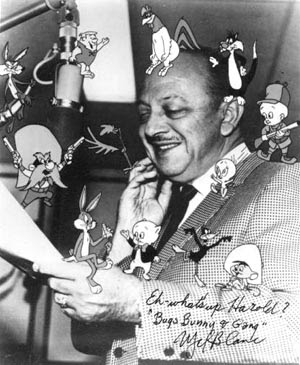 
Mel Blanc was born Melvin Jerome Blank in San Francisco and attended high school in Oregon.  He changed the spelling of his name from Blank to Blanc at the age of 16 after a teacher told him he would amount to nothing, like his name.

Blanc started off in radio as a voice actor and eventually worked with Jack Benny on his radio show in various roles.  One of the most popular was Sy the Little Mexican, who was featured in yesterday’s clip.  That character was later also featured in Jack Benny’s television show.  Blanc was so adept at remaining in deadpan character, giving Sy’s one word answers, that Benny at times found it difficult not to laugh.  That was apparent in yesterday’s clip and also in the following:
http://www.youtube.com/watch?v=O9s8U0O0XPE
Note Benny’s superb use of pauses and silent facial expressions.

Voicing cartoon characters started in 1936 and eventually became Blanc’s main area of work.  After taking over Porky Pig’s voice and introducing Daffy Duck, he joined Looney Tunes, becoming the voice of Bugs Bunny and many others.

Blanc was the originator of the Woody Woodpecker laugh but he was unable to continue voicing that character after he was signed exclusively to Warner Bros.

According to Blanc, his most challenging job was voicing Yosemite Sam.  That voice was rough on the throat because of Sam’s volume and raspiness. Although he reprised several of his classic voices for Who Framed Roger Rabbit (released one year before his death at the age of 81), someone else did the Yosemite Sam and Foghorn Leghorn voices.  Because the Warner characters were borrowed to include in the Disney film, it was one of the few times that Blanc worked for Disney.

Bugs Bunny was known for repeating Jack Benny's catchphrase, "Now cut that out!"

In 1960 after his exclusive contract with Warner Bros expired, Blanc went to Hanna-Barbera, giving voice to Barney Rubble in The Flintstones and Mr Spacely in The Jetsons.

In 1961 Blanc was involved in a near-fatal head-on car accident on Sunset Boulevard.  He was in a coma for three weeks and only came out of it when, after not responding to normal speech, a doctor asked him “How are you today, Bugs Bunny?”  He responded in Bugs’ voice and later credited Bugs Bunny with saving his life.

After his death in 1989, Blanc was buried in Hollywood.  In accordance with instructions in his Will, his gravestone reads “That’s all folks.” 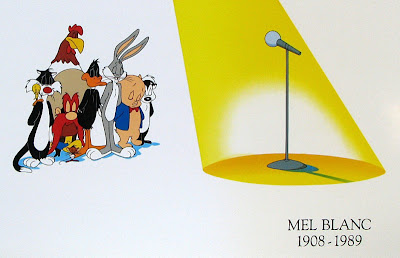