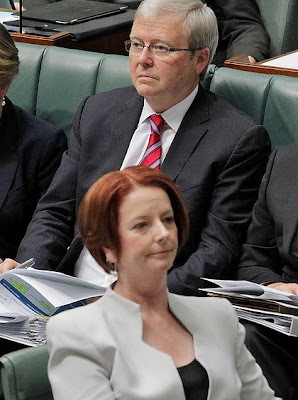 27 February 2012:
Australian Prime Minister Julia Gillard defeated former PM Kevin Rudd in a leadership challenge, thereby retaining the position of Prime Minister.  The vote was 71 – 31 in favour of PM Gillard, who commented afterwards that “the leadership question, is now determined”.  She also stated that the  Australian Labor Party now needed to “move forward”.
In the past 50 years, there have been six previous challenges against a sitting Prime Minister:
1969:

Following a declining Liberal vote and 7% swing in the 1969 election, PM John Gorton was challenged for the leadership by David Fairbairn and William McMahon.  Neither was successful.
1971:
After the resignation of defence minister Malcolm Fraser, who declared in the House that Gorton was “not fit to hold the great office of Prime Minister” (following adverse media comment on his drinking, interest in women and competency), McMahon again challenged for the leadership.  Gorton called a Caucus meeting where a vote of confidence was moved.  The vote was tied, which meant that Gorton would remain PM.  Choosing not to head a divided party that would remain torn by division, he stated "Well, that is not a vote of confidence, so the party will have to elect a new leader" and stood down.  It is not correct that he cast a vote against himself, there was no provision for same in the rules.  McMahon was elected leader and therefore Prime Minister.
1981:
Andrew Peacock resigned as industrial relations minister and challenged Malcolm Fraser, accusing him of “gross disloyalty”.  Peacock lost 54 votes to 27.
1991:
In 1988, Bob Hawke and Paul Keating entered into an agreement at Kirribilli House to resign in favour of Keating after the 1990 election. (Such an agreement has come to be known generally as a Kirribilli Agreement).  Hawke reneged on the deal, declaring Keating “disloyal” and relying on the fact that he was more popular than Keating.  In June 1991 Keating challenged for the leadership but was defeated 64 votes to 44.
1991:
In December 1991, after months of destabilisation of Hawke’s government and growing support for Keating,  Keating challenged again.  This time he was successful, 56 votes to 52.
2011:

In 2007 “Kevin 07” (pronounced Kevin Oh Seven) Rudd had led the ALP to victory, ousting PM John Howard.  The resounding win and swing was dubbed a “Ruddslide” by one paper.  By 2010 that popular support for Rudd and his government had dissipated, primarily due to Rudd’s about face on the promised introduction of carbon trading, the handling of the boat people issue, the economic bungles, a proposed mining tax and adverse comment in confidential US documents.  Following a loss of key factional support, Rudd called for a leadership ballot between himself and his Deputy PM, Julia Gillard, on 24 June 2010.  Realising that he did not have the numbers, Rudd chose not to stand at that ballot,  making him the first Australian Prime Minister to be removed from office by his own party during his first term.

“People really don’t care if politicians attack each other with untrue stories. They figure if you don’t want to get hurt, you shouldn’t have filed for office. They figure whatever happens to us, our lives will be better than theirs.”
-          Bill Clinton
Speech at Campus Progress National Student Conference, July 13, 2005