Wednesday night is always trivia night and, as usual, last night’s questions included a geography question. In this case the question was: 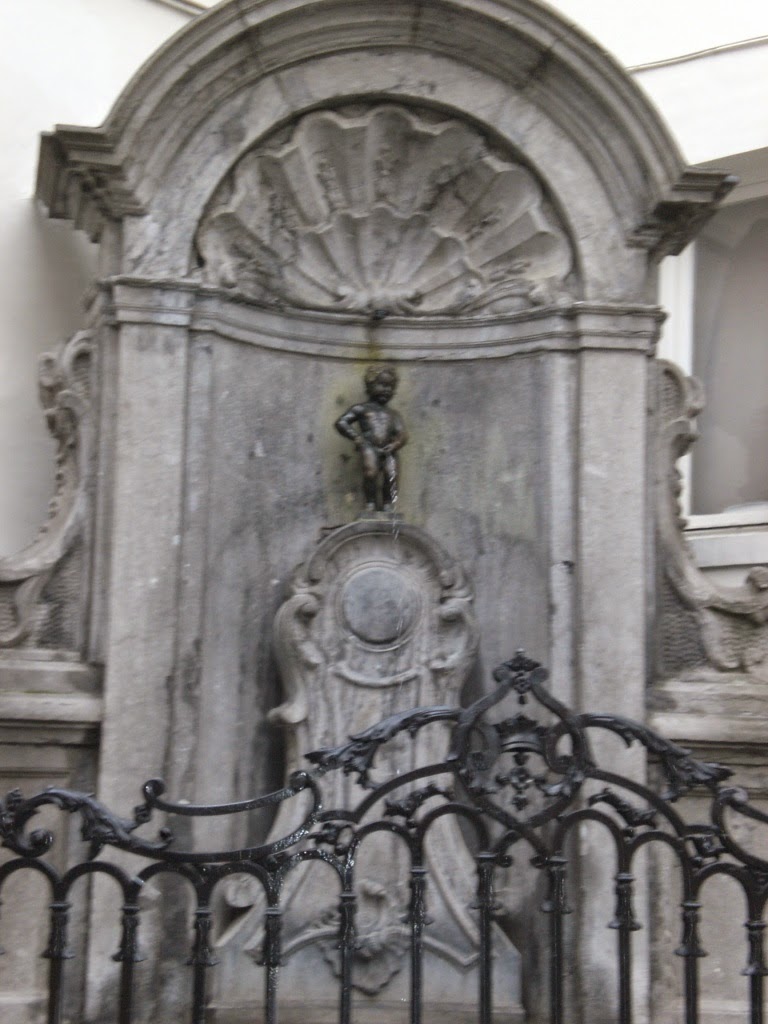 Name the item, name the city and country in which it is located.

I knew this one because my mother had a similar brass statue about 8cm (3 inches) tall that stood on the sill of one of the lounge room windows. It was always referred to in my mother’s native Dutch as "Manneken Pis" (pronounced “mon-ner-ker-peace”, the mon being sounded as in “money”), meaning Little Man Piss”. She had brought it with her from the old country along with other brass and copper objects, long before it became fashionable to collect such things.

* * * * * * *
The statue dates from 1618, which replaced a similar fountain that dated back to 1388, and is located in Brussels. It is 61cm (24 inches) in height and shows a small, naked boy urinating into the basin of the fountain upon which he stands. It is a cultural icon of Belgium, as much as the Liberty Bell for Americans, Ned Kelly’s helmet for Australians and red phone boxes for the British. It is also the spiritual emblem of Brussels. 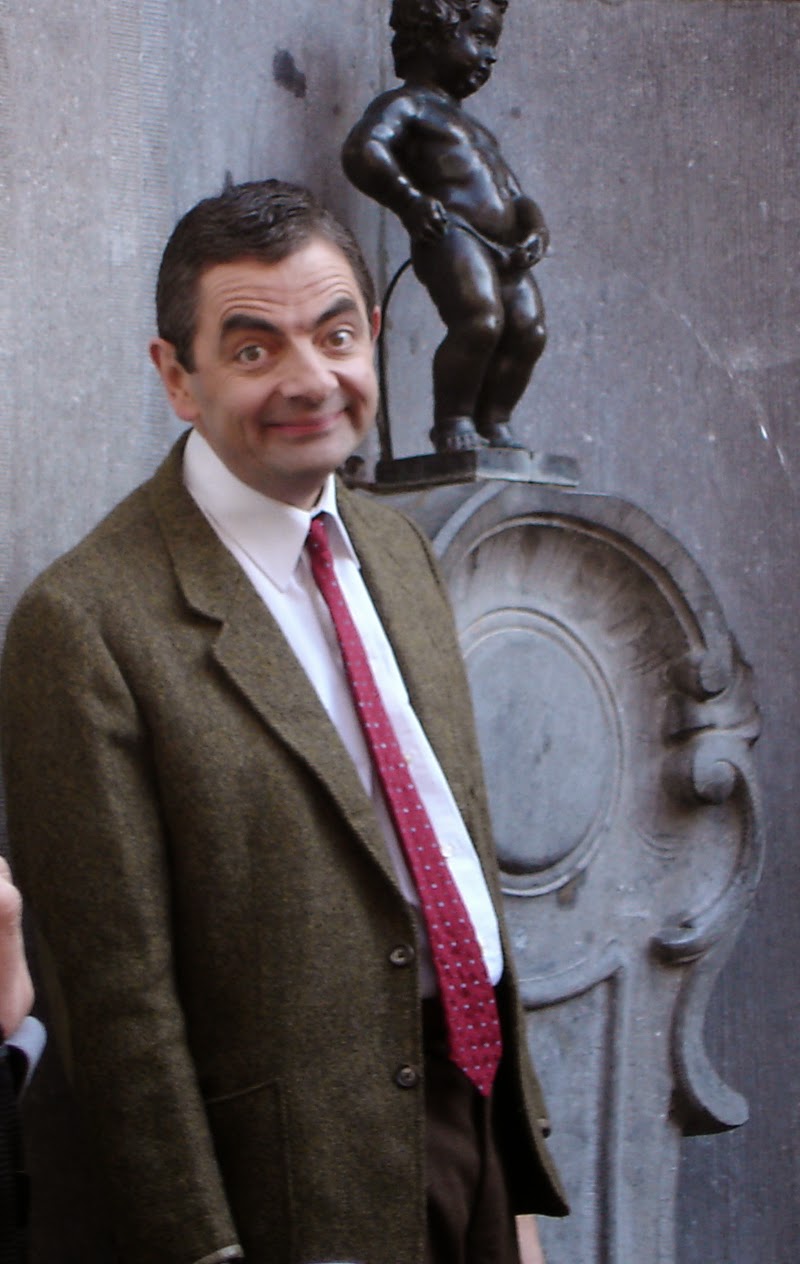 * * * * * * *
As to why a statue in Belgium is known by a Dutch name, the Dutch language is one of the three official languages of Belgium, the other 2 being French and German. Dutch and Flemish are the same language.e

* * * * * * *
There are various legends explaining the origin of the statue, including that the boy’s father was a tourist who lost his son in the city. After receiving help from villagers to find the boy, he gifted this statue to them. Another tale is one where the boy was a spy during a siege of the city and put out a bomb by urinating on the explosives.

* * * * * * *
Several times each week the statue is dressed in costume, according to a published schedule which is posted on the railings around the fountain. His wardrobe consists of several hundred different costumes, many of which may be viewed in a permanent exhibition. The changing of the costume on the figure is a colourful ceremony, often accompanied by brass band music. Many costumes represent the national dress of nations whose citizens come to Brussels as tourists; others are the uniforms of assorted trades, professions, associations, and branches of the civil and military services. 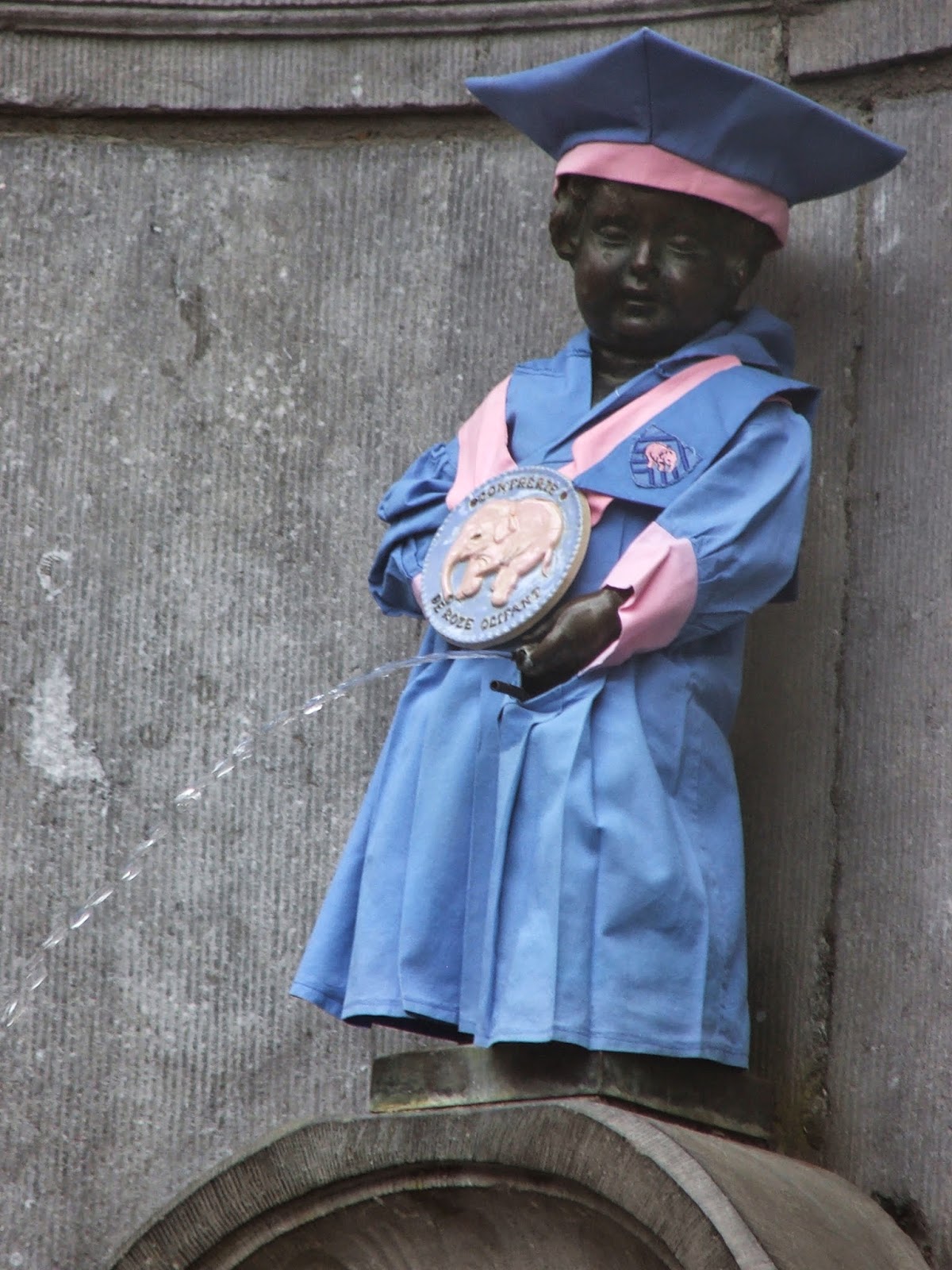 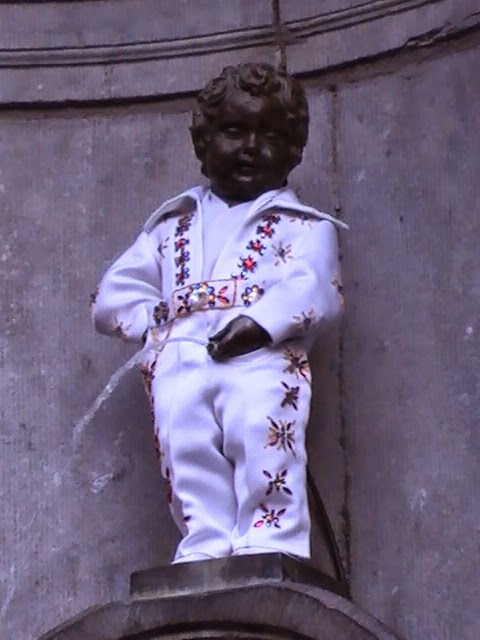 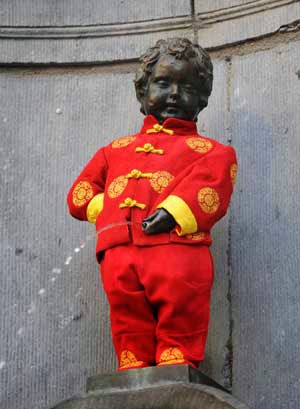 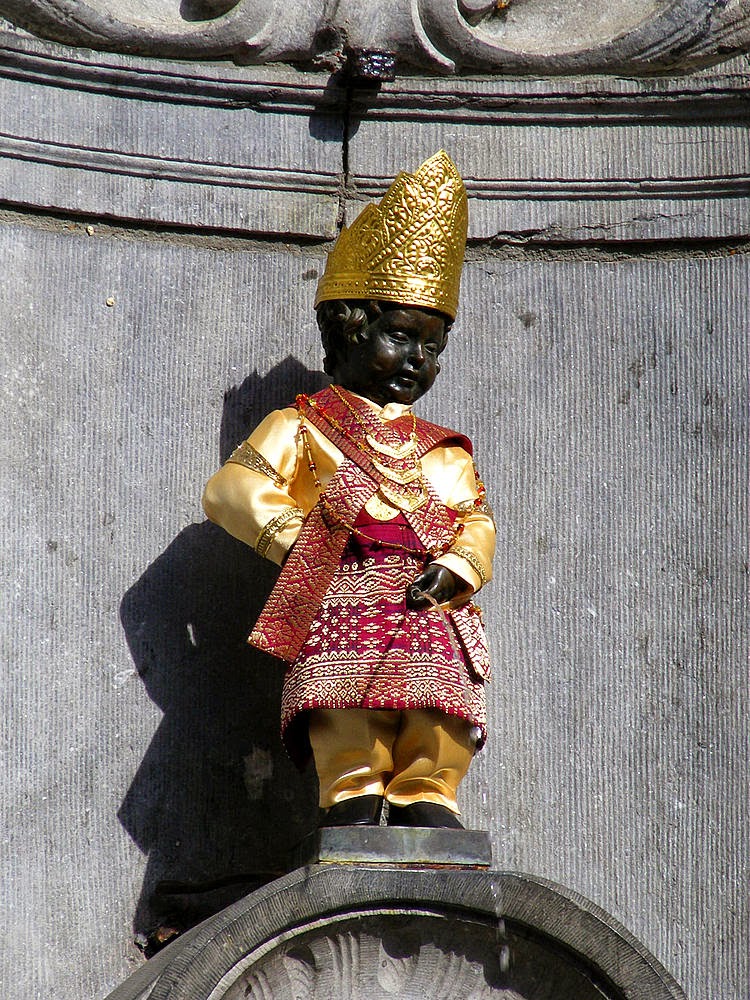 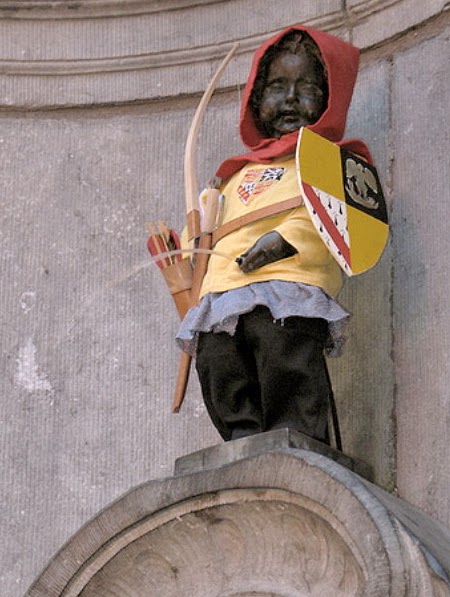 * * * * * * *
On occasion, the statue is hooked up to a keg of beer. Cups will be filled up with the beer flowing from the statue and given out to people passing by. 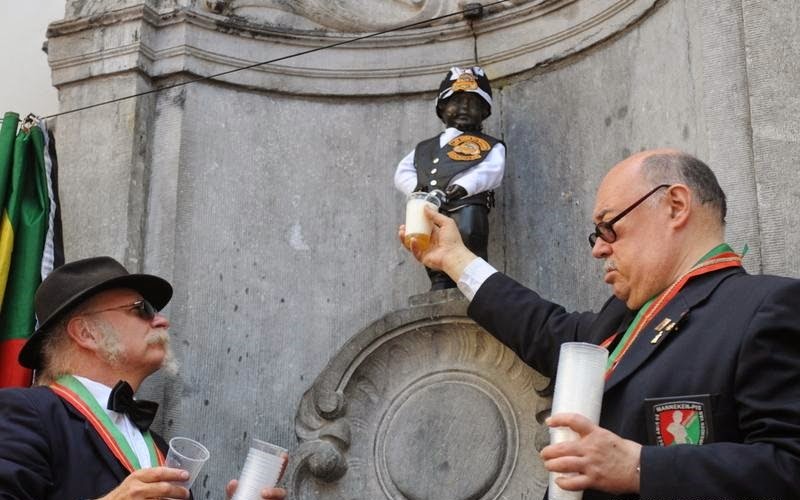 * * * * * * *
In the 80s another statue, Jeanneke Piswas built called Jeanneke Pis to give Manneken Pis a playmate. This other statue is a little girl fountain, but she is lesser known and hides in an alleyway a short distance away from Mannekin Pis. 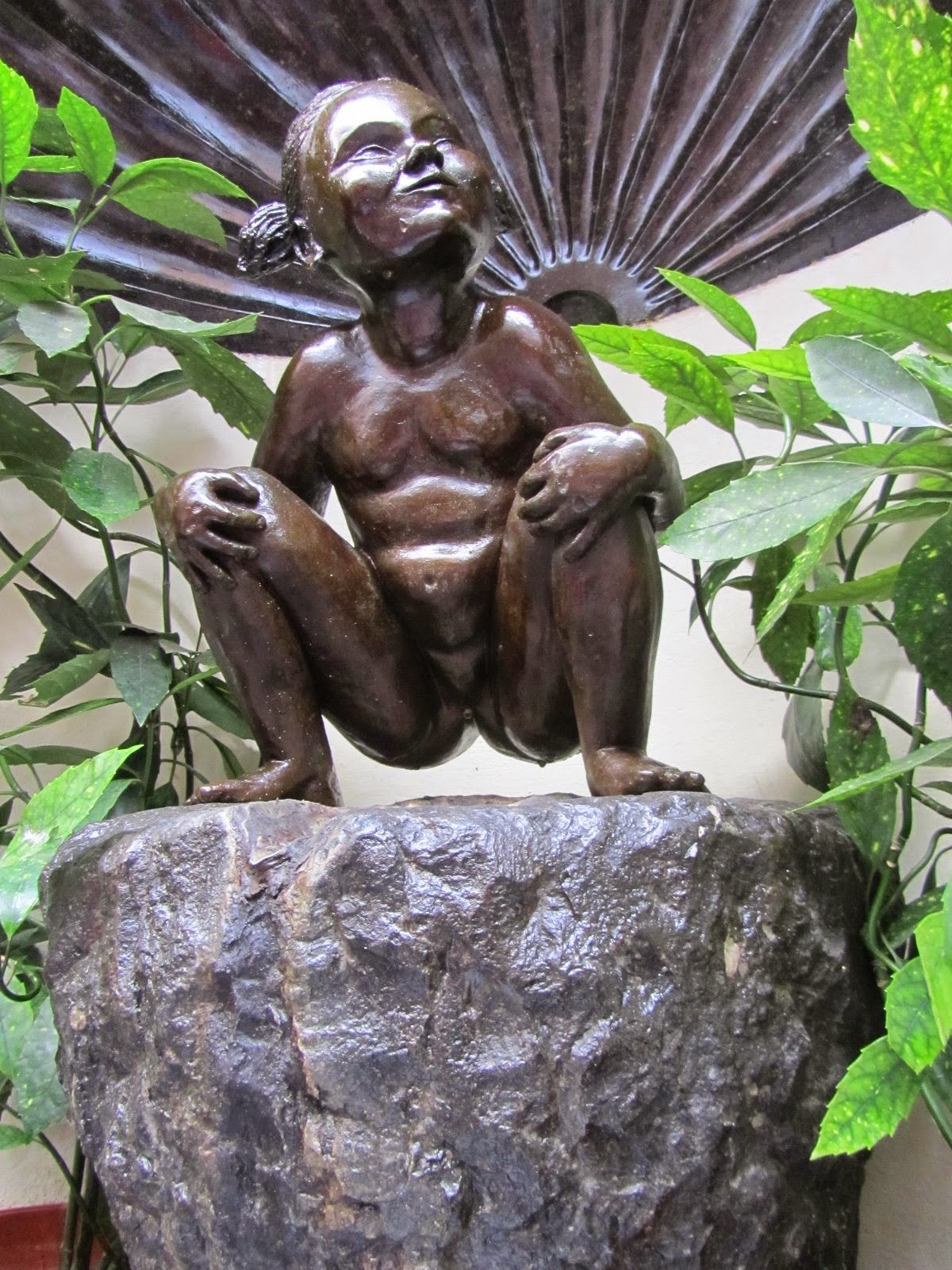 * * * * * * *
In 1998 the burghers of Brussels erected a further urinating statue, Zinneke Pis, this time of a dog. Ulike Manneken Pis and Jeanneke Pis, this one does not discharge water, or beer. 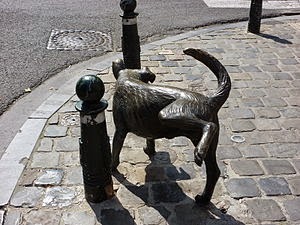