“The only reason people do not know much is because they do not care to know. They are incurious. Incuriousity is the oddest and most foolish failing there is.” 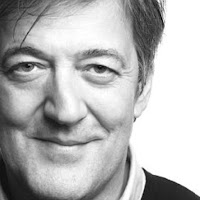 Stephen Fry is an English comedian, actor, writer, presenter and activist. After a troubled childhood and adolescence, during which he was expelled from two schools and spent three months in prison for credit card fraud, Fry secured a place at Queens' College, Cambridge, where he studied English literature. While at university, he became involved with the Cambridge Footlights, where he met his long-time collaborator Hugh Laurie. As half of the comic double act Fry and Laurie, he co-wrote and co-starred in A Bit of Fry & Laurie and also took the role of Jeeves (with Laurie playing Wooster) in Jeeves and Wooster. Fry's acting roles include a Golden Globe Award–nominated lead performance in the film Wilde, Melchett in the BBC television series Blackadder, the title character in the television series Kingdom, a recurring guest role as Dr Gordon Wyatt on the crime series Bones, and as Gordon Deitrich in the dystopian thriller V for Vendetta. He has also written and presented several documentary series, including the Emmy Award–winning Stephen Fry: The Secret Life of the Manic Depressive, which saw him explore his bipolar disorder, and the travel series Stephen Fry in America. He is also the long-time host of the BBC television quiz show QI.

Posted by BytesMaster at 3:07 AM