Something brought to mind the novel/musical/film Les Miserables a few days ago which, in turn, had me thinking about teeth. 'Why?' you may ask. Hence a repost of a Bytes item from February 16, 2013.
It's a bit queasy inducing but quite informative.
------oOo------
Saturday, February 16, 2013
Les Mis and Teeth 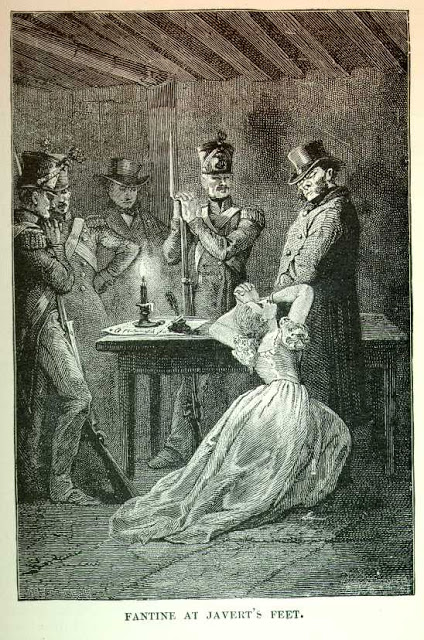 Illustration from the original novel Les Miserables
Those who have seen the Tom Hooper musical film production of Les Miserables will recall Fantine, destitute and desperate, selling first her locket to support her infant daughter, then her hair, then her teeth, then finally herself.
Why, I wondered, would someone in those days have sold their teeth, that being in the novel and thence to the movie but not being a part of the stage musical.
There are other references to extractions and teeth in the music of Les Mis. The rogue Thernardier is described by the drinkers at his inn as having been at Waterloo after the fighting was done to pick the pockets of the dead. Later, as the fleeing Valjean carries the wounded Marius through the sewers., Thenardier is also present, picking the pockets of the corpses and extracting their gold fillings with pliers.
Some comments:

Carved ivory base with human teeth. 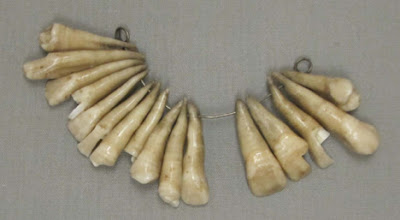 String of human teeth for use in dentures. 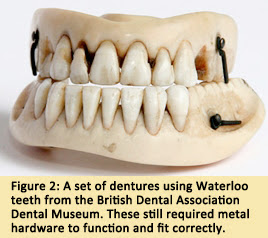 One of George Washington's dentures.
Washington had various dentures made, fashioned of lead,
wire, ivory, bone, and human and animal teeth.
Well someone's got to clean 'em up, my friends
Bodies on the highway
Law and order upside down
Someone's got to collect their odds and ends
As a service to the town!
Well, someone's got to clean them up, my friends
Before the little harvest
Disappears into the mud
Someone's got to collect their odds and ends
When the gutters run with blood.
____________________
Following is an extract from Victor Hugo’s novel Les Miserables:
Background:
Fantine has received a letter from the Thenardiers advising that Cossette has contracted a condition called military fever and that without forty francs for medicine, Cossette will surely die. Fantine is asked by a quack dentist to sell her teeth and offers her two gold napoleon coins, the equivalent of forty francs. She consults her friend, marguerite, and is told that there is such a condition as military fever that does prove fatal to many, especially to children.)
Extract:

That evening she went out, and was seen to turn her steps in the direction of the Rue de Paris, where the inns are situated.
The next morning, when Marguerite entered Fantine's room before daylight,—for they always worked together, and in this manner used only one candle for the two,—she found Fantine seated on her bed, pale and frozen. She had not lain down. Her cap had fallen on her knees. Her candle had burned all night, and was almost entirely consumed. Marguerite halted on the threshold, petrified at this tremendous wastefulness, and exclaimed:—
"Lord! the candle is all burned out! Something has happened."
Then she looked at Fantine, who turned toward her, her head bereft of its hair.
Fantine had grown ten years older since the preceding night.
"Jesus!" said Marguerite, "what is the matter with you, Fantine?"
"Nothing," replied Fantine. "Quite the contrary. My child will not die of that frightful malady, for lack of succor. I am content."
So saying, she pointed out to the spinster two napoleons which were glittering on the table.
"Ah! Jesus God!" cried Marguerite. "Why, it is a fortune! Where did you get those louis d'or?"
"I got them," replied Fantine.
At the same time she smiled. The candle illuminated her countenance. It was a bloody smile. A reddish saliva soiled the corners of her lips, and she had a black hole in her mouth.
The two teeth had been extracted.
She sent the forty francs to Montfermeil.
After all it was a ruse of the Thenardiers to obtain money. Cosette was not ill.