FROM THE VAULT: 5 MINUTES OF ART 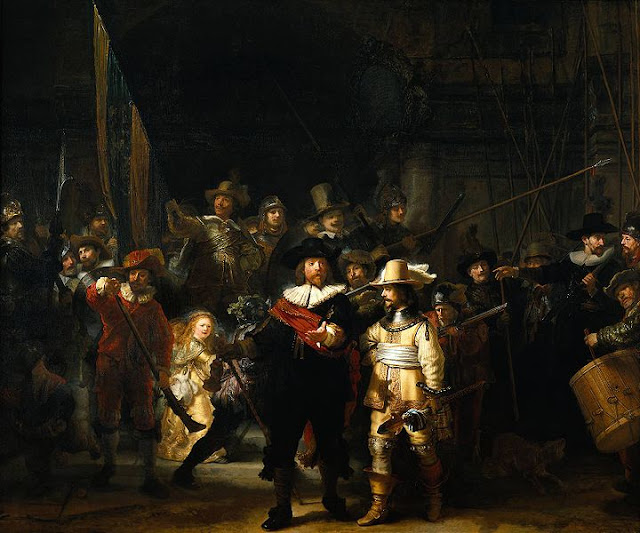 Commonly called De Nachtwacht - The Night Watch, - the painting’s correct title is The Company of Frans Banning Cocq and Willem van Ruytenburch.
-----oOo-----
Painted by Rembrandt (1606-1669) in 1642, it is considered to be one of his masterpieces.
-----oOo-----
This painting has been listed as the fourth most famous in the Western world, after the Mona Lisa, the Last Supper and the ceiling of the Sistine Chapel.
-----oOo-----
The painting is renowned for 3 elements:
- its size (363 x 437 cm ~ 11ft 10in x 14ft 4in);
- the effective use of light and shadow;
- its depiction of a moment using movement that would ordinarily have been a static pose.
-----oOo-----
The painting depicts a militia company moving out, possibly on a shooting expedition.
Militia paintings at the time were common, whereby militia companies were painted for record and display purposes. The militia members paid the artist concerned. In the case of The Night Watch, the painting is believed to have been commissioned by the Captain and 17 members of his civic militia guards, whose names appear on the shield in the centre right background. The names were added to the shield by another hand after the painting was completed. The drummer was hired and was allowed in for free. Each person paid 100 guilders to be in the painting, a large sum at the time.
-----oOo-----
The title The Night Watch is incorrect insofar as it was neither “Night” nor “Watch”.
For most of its existence the painting was coated with layers of heavy, dark varnish. In addition it was coated with soot and grime from being hung above an open fireplace. The resulting dark look of the work led people to be believe that the light in the painting was moonlight, hence the tern The Night Watch, the assumption being that the militia company was departing on watch duty. The varnish was removed in the 1940’s, revealing the brighter colours originally used by Rembrandt and also that the light is from sunlight, indicating a daytime scene.
-----oOo-----
By the time of the creation of Rembrandt’s painting, there was no longer any need for the militia guardsmen depicted to defend the city ramparts or to go out on watch. The meetings of the militia companies had become largely social and sporting affairs, so that the company depicted in The Night Watch was probably heading out to the fields for a shooting contest or to take part in a parade.
-----oOo-----
Most militia paintings at the time showed the company members in formal static poses, often standing in rows or seated at a banquet. Rembrandt’s depiction was revolutionary in turning the traditional group portrait into a blaze of colour, light and motion. His work not only depicts the various subjects in various action poses, it integrates each such individual figures and scenes into an overall, unified whole.
-----oOo-----
The three major characters in the painting, the Captain, the Lieutenant and the little girl, are superbly illuminated in the sunlight coming into the inside of the building. The use of light and shadow draws the eyes to the central characters, emphasising and subduing as needed.
-----oOo-----
In 1715 the painting was moved to the Amsterdam Town Hall and was cut down on all 4 sides to fit the painting between two columns, a common practice in the 19th century. Some of the figures removed thereby had been used by Rembrandt to indicate forward motion. . A 17th century copy of the painting by Gerrit Lundens at the National Gallery, London shows how it looked originally: 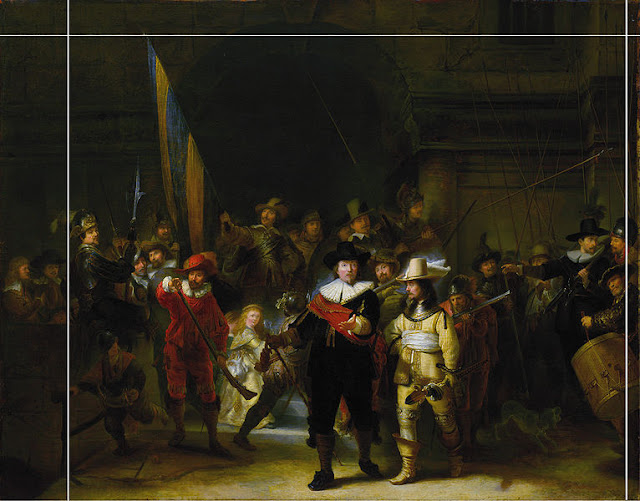 -----oOo-----
In September 1939, just before the outbreak of WW2, the canvas was detached from its frame, rolled around a cylinder and stored in a castle in Medemblik, north of Amsterdam.
-----oOo-----
In 1975 unemployed school teacher, Wilhelmus de Rijk, slashed the painting with a bread knife, resulting in large zig-zag slashes, whilst shouting “I have been sent by the Lord!” It was successfully restored but some damage is still observable close-up. De Rijk committed suicide in April 1976.
-----oOo-----
In 1990 it was sprayed with acid from a concealed pump bottle by an escaped psychiatric patient. Security guards immediately sprayed water onto the painting and the acid penetrated only the varnish layer. Released nine years later, the same man cut a circular hole in Picasso’s Femme Nue Devant Le Jardin.
-----oOo-----
Bonus Trivia:
The painting shows Captain Frans Banning Cocq as the central figure, hand outstretched in front of his lieutenant, Willem van Ruytenhurch.
What is of interest is the positioning and shape of the lieutenant’s phallic lance and the shadow of the Captain’s hand seemingly grabbing at his lieutenant’s crotch: 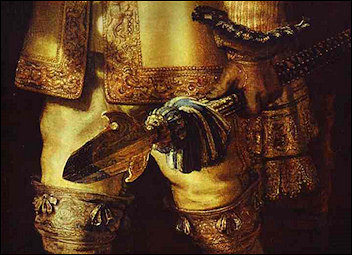 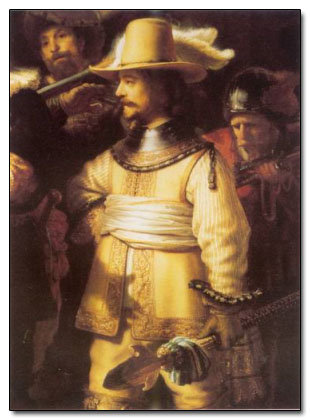 Accidental? It can hardly have escaped Rembrandt’s notice, the details of everything else having been so carefully painted and the figures being so prominent. A joke? A subtle statement or disclosure? Nothing is known.

Posted by BytesMaster at 2:13 AM