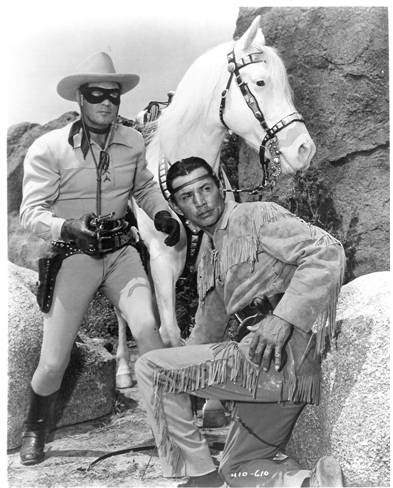 Byter Brett R sent me a message “I remember your column on this from, um...some time ago and thought you might be interested.” Accompanying this message was a link to an article in the Native American Encyclopedia entitled “What is the meaning of Kemosabe or Kemo Sabe?”

Here is the link and the article:

“Kemosabe,” also spelled “Kemo Sabe” or “Kemo Sabhay”… What is the meaning of this expression that became such a memorable part of the Lone Ranger series?

Fran Striker, who wrote the original Lone Ranger scripts, was also the person who answered the fan letters to the Lone Ranger. He always started his replies with… “Ta-i ke-mo sah-bee” (Greetings trusty scout, according to him).

There have been numerous other suggestions regarding the meaning of this term: “Kemo Sabe” is often reported to mean “stupid white man.” However, I think the people who think that are actually confusing kemosabe with Tonto, which means “stupid” in Spanish.
Dr. Goddard, of the Smithsonian Institution, was reported as believing that Kemo Sabe was from the Tewa dialect. He supported his contention by calling on the “Ethnogeography of the Tewa Indians” which appeared in the 29th Annual Report of the Bureau of American Ethnology (1916). It seems that in Tewa, “Apache” equates to Sabe and “friend” to Kema.

Another souce states that kemosabe means “white shirt” in Apache.
A scholar from the University of California at Berkley thought that Kemo Sabe came from the Yavapai, a dialect spoken in Arizona and meant “one who is white,” since the Ranger always wore a white shirt and trousers in the earliest publicity photos. The Yavapai term is “kinmasaba” or “kinmasabeh.”

Jim Jewell, who directed “The Lone Ranger” until 1938 said he’d lifted the term from the name of a boys’ camp at Mullet Lake just south of Mackinac, Michigan called Kamp Kee-Mo Sah-Bee. The camp had been established in 1911 by Jewell’s father-in-law, Charles Yeager, and operated until about 1940. Translation of kee-mo sah-bee, according to Jewell was “trusty scout.”

According to Rob Malouf, a grad student in linguistics at Stanford, there’s another possibility: “According to John Nichols’ Concise Dictionary of Minnesota Ojibwe, the Ojibwe word `giimoozaabi’ means `to peek’ (it could also mean `he peeks’ or `he who peeks’). Rob continued: “There are several words with the same prefix [giimooj, secretly] meaning things like `to sneak up on omeone’…. It is quite plausible that `giimoozaabi’ means something like `scout’…. `Giimoozaabi’ is pronounced pretty much the same as `kemosabe’ and would have been spelled `Kee Moh Sah Bee’ at the turn of the century.”

The Alberta Elders’ Cree Dictionary includes kiimootaapiwin ‘the act of peeking’ or ‘a Peeking (or Peeping) Tom.’.This recognizably employs kiimoot- ‘secretly’ and -aap-.’to see’. The -iwin is apparently the singular inanimate noun (NI) final. Cree is yet another Algonquian dialect continuum, but north of Ojibwe, so forms with a similar morphology and meaning are apparently fairly widely attested in Great Lakes region Algonquian, though the Potawatomi and Ojibwe versions are more consistent with Kemosabe in form.

In his book of humour and observation, noted columnist James Smart observes that the New York Public Library defines “Kemo Sabe” as meaning Soggy Shrub in the Navajo language. His entertaining collection is appropriately titled “Soggy Shrub Rides Again and other improbabilities.”

An interesting side light comes from the son of Fran Striker, “It is usually assumed that Kemo Sabe is how the Ranger refers to Tonto. However, in many of the early radio broadcasts, the Ranger calls Tonto “Kemo Sabe” AND Tonto also calls the Ranger “Kemo Sabe”.
Another suggestion has been that Tonto, (whose name means “stupid” according to some interpretations) responded by calling the Lone Ranger “qui no sabe” which roughly translates from Spanish as “he who knows nothing” or “clueless.

The closest thing to Tonto in Ojibwe is perhaps dende ‘bullfrog’, with a nod to Michael McCafferty (p.c.) for suggesting it. A related form occurs in Potawatomi gchidodo (gchi- is ‘big’, -dodo is the ‘frog’ part). The form offered here has been respelled in modern fashion by David Costa (p.c.) from Gatchet’s fieldnotes.) In fact, in some Algonquian languages ‘bullfrog’ is actually something like tonto- or dondo-, but, unfortunately for our purposes, the word loses the n in Potawatomi, and changes vowels from o to e in Ojibwe.

One of Gary Larson’s Far Side cartoons shows the Lone Ranger looking in an Indian dictionary and discovering that kemosabe is “an Apache expression for a horse’s rear end.”

Back in 1969, Jay Silverheels, who played Tonto in the long running TV series of The Lone Ranger, appeared on The Johnny Carson Show in a skit where Tonto was seeking employment.  Johnny Carson played the personnel officer interviewing him. Hear it at:
https://www.youtube.com/watch?v=J8uSUcAFiXc

As part of such sketch he is asked about previous employment. Tonto replies "I work thirty years as faithful sidekick for kemosabe.  Hunt, fish, make food, sew clothes, sweep up, stay awake all night, listen for enemies for kemosabe. Risk life for kemosabe. Thirty lousy years.” When Carson wonders why Tonto’s former employer let him go, the once-faithful sidekick replies, “Him find out what kemosabe mean.” 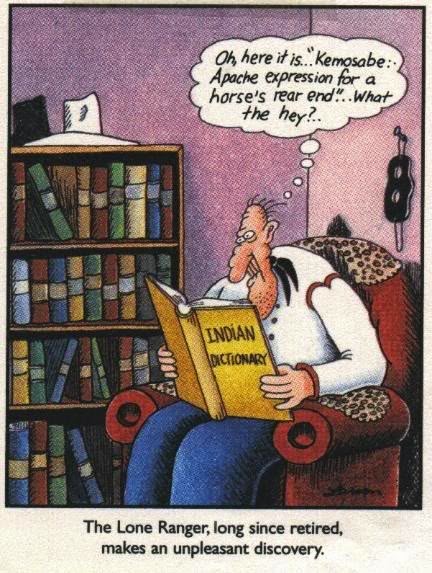 Click on the following to look at some vintage advertising for Jeno's Pizza Rolls with appearances by Clayton Moore as The Lone ranger and Jay Silverheels as Tonto . . . In 2005 the Canadian Supreme Court declined to hear the above application. Dorothy Moore had complained to the Nova Scotia Human Rights Commission that her boss and a co-worker calling her “Kemosabe” was discriminatory because she was Mi’kmaq Canadian Indian and it was used in a demeaning way by them. The employer argued that it meant “faithful friend”, that it was used in this context and that he referred to others by that name as well. The HRC ruled that she had not shown that the term was “notoriously offensive” and dismissed the complaint. This was upheld by the Appeal Court. The HRC sought a ruling from the Canadian Supreme Court to “help establish clearer guidelines for dealing with discrimination and the cultural differences one finds in a diverse workplace." The Supreme Court declined but gave no reasons.

Posted by BytesMaster at 1:56 AM