Continuing some past bizarre moments in sport, following on from the 2018 World Cup Japan/Poland and Belgium/England black marks:

The first part of the World Cup (football for the purists, soccer for the argumentative) is the group stage. Each group has four teams that play each other, with three points for a win, one point for a draw and no points for a loss. The top two teams advance past the group stage and the bracket continues with single-elimination games.

These days the 4 teams in the group play simultaneously, so that advancing to the next group depends not only on a team’s own performance but also on the outcomes of the other games.

That was not the case in 1982.  At that time matches were played sequentially, one after the other, so that teams were aware of the standings of other teams and points needed to advance.  In addition, bizarre rules that related to the number of goals scored also affected the outcomes.

In the last match of the 1982 FIFA World Cup, Group B, West Germany was to meet Austria.  A West German victory by 1 or 2 goals would result in both teams advancing to the next group.   If Germany scored less goals than that, it was out; any more and Austria was out, with Algeria advancing.

When Germany and Algeria had met earlier in the group matches.  It had been expected that a German win was a certainty, Germany being the reigning world champions with a squad containing numerous internationals and elite players.  Algeria, a country which had never previously been to a World Cup, prohibited its players from leaving the country before age 28.

The Germans were so confident of victory that one German player declared at the press conference before the match that "We will dedicate our seventh goal to our wives, and the eighth to our dogs.”  Another stated that he would play the game with a cigar in his mouth

In the shock upset of the Cup, Algeria defeated Germany 2-1.

In the match between Germany and Austria, Germany scored after 10 minutes to make the score 1-0. 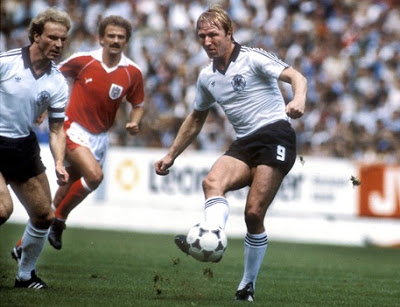 According to a commentary on that match from The Guardian in 2010:

In the 10th minute of that match Horst Hrubesch put the Germans in front. Then … nothing happened. Realising the scoreline suited both of them, Germany and Austria effectively stopped playing. In the ensuing 80 minutes there were no shots, and barely any tackles, crosses or sprints. The game was no longer a contest, it was a conspiracy. The teams' cynicism provoked universal scorn.
A smattering of Algerian fans in the Gijón crowd burned peseta notes to show their suspicions of corruption, while most of the Spaniards in attendance waved hankies throughout the second half in a traditional display of disdain. The next day newspapers in Spain denounced "El Anschluss" and there was outrage in Wst Germany and Austria too. Eberhard Stanjek, commentating for the German channel ARD, almost sobbed during the match as he lamented: "What is happening here is disgraceful and has nothing to do with football. You can say what you like, but not every end justifies the means." The Austrian commentator, meanwhile, told viewers to turn off their sets and refused to speak for the last half-hour. Former West German international Willi Schulz branded the German players "gangsters".
The gangsters, however, were unapologetic. When German fans gathered at the team hotel to protest, the players responded by throwing water bombs at them from their balconies.
Even less bothered was the head of the Austrian delegation, Hans Tschak, who made these extraordinary comments: "Naturally today's game was played tactically. But if 10,000 'sons of the desert' here in the stadium want to trigger a scandal because of this it just goes to show that they have too few schools. Some sheikh comes out of an oasis, is allowed to get a sniff of World Cup air after 300 years and thinks he's entitled to open his gob."
Did the Algerian players take offence? Not at all, Merzekane [the Algerian fullback] says. "We weren't angry, we were cool," he says. "To see two big powers debasing themselves in order to eliminate us was a tribute to Algeria. They progressed with dishonour, we went out with our heads held high."
From all over the world came calls for FIFA to punish the Europeans or stage a replay, but in the end all the world's governing body did was rule that henceforth the last pair of games in every group must be played simultaneously. "Our performances forced Fifa to make that change, and that was even better than a victory," Belloumi says. "It meant that Algeria left an indelible mark on football history."
http://www.guardian.co.uk/football/2010/jun/13/1982-world-cup-algeria

And the ultimate winner?  Italy defeated West Germany 3-1 in the final.

Indonesian clubs PSS Sleman and PSIS Semarang were disqualified from the country's first division play-offs for scoring five own goals. Sleman won the game 3-2, but a committee decided both sides attempted to lose in order to avoid a semi-final match with Borneo FC, a club rumoured to be backed by a local mafia.

The game was scoreless until the 86th minute before Sleman score two own goals in quick succession, Semarang then scored three own goals and lost the match.

Both clubs were disqualified.

AS Adema won the match 149-0 without gaining possession between the first goal and the 149th.

Their opponents, Stade Olymique L'Emyrne (SOE), deliberately kicked the ball into the back of their own net 149 times in protest over refereeing decisions that had gone against them during a four-team playoff tournament.

Following the match, the Fédération Malagasy de Football suspended the SOE coach, Zaka Be, for three years.  Four of the team's players were suspended until the end of the season and banned from visiting stadia for the same period. All the other players, from both teams, received a warning and a threat of more serious action should they commit further offenses. The referee was not punished.

A similar report from Byter David B in England:

Your Bytes on farcical football matches reminded me of an equally farcical cricket match played in 1979.  The final group match in the B&H cup between Somerset and Worcestershire.  Before the match Somerset were in the position that if they lost the match they would be equal on points Worcester and the game would be decided by the team with the best  bowling strike rate which , before the match was, Somerset.   The Somerset Captain, Brian Rose won the toss and chose to bat first , declaring after one over with a score of one.  Worcester duly won the match with a score of two but lost the group as a score of 2-0 made negligible impact on the strike rate.

However justice was done, An enraged Test and County Cricket Board expelling Somerset from the competition on the grounds of bad sportsmanship and later changed the rules to prevent a reoccurrence