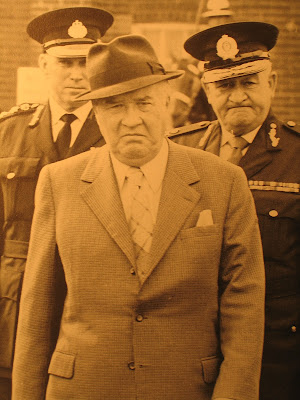 I came across the above photograph in a book of news photographs. I apologise for the quality in that it is a photograph I have taken of the photograph in the book, in that I was unable to locate the original on the internet.
The person in the photo is of a past NSW Premier , Robert Askin.
The photo was taken in 1973 whilst Askin reviewed police cadets at Sydney’s Redfern Police Academy and it shows Askin flanked by NSW Police Commissioner Fred Hansen (right) and Chief Superintendent Harry Griffin. Reportedly Askin hated the photo - Askin and senior police officers were associated with high level corruption and the photo made Askin look like a 1920’s Chicago mobster with 1920’s crooked cop partners.
The photo started me thinking about Premiers of NSW.
Back in my younger days, being Premier of NSW counted for something. Premiers didn’t have use by dates and weren’t changed every 18 months as a response to popularity polls. And they had balls. This is not a reference to NSW’s current premier, Kristina Kerscher Keneally, although some of the Premiers of the past would no doubt have been aghast at the thought of a woman at the helm of the NSW ship of state, much less one who is half a Yank and who has another woman, Carmel Tebbutt, as her deputy.
Take Neville “Nifty” Wran, who was Premier from 1976 to 1986. Nifty was called before the Street Royal Commission in 1983 on an allegation of seeking to influence the magistracy regarding the committal of his mate, Rugby League boss Kevin Humphries, on misappropriation allegations. Nifty had been forced to stand down from his position as Premier whilst the allegations, made by Four Corners, were investigated. Did Nifty feel sorry for himself? No sirree. He told the Commission that “Balmain boys don’t cry.” On another occasion he used a metaphor that is still in use today. In 1983 Nick Greiner became leader of the NSW Opposition. Asked his opinion, Nifty said that Greiner looked good but was he ready “for the blowtorch on the belly?”
Which brings me to Bob Askin (1907-1981), who was Premier from 1965 to 1975. Born Robin Askin, he changed it to Robert in 1971. No pansy names for our Bob.
(A digression. My father was a housepainter who painted for various builders. I went to work with him through high school and uni, getting to know many of the tradies working in the “building game” as it was generally referred ro. One such person was Bob Wiley (I have changed the last name to protect privacy), the brickie, who was also a friend of my father’s. After I had qualified and become a solicitor, I was asked to act for Bob and his wife on a conveyance. The conversation went like this:
Myself: “The purchaser is shown as Bob Wiley, so that would be Robert?”
Mrs Wiley: “No, it’s Eugene.”
Myself: “Eugene? I have always known him as Bob, everyone does. Why is he called Bob if his name is Eugene?”
Mrs Wiley: “When he turned up for his first day of work as an apprentice, the foreman asked ‘What’s your name, son?’ Bob said ‘Eugene’. The foreman said “Not on this site it’s not, you’re Bob’ and it’s been Bob ever since.”)
Askin’s win for the Libs in 1965 ended 25 years of Labor domination in NSW.
Early on Askin came into conflict with Joern Utzon, the Danish architect responsible for construction of the Sydney Opera House. Askin saw Utzon as a dreamer with designs, but no grounding in reality and costings. Utzon saw Askin as a bureaucrat with no vision. Ultimately Utzon took his drawings and flew back to Denmark unannounced, never to return. Askin and the Department of Public Works finished the project.
During their period of government, Askin and Co were responsible for numerous reforms and changes:
- removal of trading hours restrictions on small business;
- extended hours for liquor trading, thereby ending the “6 o’clock swill”;
- abolition of juries in motor vehicle accident cases;
- establishment of a law reform commission;
- the introduction of consumer laws;
- establishment of an ombudsman;
- introduction of legal aid;
- compulsory health labels on cigarette packs;
- breath-testing of drivers;
- limits on vehicle emissions;
- compensation for victims of violent crime;
- creation of a National Parks & Wildlife Service;
- a boost to transport and secondary industry;
- rapid escalation of building development in inner-city Sydney and the central business district, which followed in the wake of his controversial 1967 abolition of Sydney City Council.
On the debit side:
- Askin’s government’s countenance of a brutal prison regime resulted in the Bathurst prison riots;
- proposals were advanced for a massive freeway system through the inner city suburbs, including historic areas such as Newtown and Glebe;
- an ambitious program of slum clearance would have resulted in the demolition of Wolloomoolo and The Rocks, being stopped only by Jack Mundey’s Green Bans;
One of Askin’s more controversial moments resulted from a 1966 visit of the US President Lyndon Baines Johnson to Australia. As Askin sat next to LBJ during a motorcade through Sydney, demonstrators and protestors against the war in Vietnam threw themselves in the path of LBJ’s limousine. In 1968 during an address to the United States Chamber of Commerce at a lunch in Sydney, Askin took delight in revealing that he had turned to LBJ at that moment and said “Run the bastards over.”
This gave rise to a protest song to the tune of “Battle Hymn of the Republic”, often sung at peace protests thereafter:

Towards the end of his career and after his death, Askin was increasingly associated with corruption. In what may well be a scenario for Underbelly, Askin is now largely credited as being the head of a network of corruption and bribery that involved politicians, public servants, police and the Sydney organised crime syndicates. 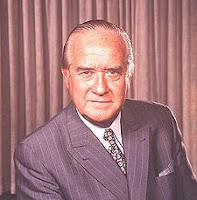