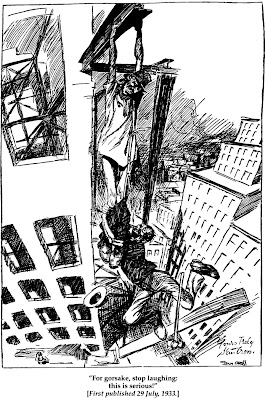 (Click on cartoon to enlarge).
Some of you may be familiar with the above in that it has been reproduced as a spray can graffiti on the side of a building in Cleveland Street as you drive towards Moore Park.
The cartoon is regarded as Australia's most famous, and funniest, print cartoon. It is by American born, Australian raised, Stan Cross (1888-1977) and appeared in Smith's Weekly on 29 July 1933. Reflecting that staple of humour, the assault on dignity, the cartoon also struck a chord with a population battered by the Great Depression. They laughed along with the chap hanging off his mate's trousers, which have been pulled down to his mate's ankles.

The cartoon was enlarged and reprinted onto quality paper, selling for two shillings and sixpence. It was displayed on workplace walls, in hotels, barbers shops and shop windows. It was also reprinted in many overseas publications.

In 1945 Virgil Reilly, a staff writer with Stan Cross on Smith's Weekly, saw it on the wall in the quarters of the Japanese commander at Wewak, New Guinea. It had Japanese characters written thereon which were translated as "Japanese braces much better than British braces."
Posted by BytesMaster at 5:20 AM