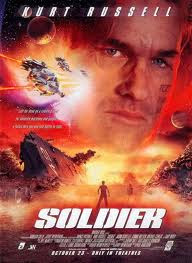 I love this movie and never tire of watching it again.
Made in 1988,it was directed by Paul Anderson and stars Kurt Russell, Connie Nielsen, Jason Isaacs, Jason Scott Lee and Gary Busey.
It’s tagline is “Left for dead on a remote planet for obsolete machines and people, a fallen hero has one last battle to fight.”
Basically it is the movie Shane set in the future.
Now I know that it’s easy to take the piss out of it. Kurt Russell is in the lead, he speaks only 104 words for the whole of the movie although he is on screen for 85% of the time, and he portrays a densitised, automaton style soldier, how appropriate.
Nonetheless the pic is thought provoking and entertaining with Kurt Russell perfect in the role.
It is no wonder that I like it: David Peoples, who wrote the script and who also wrote the script for Blade Runner (one of my personal Top 10), has described the movie as a “sidequel” and spiritual successor to Blade Runner. There are numerous references to that movie, and to other stories written by Philip Dick, the author of the book on which Blade Runner is based.
Unfortunately not everyone shared my opinion. On its release it flopped big time, costing $75m to make but grossing only $15m worldwide.
I find Russell’s depiction of the character of Sergeant Todd to be brilliant. To behave as an automaton and yet depict emotion through the absence of emotion is difficcult but he manages to do it.. The appearance of the tear, his bewilderment as to what it is, touching his cheek and probably initially thinking it is blood, the emotional pain that he cannot understand, are poignant, as is the moment when he holds Nathan, both of them emotionally and physically locked within themselves, pointing to the galaxy as he looks at the boy. The implication is that this boy will not be raised as he was raised, indicated by his holding the boy affectionately.
This movie is deserving of more recognition than it received.
Story:
Soldier is set in the same future time period as Blade Runner.
The movie opens with babies being selected in a maternity ward by a US military officer to become soldiers. Thereafter they are subjected to extreme mental, psychological and physical training. As part of their training towards becoming soldiers, they are densitised to violence. One youth, Todd, appears to be the best in his group. Training finishes at age 17 and thereafter we are briefly shown Todd in action in various battles and encounters.
The movie jumps to Todd at age 40. Another military officer, Colonel Mekum, advises Todd’s commanding officer, Captain Church, that Todd and the other “old ones” are obsolete. Mekum’s genetically-engineered soldiers prove dominant in physical and fighting tests, with Todd being knocked unconscious and believed to be dead. Todd and the other dead soldiers are dumped, with trash, on a garbage-dump planet, Arcadia 234. Todd’s group are relegated to menial assistants and are advised that they are no longer to have the name “soldiers”.
Todd revives. Although injured, he limps away and finds a colony of settlers, the survivors of a crash landing 12 years earlier of a ship taking them to settle on the Trinity Moons. He is taken in by the colonists and treated for his injuries, staying with a couple, Mace and Sandra, and their mute son Nathan.
The colonists are fearful of him and misinterpret some of his ways. He has flashbacks to his battle experiences and almost kills one of the colonists, leading to his being cast out from the settlement. As he settles in a rocket engine nozzle among the garbage, he sheds a tear. He has never cried and does not understand what it is.
When Nathan saves his parents from one of the planet’s deadly species of snakes in a manner shown by Todd, Mace realises that they have made a mistake in casting him out. He seeks out Todd to bring him back.
At the same time Mekum arrives with his soldiers on a training exercise. Discovering that there are people living on the planet, he describes their presence as unlawful and orders them killed. Mace is killed in the initial attack. Todd fights back, using guerrilla tactics, and kills a number of Mekum’s replicant soldiers. Mekum panics, orders that Todd’s old group set up a “planet killer” bomb and prepares to leave. Church refuses to leave because the members of Todd’s former group are not on board. Mekum shoots Church, Todd defeats Caine 607 in combat and reunites with his men, ho follow him. They board the ship with the colonists who have been saved, mostly children and also including Sandra. Confronting Mekum and his aides, they toss them off the ship and escape the planet killer detonation. Todd instructs that they head for the Trinity Moons, the original destination of the settlers.
Todd holds Nathan and the two of them look silently out at the galaxy.
Clips:
There are not many clips from this movie on YouTube.
There is a good trailer for the movie at:
http://www.youtube.com/watch?v=c6PPmyzIBNI
The section dealing with his war and battle experiences is at:
http://www.youtube.com/watch?v=QW57mVNNJM8&feature=related
Some emotional face shots with a lovely musical backing (Loreena McKennit, Night Ride Across The Caucausus), part of the movie's soundtrack, is at:
http://www.youtube.com/watch?v=mGvLIxqPkUs&feature=related
Trivia:
- In the section showing his battles etc there is also a history shown on screen. In that screen history, the following references and citations are made:

- One of the objects sliding of the garbage freighter with all the other rubbish is The Liberty Bell.
- One of the weapons listed for which Todd is trained is the Illudium PU36 ES,M" otherwise known as the Illudium PU36 Explosive Space Modulator. This is the weapon that Marvin the Martian is always threatening to use in the Bugs Bunny cartoons.
- Kurt Russell worked out for 18 months to get ready for the film in that he thought it important to present according to the role. The director made Event Horizon in the meantime.
- Kurt Russell’s 11 year old son Wyatt plays him as an 11 year old.
- Russell broke his ankle early in filming. They therefore filmed the laying and sitting scenes first, then standing scenes, lastly the running scene.
- The snakes used in the film are Thai vipers and are extremely venomous. Stitches can be seen round their mouths to render them safe. They have items glued to their heads for the movie.
Memorable quotes:
Sandra: But one soldier, against seventeen. What are you going to do?
Todd: I'm going to kill them all, Sir.
Sandra: Sgt. Todd... what's it like? What's it like being a soldier? What do you think about?
[silence]
Sandra: You must think about something?
[silence]
Sandra: What about feelings then?
[silence]
Sandra: You must feel something?
[pause]
Todd: Fear.
Sandra: Fear?
Todd: Fear and discipline.
Sandra: Now?
Todd: Always. 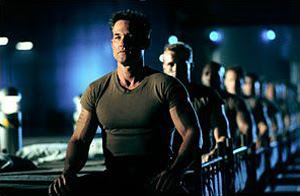 Posted by BytesMaster at 1:56 AM

Email ThisBlogThis!Share to TwitterShare to FacebookShare to Pinterest
Labels: Soldier