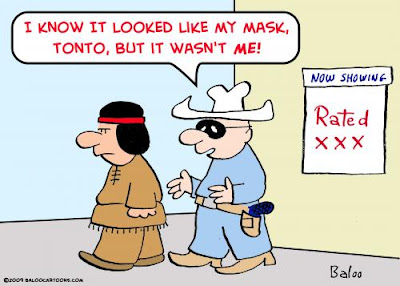 The classic Lone Ranger joke is that which was posted by an anonymous reader in response to the original post.  That person wrote:
There is an old joke about the Lone Ranger and Tonto which (in abbreviated form) goes something like ...

LR and T are chased by a band of renegade Indians. Eventually they are surrounded and the LR says to T "looks like we have had it now old friend", and T responds "what you mean WE whiteman".
The original final line to the joke that I recall was “What do you mean ‘we’, paleface?”
I have also come across another version, probably updated to reflect current languag and attitudes, which uses as the final line “What’s this ‘we’ shit, white man?”  A variation uses the word “whitey” instead of “white man”.

There is also a Loner Ranger version of a joke posted some weeks back . . .
Tonto and the Lone Ranger are riding across the prairie when Tonto gets down from his horse and puts his ear to the ground. He looks at the Lone Ranger and says, "Buffalo come."
The Lone Ranger looks at him and says, "Wow, that's amazing! How did you figure that out?"
Tonto replies "Ear sticky!"

And a variation on a Sherlock Holmes joke:


The Lone Ranger and Tonto are camping in the desert. After they get their tent all set up, both men fell sound asleep.
Some hours later, Tonto wakes the Lone Ranger and says, "Kemo Sabe, look towards sky, what you see?"

The Lone Ranger replies, "I see millions of stars."
'What that tell you?' asks Tonto.


The Lone Ranger ponders for a minute then says, "Astronomically speaking, it tells me there are millions of galaxies and potentially billions of planets. Astrologically, it tells me that Saturn is in Leo. Time wise, it appears to be approximately a quarter past three in the morning. Theologically, the Lord is all-powerful and we are small and insignificant. Meteorologically, it seems we will have a beautiful day tomorrow."
"What's it tell you, Tonto?"

"You dumber than buffalo shit. It means someone stole tent." 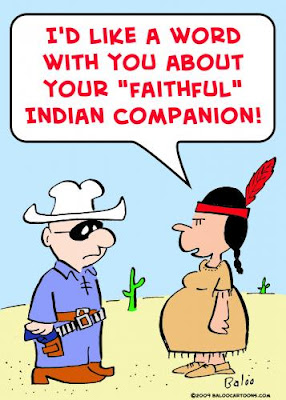 The Lone Ranger is riding Silver across the plains when up ahead he sees Tonto's horse Scout, without Tonto aboard. He rides up to Scout and sees Tonto on all fours with his ear to the ground.

"You can tell all that just by listening to the ground?" the Ranger exclaims, astonished.
"No," Tonto answers, "run over me, half hour ago...."

The Lone Ranger was ambushed and captured by an enemy Indian war party.
The Indian chief proclaims, "So, YOU are the great Lone Ranger" ....
"In honour of the Harvest Festival, You will be executed in three days. Before I kill you, I grant you three requests. What is your first request?'
The Lone Ranger responds, "I'd like to speak to my horse."
The chief nods and Silver is brought before the Lone Ranger, who whispers in Silver's ear.  Silver then  gallops away.
Later that evening, Silver returns with a beautiful blonde woman on his back. As the Indian chief watches, the blonde enters the Lone Ranger's tent and spends the night.
The next morning the Indian chief admits he's impressed. "You have a very fine and loyal horse, but I will still kill you in two days. What is your second request?"
The Lone Ranger again asks to speak to his horse.
Silver is brought to him, and he again whispers in the horse's ear.
As before, Silver takes off and disappears over the horizon.
Later that evening, to the chief's surprise, Silver again returns, this time with a voluptuous brunette, more attractive than the blonde.
She enters the Lone Rangers tent and spends the night.
The following morning the Indian chief is again impressed. "You are indeed a man of many talents, but I will still kill you tomorrow. What is your last request?"
The Lone Ranger responds, "I'd like to speak to my horse, .........alone."
The Chief is curious, but he agrees, and Silver is brought to The Lone Ranger's tent.

Once they're alone, the Lone Ranger grabs Silver by both ears, looks him square in the eye and says, "Listen very carefully!  For the last time, I said ‘Bring POSSE’, not PUSSY."

Posted by BytesMaster at 8:20 PM