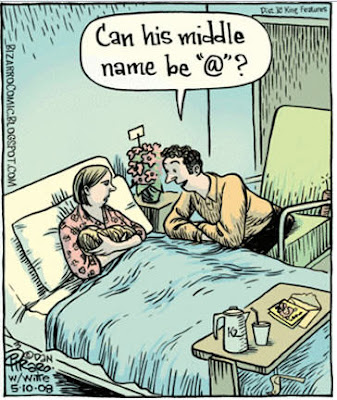 "What's in a name? That which we call a rose
By any other name would smell as sweet."
-          William Shakespeare
Juliet, Romeo and Juliet
Bytes has previously written about New Zealanders naming their kids with weirdo and bogan names.  See:


“Only two things are infinite, the universe and human stupidity,
and I'm not sure about the former.”
-          Albert Einstein-
The willingness to name a kid something weird without thought for consequences is not confined to our Kiwi cousins, the Seppos also have their moments (we in Oz may also have our quota but it is not reported).  In 2009  a child named Adolf Hitler Campbell and his sister Aryan Nation have been taken from their family by child welfare workers. The New Jersey, US, Division of Youth and Family Services removed three-year-old Adolf and his younger sisters, JoyceLynn Aryan Nation Campbell and Honszlynn Hinler Jeannie Campbell (named after SS head Heinrich Himmler) from their home but would not provide reasons.  Dad Heath Campbell claims to be related to a member of the SS.  Mum Deborah also has a normal name.  How did all this come to light?  Because Mum and Dad received publicity for making an issue of the unwillingness of the local cake shop to put the words “Happy Birthday Adolf Hitler” on the child’s birthday cake.  According to aggrieved father Heath:  “Other kids get their cake. I get a hard time.  It's not fair to my children.”
http://www.dailytelegraph.com.au/news/little-hitler-taken-from-parents/story-e6freuy9-1111118571654


"Stupid is as stupid does."
- Forrest Gump
I mention all of this because yesterday’s Daily Telegraph had another item about the Kiwis and their ongoing battle against the inappropriate naming of bogan offspring:
What’s in a name?  New Zealand babies know


If you want to name your newborn Mafia No Fear, V8, Lucifer or Emperor, the New Zealand Internal Affairs Department says no dice. The department, which registers births, recently released a list of disallowed names from the past decade that run the gamut from the unlikely to the inexplicable, the website stuff.co.nz reported. While no names are banned outright, according to deputy registrar-general Ross McPherson they can't be more than 100 characters long, use an unearned title or be offensive to the general public. They also have to be actual words, not numbers or symbols. The most common rejected name was Justice, with 49 sets of parents trying for that moniker, followed by Princess (24) and King (21). Bishop hit the list with seven attempts and Lucufer with six. Also on the reject list were Messiah and Christ.  Others that didn't make the cut included Mafia No Fear, Anal, V8 and the symbol *.  But some of those that did get by the registry, according to the website, were Violence, Chardonnay and Number 16 Bus Shelter.  Perhaps the champion puzzler of a name, Talula Does The Hula From Hawaii, was not registered in New Zealand but was the subject of a court case there.  In 2008, Family Court Judge Rob Murfitt ordered that a girl with that name be taken into court custody so she could change it.  For the record, the most popular names for New Zealand babies in 2011 wre Liam and Ruby..
http://www.dailytelegraph.com.au/news/whats-in-a-name-new-zealand-babies-know/story-e6freuy9-1226238030096

Posted by BytesMaster at 3:12 AM