Continuing a look at the Pulitzer and World Press Photographs of the Year, from inception . . . 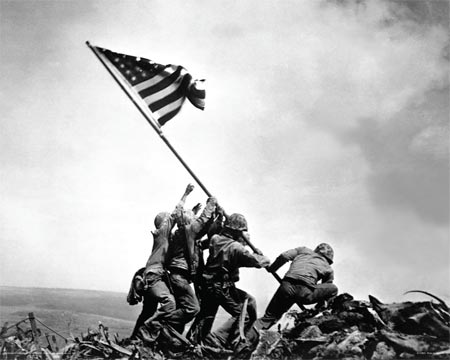 On 19 August 1945 the US invade Iwo Jima, a heavily fortified volcanic island approximately 1,200 kilometres south of Tokyo.  The island was used as an early warning system for bombers attacking Japan and also had strategic value as an emergency landing strip for damaged US bombers.  Most of the fighting was conducted by the Japanese from underground bunkers and pillboxes.


The historic photograph by Joe Rosenthal of the raising of the American flag on Mount Suribachi, a dormant volcanic cone and the highest on the island, is actually of the second flag raising on the mountain.  Early in the morning of 23 February, 1945, Staff  Sergeant Louis R Lowery of Leatherneck magazine had photographed the first flag raising after Suribachi had been captured.  The flag was too small to be seen clearly from the landing beaches. 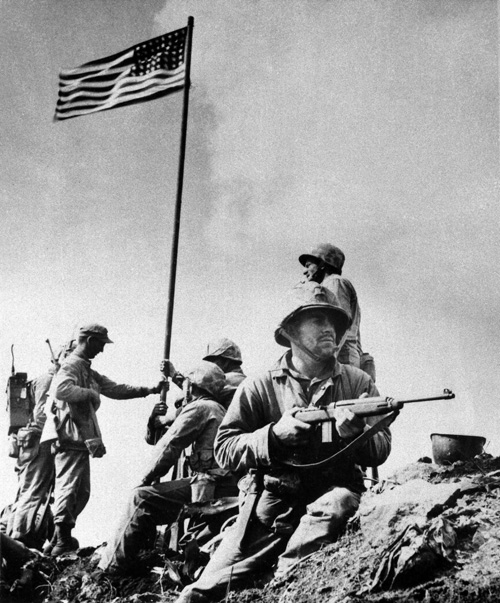 
The Secretary of the Navy, James Forestal, had decided the night before that he wanted to go ashore at Iwo Jima and watch the final stages of the fighting. His boat came ashore just as the flag was being raised and, in the fervour of the moment, said that he would like to have the flag as a souvenir.  When the 2nd Battalion Commander Chandler Johnston heard of it, he commented “The hell with that.”  As far as he was concerned the flag belonged to the battalion.  He ordered Lieutenant Ted Tuttle to get a replacement flag and added “And make it a bigger one.”


Tuttle did find a flag, a bigger flag, and gave it to Johnston, who in turn gave it to PFC Gagnon to take up the mountain and have it raised.  That morning a telephone wire had been run up Mount Suribachi by Sergeant Michael Strank, Corporal Harlon H. Block, Private First Class Franklin R. Sousley and Private First Class Ira H. Hayes.  Now a patrol went up as well to raise the second flag.  Also with them were Associated Press photographer Joe Rosenthal and Marine photographers Bob Campbell and Bill Genaust (who was killed in action nine days after the flag raising).  Whilst thinking of turning back, the photographers met Lowery, who had photographed the earlier flag raising, who told them that it was worth pressing on for the quality photos available from the summit.


The photographic party reached the summit as the Marines were attaching the flag to an old Japanese water pipe.  Rosenthal put down his camera and sought to pile rocks to stand on to increase his vantage point when the Marines began to raise the flag.  He quickly raised his camera and snapped a photo without using the viewfinder.  Ten years later he wrote “Out of the corner of my eye, I had seen the men start the flag up. I swung my camera and shot the scene. That is how the picture was taken, and when you take a picture like that, you don't come away saying you got a great shot. You don't know.”


To view Bill Genaust’s film of the flag raising from approximately the same vantage point, click on:
http://www.youtube.com/watch?v=M8DwC_CQ9fg

After the photograph was taken:


Of the six men pictured - Michael Strank, Rene Gagnon, Ira Hayes, Franklin Sousley, John Bradley and Harlon Block - only three (Hayes, Gagnon, and Bradley) survived the battle. Strank was killed six days after the flag raising when a shell, likely fired from an offshore American destroyer, tore his heart out; Block was killed by a mortar a few hours after Strank; Sousley — the last of the flag-raisers to succumb in the battle — was shot and killed by a sniper on March 21, a few days before the island was declared secure.


The flag raising photo was quickly distributed by AP and widely published in American newspapers.


Following the flag raising shot, Rosenthal had had the Marines present line up for a photograph in front of the flag.  This was dubbed “the gung-ho” shot.  A few days later, back in Guam, Rosenthal was asked whether he had posed the shot.  Thinking that the question related to the gung-ho shot, he answered “Sure.”  This resulted in a controversy, with allegations that he had climbed Suribachi after the flag had already been planted, that he had stage managed the photograph and even later that he should be stripped of the Pulitzer.  The fact that Genaust’s film verified Rosenthal’s photograph was ignored.


Rosenthal’s photograph is the only Pulitzer winning photograph taken in the same year as the award.

The photograph has been used as the basis for a statue, the US Marine Corps War Memorial, located at Arlington Cemetery.


Those involved in the first flag raising became resentful when members of the public denied their involvement in a flag raising on Suribachi, being unaware of the prior flag raising.  According to Charles Lindberg, who had participated in the earlier flag raising, he  "was called a liar and everything else. It was terrible."


As regards the three survivors:


Ira Hayes (1923-1955), a native American, was never comfortable with his fame and became an alcoholic.  He died of exposure and alcohol poisoning on January 24, 1955 after a night of drinking, and was buried with full military honours at Arlington National Cemetery.


Rene Gagnon (1925-1979) also became bitter and an alcoholic. He worked at menial jobs, but was fired from most of them, the last one on Memorial Day, 1978. ]He died in October the next year at age 54, of a heart attack.
John Bradley (1923-1994) never spoke of his war involvement, not even to his family, except for a discussion with his wife on their first date and once in 1985 in an interview at the urging of his wife for the sake of their grandchildren.  Following his death, his son, James Bradley, interviewed all the families of the flag raisers to know his father’s history.  His investigations became a book, Flags of Our Fathers, which was later filmed with Clint Eastwood as director.  His son believes that Bradley, a corpsman at the time of the flag raising, was traumatised by his best friend, Ralph Ignatowski, having been dragged into a Japanese bunker and having been horribly mutilated and tortured.  Bradley was obliged to deal with his remains, images and events which haunted him to his death, and suffered from post-traumatic stress disorder for many years afterwards.