This item started off as a quotes item (the quotes appear later in this post) but, like Topsy, it just growed.  It is therefore rebirthed as 5 Minutes of History.  Hopefully you will find it entertaining.

Yesterday Kate and I watched 6 Days on iTunes (it skipped a cinema release), the 2017 British-New Zealand biographical action film that is a dramatisation of the 1980 Iranian Embassy siege in London. If you’re expecting an action film, this won’t be your cup of tea; if you want the background story and historical aspect, you will probably enjoy it.

My purpose in telling you of this is to post two quotes, neither of which comes from the movie. I should mention at this point that quotes posted by me do not necessarily reflect my opinions, they are selected on the basis of interest.

When Kate and I were looking at the list of new release films on iTunes, we saw the listing for 6 Days, which touched off a discussion about those events.

For those too young to remember, in 1980 a group of six armed men stormed the Iranian embassy in South Kensington, London. The gunmen, members of an Iranian Arab group campaigning for Arab national sovereignty in the southern Iranian region of Khuzestan Province, took 26 people hostage, mostly embassy staff, but also several British visitors as well as an English police officer who had been guarding the embassy. They demanded the release of Arab prisoners from prisons in Khuzestan and their own safe passage out of the United Kingdom. Prime Minister Margaret Thatcher stuck by her policy of refusing to negotiate with terrorists and a siege ensued. Over the following days, police negotiators secured the release of five hostages in exchange for minor concessions, such as the broadcasting of the hostage-takers' demands on British television. On the sixth day the gunmen, increasingly frustrated at the lack of progress in meeting their demands, killed one of the hostages and threw his body out of the embassy. As a result, the government ordered the Special Air Service (SAS), a special forces regiment of the British Army, to conduct an assault—Operation Nimrod—to rescue the remaining hostages. Shortly afterwards, SAS soldiers abseiled from the roof of the building and forced entry through the windows. During the 17-minute raid, they rescued all but one of the remaining hostages, and killed five of the six hostage-takers. The SAS raid was broadcast live at peak time on a bank holiday Monday evening and was viewed by millions of people, mostly in the UK, making it a defining moment in British history. 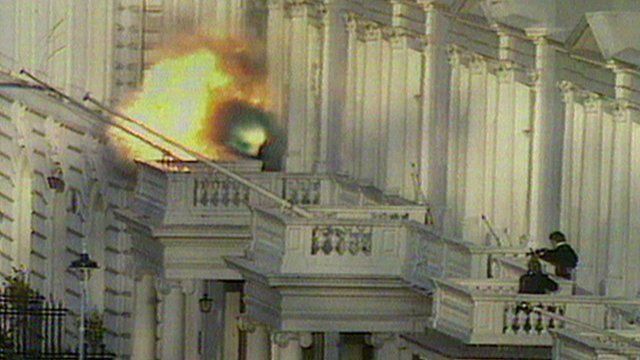 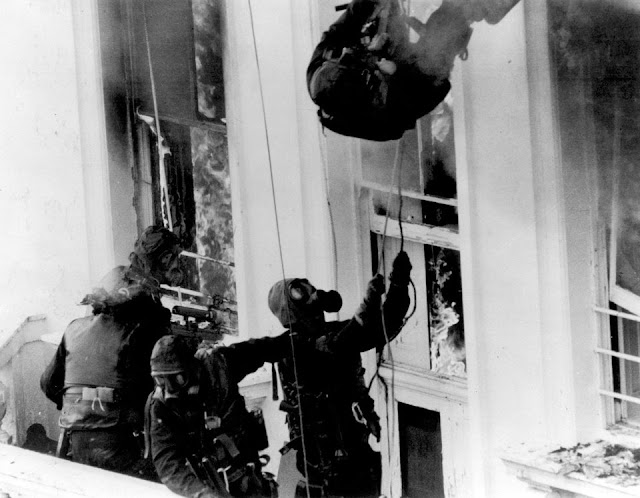 An SAS trooper had become tangled in his abseiling gear and was hanging halfway down the wall. Stun grenades that had been lobbed in through smashed windows below him had set curtains alight and the flames were burning him.  His colleagues managed to cut him free.

Before watching the film, Kate and I watched a doco on youTube where the actual participants spoke about those events. There is a link below to a shorter version.

Following the successful raid on the embassy, the SAS retired to Regents Park Barracks for a debrief and a beer. A TV is on nearby. According to John McAleese, one of the SAS leaders of the raid:

“Then Maggie (Prime Minister Margaret Thatcher) just appeared. Maggie, her husband and one of the bosses. . . suddenly it’s going through the start of it on the telly, a newsflash thing, you know . . . I see me, I’m trying to watch this and there’s this head right in front of me, I’m a short arse, and I think ‘Oh, fuck that’, I didn’t know whose head it was, it was Maggie, and I said ‘Move your fucking head!’, I did, I actually swore, you know, and she . . (mimics her turning around and moving her head to the side) . . . said ‘Oops, sorry’, and she just moved, didn’t bat an eyelid. She just moved and she was actually sitting there and watching it as well." 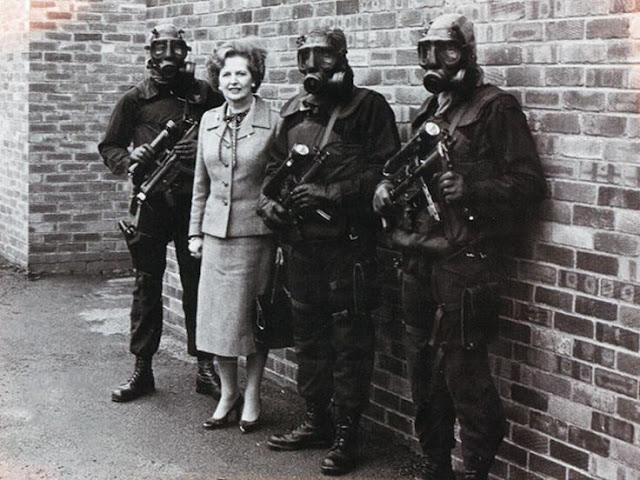 Margaret Thatcher and three SAS personnel after the six-day Iranian Embassy siege in London, May 1980

"He had a big grin on his face and said, 'You let one of the bastards live.' We failed in that respect."
“Tom", one of the SAS soldiers present at the above meeting at the Regents Park Barracks, commenting on what was said to him by Denis Thatcher, husband of the PM. 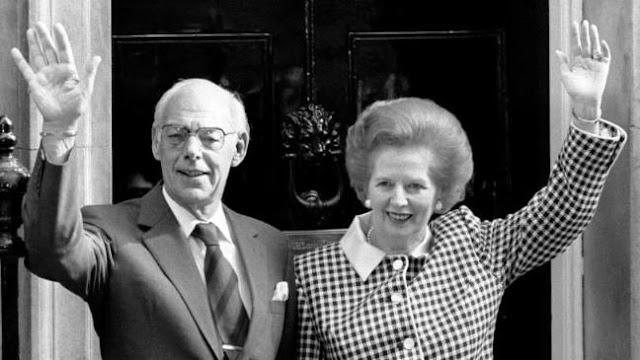 Source:
https://www.standard.co.uk/news/london/terrorist-jailed-for-iranian-embassy-siege-found-living-on-benefits-in-peckham-a3527996.html
Some have said that the allegations were false and that he did not own a computer. 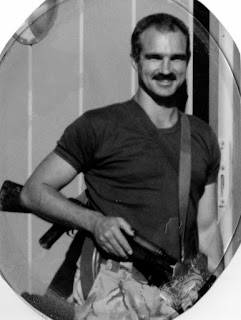 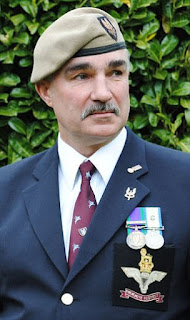 Robin Horsfall, pictured above as a young man and now with his medals