From the Vault: National Icons - Uncle Sam and Columbia

The following item is a repost from February 1, 2014.  It has an obvious relevance to events elsewhere. 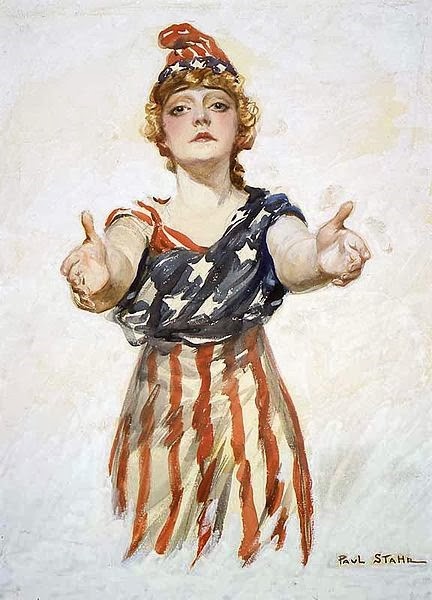 World war 1 patriotic poster depicting Columbia
The earliest personification of the US was not Uncle Sam but a female, Columbia, in 1738 from the weekly publication of the debates of the British Parliament in Edward Cave’s Gentleman’s Magazine. Publication of Parliamentary debates was technically illegal, so the debates were issued under the thin disguise of Reports of the Debates of the Senate of Lilliput, and fictitious names were used for most individuals and place names. The US was recorded as Columbia, harking to its discoverer Columbus.
By the time of the Revolution, the name Columbia had lost the comic overtone of its "Lilliputian" origins and had become established as an alternative, or poetic name. for America. With independence, the name was given to places, ships, institutions and the like. It also reflected a growing interest in American neoclassicism, as exemplified in the tendency to use Roman terms and symbols. The selection of the eagle as the national bird, the use of the term Senate to describe the upper house of Congress, and the naming of Capitol Hill and the Capitol building were all conscious evocations of Roman precedents. 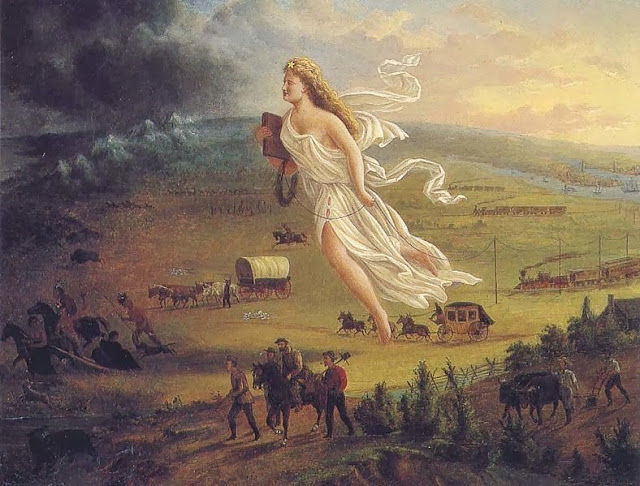 1872 painting, American Progress,by John Gast. Columbia, in the implementation of Manifest Destiny (the American belief that settlement was destined to expand across the continent) leads civilisation westward.
After the World Wars, the personification of Columbia fell out of use, and she has largely been replaced by Lady Liberty as a feminine allegory of the United States.
The image of the personified Columbia was never fixed, but she was most often presented as a woman between youth and middle age, wearing classically draped garments decorated with the stars and stripes; a popular version gave her a red-and-white striped dress and a blue blouse, shawl, or sash spangled with white stars. Her headdress varied; sometimes it included feathers reminiscent of a Native American headdress, sometimes it was a laurel wreath, but most often it was a cap of liberty. 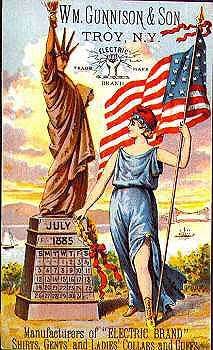 It is noteworthy that when Columbia Pictures adopted Columbia as its logo in 1924, she was (and still is) depicted as bearing a torch – similar to the Statue of Liberty, and unlike 19th Century depictions of Columbia. 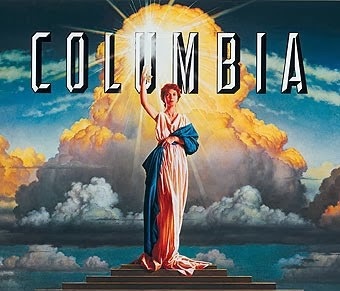 Columbia Pictures logo
Is it just me who thinks that the cloud formation behind her looks like a developing nuclear mushroom cloud?

Brother Jonathan in striped pants, sombre overcoat, and Lincolnesque stove-pipe hat, as drawn by Thomas Nast (above).
The term dates from the 17th century when it was applied to Puritan roundheads during the English Civil War. It also came to be applied to the residents of colonial New England, who were mostly Puritans.
The character was adopted by citizens of New England from 1783 to 1815, when Brother Jonathan became a nickname for any Yankee sailor, similar to the way that GI is used to describe members of the U.S. Army.
From 1812 the personification Uncle Sam became increasingly popular, eventually becoming the dominant image. 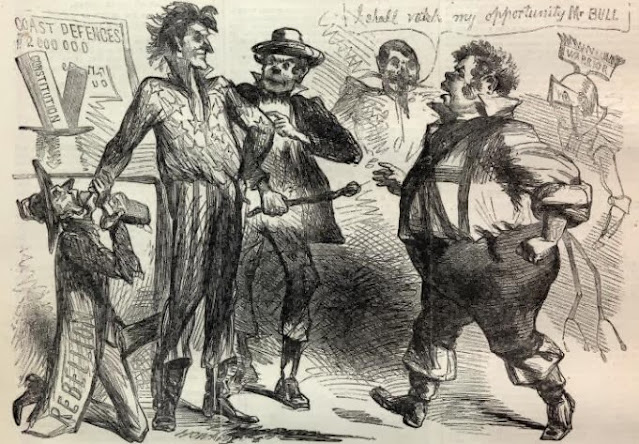 Uncle Sam:
The term Uncle Sam is reputedly derived from one Samuel Wilson, a meat packer from Troy, New York, who supplied rations for the soldiers. There was a requirement at the time for contractors to stamp onto the food they were sending their name and where the rations came from. Wilson's packages were labelled “E.A – US.” When someone asked what that stood for, a coworker joked and said “Elbert Anderson (the contractor) and Uncle Sam,” referring to Sam Wilson, though it actually stood for United States.
As early as 1835 Brother Jonathan made a reference to Uncle Sam, implying that they symbolized different things: Brother Jonathan was the country itself while Uncle Sam was the government and its power.
By the 1850s the name Brother Jonathan and Uncle Sam were being used nearly interchangeably to the point that images of what had been called "Brother Jonathan" were now being called Uncle Sam. Appearance of both personifications varied wildly. For example, one depiction of Uncle Sam in 1860 depicted him looking like Benjamin Franklin, (an appearance echoed in Harper's Weekly's June 3, 1865 "Checkmate" political cartoon). 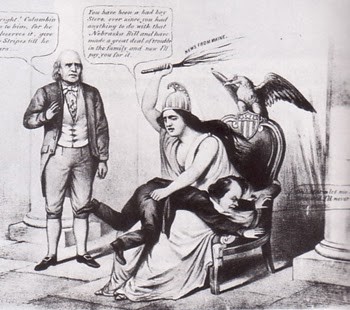 Political cartoon from 1860 depicting Steven A Douglas receiving a spanking from Columbia as Uncle Sam looks on approvingly.
In contrast, the depiction of Brother Jonathan on page 32 of the January 11, 1862 edition Harper's Weekly looks more like the modern version of Uncle Sam (except for the lack of a goatee).
However, even with the abandonment of Brother Jonathan (having evolved into "Johnny Reb") near the end of the Civil War, Uncle Sam didn't get a standard appearance until the well-known "recruitment" image created by James Montgomery Flagg (inspired by a British recruitment poster showing Lord Kitchener in a similar pose). It was this image more than any other that set the appearance of Uncle Sam as the elderly man with white hair and a goatee wearing a white top hat with white stars on a blue band, and red and white striped trousers. 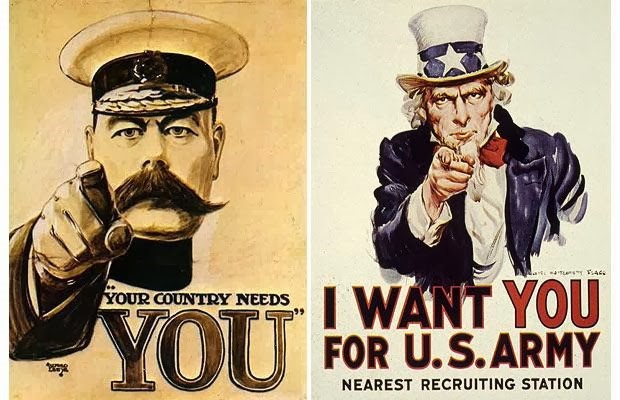 The artwork has an eerie effect that no matter where the viewer is standing, Uncle Sam’s eyes appear to look directly at the viewer.
The Flagg poster and image were also extensively used during World War 2. 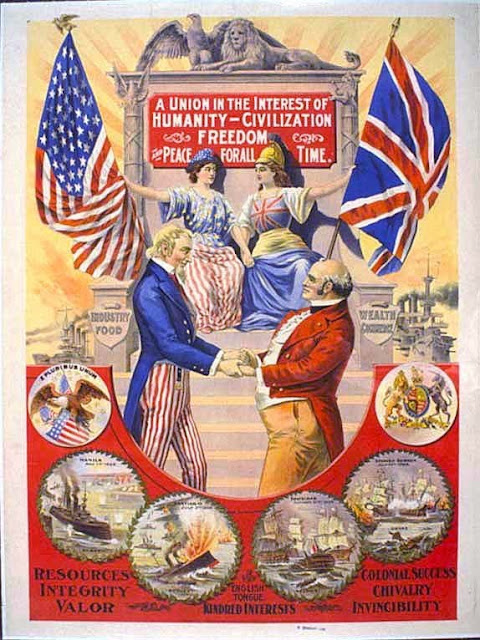 1898 poster supporting gay marriage. Nahh, I made that up.
It is an 1898 poster titled "A union in the interest of humanity - civilization - freedom and peace for all time" and shows the personifications of America (Columbia and Uncle Sam) and Great Britain (Britannia and John Bull) holding hands in friendship, with vignettes of naval battles. The poster cites such reasons for "kindred interests" as: English tongue, resources, integrity, valour, colonial success, chivalry, and invincibility.

Uncle Sam and Columbia, even Liberty, have given way to more modern personifications of America: 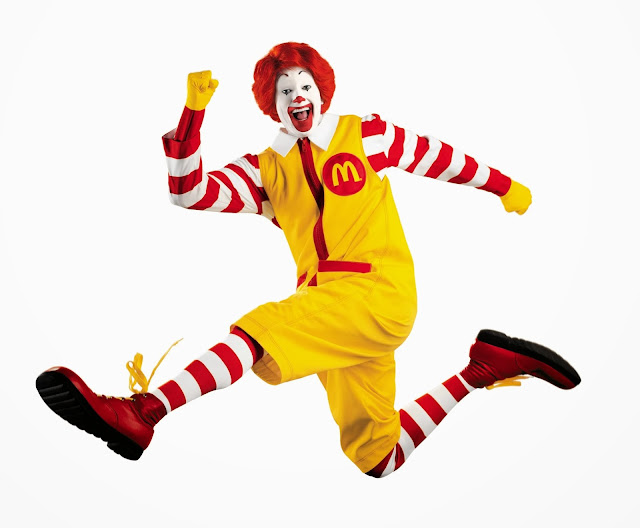 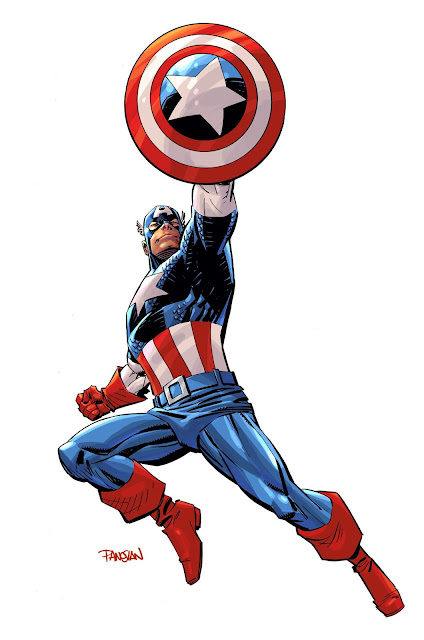 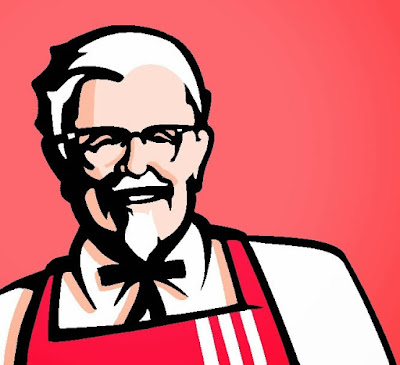 Posted by BytesMaster at 1:08 AM