The Slag Heaps of Loos-en-Gohelle
In the commune of Loos-en-Gohelle, a former mining town in the Nord-Pas-de-Calais region of France, are a series of five conical hills, of which two reaches 146 meters in height. These are slag heaps, the residue of 130 years of mining in the rich coal seam underneath Loos-en-Gohelle that extends west to east just below the Belgian border. The twin peaks, locally known as "terrils" and commonly dubbed the "11-19" — the figures refer to the number of the mine pits — are the highest slag heaps in Europe, and can been seen from miles around.
The terrils are familiar to anyone who has travelled on the motorway or Eurostar train between London and Calais or Brussels. These massive black pyramids dot the entire landscape. There are over 350 such terrils in the Nord-Pas-de-Calais region, but no one is sure of the exact number because some have been exploited for road-ballast, some have been leveled, and others have gradually been taken over by trees and vegetation and are hard to spot. Most are small and irregularly shaped, but the pair at Loos-en-Gohelle are exceptional. They are also one of the last pits in operation, before the coal industry went out of business in 1986.
Nature is slowly transforming these barren heaps of soil into fertile grounds. The 11-19 are now home to more than 200 species of plants, 82 species of birds, two species of amphibians and reptiles, twelve species of mammals, nine species of dragonflies and 53 species of butterflies. The surprising biodiversity has been exploited by the local people in various ways. In the village of Rieulay, a local businessman takes his flock of 40 goats up the terril to graze upon the abundant brush. In another terril, a few miles to the west, another businessman grows vines to make wine.
Some of the terrils, including the 11/19, are now on the UNESCO world heritage list.
Gallery: 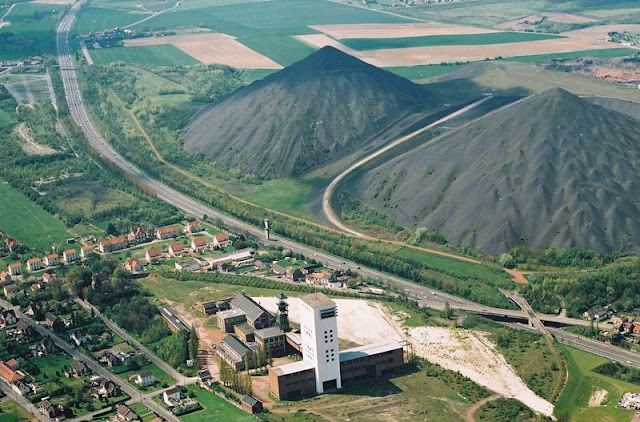 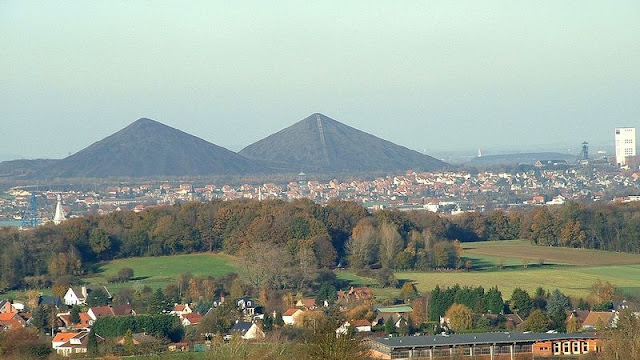 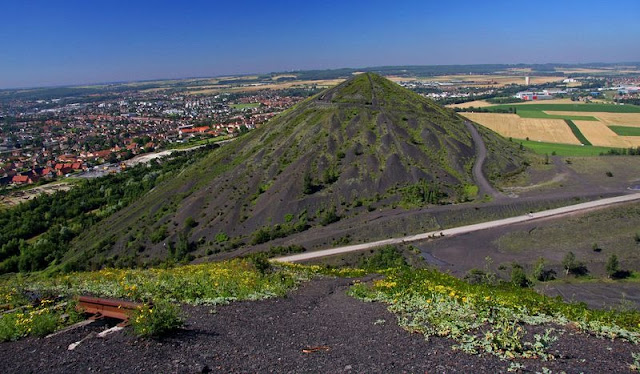 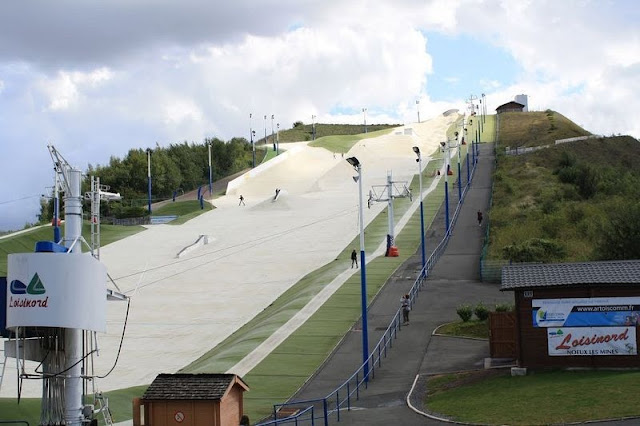 This terril in Noeux-les-Mines has been converted into an artificial ski slope
Source:
https://www.amusingplanet.com/2015/08/the-slag-heaps-of-loos-en-gohelle.html

Aberfan:
Those who have watched Season 3 of The Crown will be at least partly aware of the 1966 tragedy of Aberfan.
In 1966 a mountainous tip of slag located on a mountain slope above the Welsh village of Aberfan slid downhill as a slurry, killing 116 children at a school in its path, and 28 adults. The tip overlaid a natural spring which, with a period of heavy rain, led to a build-up of water within the tip which caused it to suddenly slide. There were 9 tips in all and Tip 7 was the one which slid. The remaining tips were removed only after a lengthy fight by Aberfan residents, against resistance from the National Coal Board (NCB) and the government on the grounds of cost. An official inquiry placed the blame squarely on the NCB but neither the NCB nor any of its employees was prosecuted and the organisation was not fined.
Gallery: 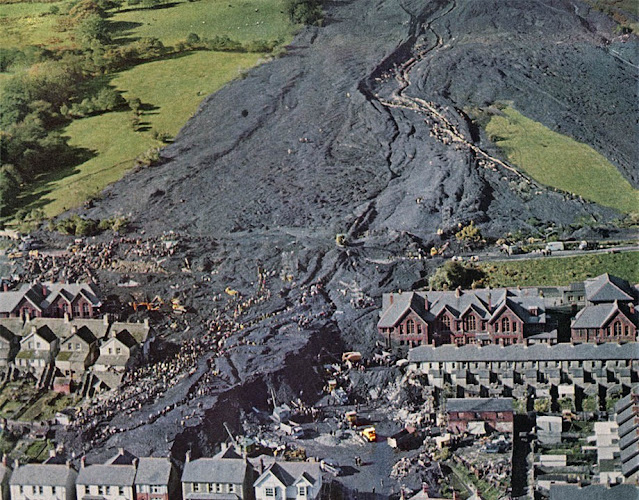 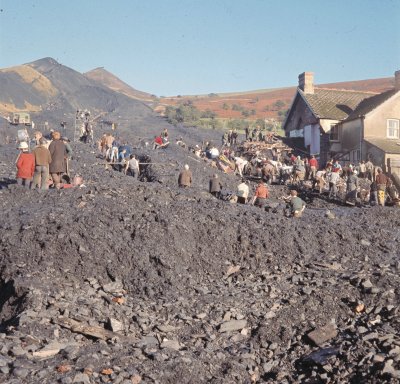 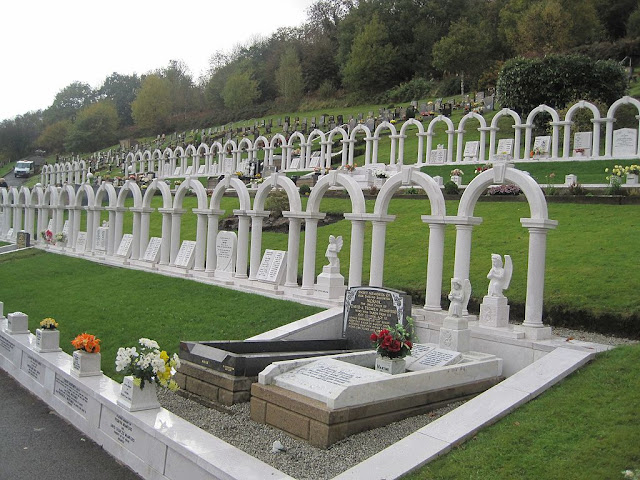 The white arches in Bryntaf Cemetery, Aberfan, which mark the graves of children killed in the disaster.

The people who make The Crown said that the re-enactment of the Aberfan tragedy was traumatic, and was treated with dignity and reverence.
The following is an extract from an article about the disaster and the filming of it for The Crown:

Those relatives and neighbours who took up an invitation from the producers to appear as extras in some scenes were also offered counselling for the first time in 53 years. And there will be more to come.

“We had a therapist to help all the people who were recreating such a horrific scene,” said producer Oona O Beirn. “People who live there are still traumatised, of course, and we found they’d never been offered help before. Now we are trying to arrange more.” 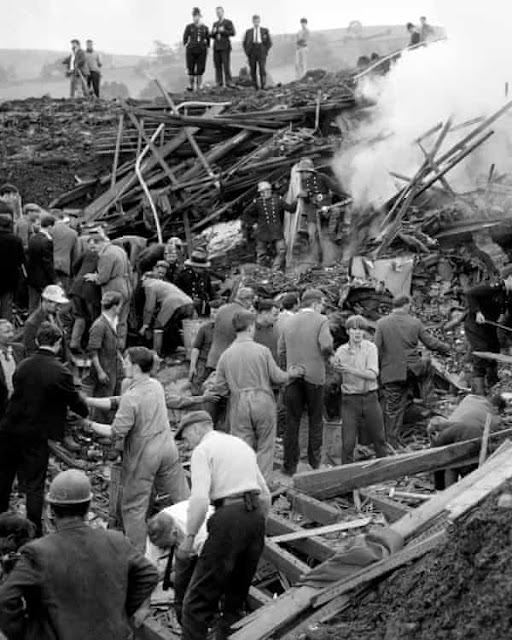 Rescue workers remove mud and rubble burying one of a row of seven houses at Aberfan in 1966.

Before filming began in the nearby village of Cwmaman, the producers also held a well-attended public meeting. “It was a surprise,” said head researcher Annie Sulzberger.

“We had slightly dreaded it, but in fact people wanted to tell their stories and to ask about the new cast,” said O Beirn.

The team also learned of the male voice choir that was formed after the disaster and used them in the episode.

Ahead of the release of the latest series on Netflix, producer Suzanne Mackie said the third episode, dealing with Aberfan, almost stands alone. “Of all the different stories The Crown has done so far, this was most difficult in terms of our duty of care. But it is true to the spirit of all we learned.”

Source:
How filming the agony of Aberfan for The Crown revealed a village still in trauma
The Guardian
https://www.theguardian.com/tv-and-radio/2019/nov/17/television-drama-the-crown-portrays-aberfan-disaster
Posted by BytesMaster at 12:08 AM