FROM THE VAULT: MICHAEL CAINE

Like Queen Elizabeth commenting on Edward de Vere's trouser trumpet during a bow, after 7 years in voluntary exile, I had forgot this post and the anecdotes.  So here it is for another airing, so to speak . . . 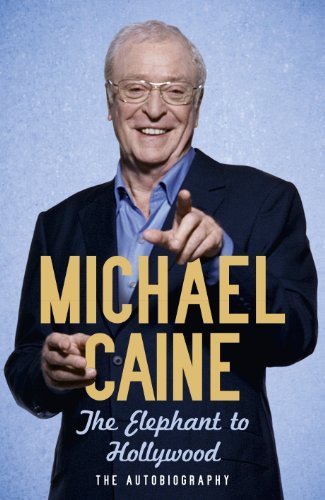 I have previously posted stories about Zulu, one of my favourite pics, and quotes by Michael Caine. In the days when Bytes consisted of an email before becoming a blog, I also posted a piece about the ending of The Italian Job. I will repost that article this weekend.

Michael Caine’s new autobiography, The Elephant to Hollywood, will be released in England on 30 September. I am unaware when it will be available in Oz. It looks like a good read from the section that was published in The Daily Mail on Sunday. Read it at:
http://www.dailymail.co.uk/tvshowbiz/article-1313287/Can-posh-accents-ride-horse--asked-director--Of-course--I-bluffed-How-Michael-Caine-film-star.html
A couple of quick items from that extract:
On Elizabeth Taylor and diamonds:

Many years ago, Richard Burton bought Elizabeth Taylor a diamond necklace for an extraordinary sum.
Several years later I ran into her at a party and she was wearing it. I was telling her how beautiful it was when she pulled me towards her and whispered in my ear: ‘It’s not the real one – it’s paste!’
‘Why don’t you wear the real one?’ I asked. ‘It’s too dangerous,’ she said, looking around her. I followed her gaze: all I could see were multi-millionaires. ‘Surely you’re safe here?’ I said, pointing at the two bodyguards standing behind her chair.
‘Oh – them,’ she said. ‘They’re always here when I’m wearing this.’ I thought for a moment. ‘But surely you don’t need them if the necklace is paste?’
She looked at me pityingly. ‘If I didn’t have the guards, Michael,’ she explained as if to a small child, ‘everyone would know it was paste.’

I knew I wouldn’t get another film until Zulu came out, but I had been given a seven-year contract by Joe Levine, president of Embassy Pictures. When I was summoned to Joe’s office, I bowled along, pretty certain he would hold to his side of the bargain.
Levine was everybody’s idea of a movie producer: short, fat and with a big cigar. He got straight to the point. ‘I said to you, Michael, I said, “Michael, you’ll be dripping with diamonds. Didn’t I?’ I nodded. ‘Well, I still believe that’s gonna happen,’ he paused and I held my breath, ‘just not with Embassy Pictures.’
I breathed out. I had gone dizzy. ‘Didn’t you like me in Zulu?’ I asked. ‘Loved you, Michael,’ Joe said warmly. ‘But there’s one thing I gotta tell you.’ He seemed to be bracing himself. ‘I know you’re not, but you gotta face the fact that you look like a queer on screen.’
I was dumbfounded. Me? Queer? ‘I know you’re not,’ Joe said again hastily, ‘but there’s a lot of queer stars out there who look butch, and that’s fine – but you’re the other way round and it’s the wrong way round.
You’ll never be a romantic lead.’ Fortunately, other people thought differently. After Zulu was released, I was offered The Ipcress File and a seven-year contract with Harry Saltzman, who, with Cubby Broccoli, was responsible for the James Bond movies.

On Harry Palmer and The Ipcress File:

Harry was constantly working, constantly thinking. I’ve always worn glasses. ‘I wear them because I need them,’ I told him, a bit defensively. ‘No,’ he said. ‘It’s good. Let’s have Harry Palmer wear them, too.’
The Ipcress File was highly successful, but it ran into the old problem. After the first rushes, we got a cable from Hollywood. ‘Dump Caine’s spectacles and make the girl cook the meal – he is coming across as a homosexual.’
This is not the exact message – I’ve cleaned it up. We had deliberately gone anti-Bond and as well as the glasses, we’d decided Harry should cook, which was risky stuff in Britain in 1964.
When he seduces the girl, he doesn’t wine and dine her in a restaurant, he takes her home and cooks her dinner – making an omelette by breaking two eggs at once in one hand.
As for the glasses, when the girl (played by Sue Lloyd) asks if I always wear them, I reply: ‘I only take them off in bed,’ and she reaches over and takes them off. It’s now one of the great moments of movie seduction, so I’m glad we stuck to our guns.

On Paramount and The Italian Job:

Paramount gave a lunch for Alfie and I found myself sitting next to an Austrian guy. ‘My name is Charles Blühdorn,’ he said in a thick accent. ‘I liked your movie and your performance very much.’
I thanked him and asked what he did. He said he was an industrialist and added: ‘But you should ask me what I did yesterday.’
‘And what did you do yesterday?’ I asked dutifully. ‘I bought Paramount Studios!’ he said. ‘So, if you ever have a script you want to do, let me look at it.’
‘As a matter of fact . . . ’ I said, ‘there is something . . .’ I told him my friend Troy Kennedy Martin had written a script with a great part for me as a crook called Charlie Croker.
‘What is it called?’ Mr Blühdorn asked. ‘The Italian Job,’ I replied.
You never can know what a chance meeting might bring, can you?