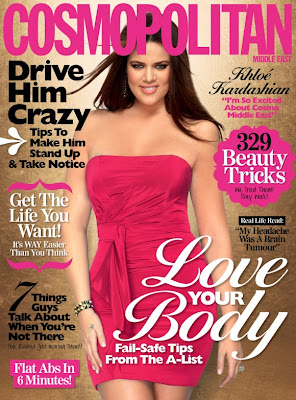 Last night I received an email from my daughter, Acacia (below), who is living in Dubai as art director for the launch of Cosmopolitan Middle East. More of that in a moment.


Don’t ask her whether Cosmo ME  is going to have someone on the front cover in a burqa, she has heard that comment, and variations on it, ad nauseum.
Acacia was previously art director of Cosmopolitan, and later Cleo, in Sydney. What she does as a graphic designer is to turn a page or screen of text into the result that you see in the magazine, with pics, fonts, graphics, pullouts and all those other type of magazine graphic design things.
The reason for my daughter’s excited email was that the first issue of Cosmo ME is now ready to launch on 1 April with her cover of Khloe Kardashian. The cover was leaked by Khloe Kardashian on her website and has now gone global, including stories in The Huffington Post, RadarOnline, X17online and the Examiner. According to Acacia, it’s like having a painting hung in the Louvre.
For those not in the know, the Kardashian Klan are celebrities in the US. The females of the species are the ones who get the attention: Kim, Kourtney, Khloe and their mother Kris. Brother Robert missed out on being a KK, having been named after his father who is also a Robert.
ME Cosmo will not be sold in every ME country but nonetheless it is a bold move for women by women.