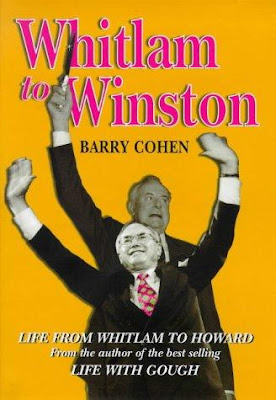 The following story is taken from Barry Cohen’s 1997 book Whitlam to Winston, a collection of anecdotes about Australian politics in the period from PM Gough Whitlam to PM John Winston Howard.  The book is unfortunately now out of print but if you can ever get hold of a copy, it is well worth the read. 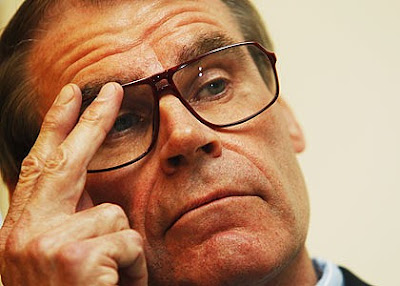 John Faulkner
Multiculturalism
Prior to his elevation to the Senate and later to the Ministry for the Environment in the Keating Government, John Faulkner  was an Assistant Secretary of the NSW branch of the ALP.  One of his tasks was to attend branch meetings to sort out their problems.  He was kept very busy.
One branch in which there were endless brawls between the right and the left factions was the inner-city branch of Golden Grove, in the Newtown area.  The members of this branch were, John says, “typical of the old-style Labor Party branches made up of working-class characters.”  A staunch member of the Party’s left wing, John adds, “While they were usually right wing, I used to love them all.  They were great blokes.”
Arriving one evening at about 7.30 to check the books for pre-selection purposes, he realised that something was amiss.  The meeting was under way, but there were long tables covered in white cloths with seven pronged candelabras placed strategically on the tables.  A sophisticated man, Faulkner quickly realised that this was not your average Australian Labor Party branch meeting.

As he stood at the back of the hall surveying the scene, the curtains on the stage parted and a tall, bearded, patriarchal figure in flowing white robes and a white hat emerged with both hands outstretched.  The members facing the stage looked stunned and talk ceased immediately.  As the usual hubbub died down the branch officers, with their backs to the figure on stage, noticing the sudden quiet, looked up to see their fellow members staring past them, mouths agape..  The President turned around and saw the ghost-like apparition.
“Jesus %X#!ing Christ,” he screamed.
At about this point, for Faulkner at least, the penny dropped.  He suddenly remembered that tomorrow was the most holy of Jewish holy days – Yom Kippur, The Day of Atonement.  It was obvious that the Golden Grove branch meeting had clashed with the evening service held prior to Yom Kippur – Kol Nidre.  Faulkner swears his heart stopped.
The white-robed rabbi was remarkably cool, considering what was happening.  He addressed himself to the Secretary of the branch, whom he obviously knew.  “Alderman Haines,” he intoned in a rich, booming voice, “This is sacrilege.”
At this point a large group of bearded Orthodox Jewish men dressed in frock coats started filing into the hall.  Faulkner, who had started breathing again, decided that intervention was essential.  He spoke to the Chairman:  “Come on, we had better get out of here.”
However, Billy Ebert, a former Alderman of the Sydney City Council, convinced it was all a left-wing plot, had other ideas.  “Not on your life.  We’re not coppin’ any shit from lefties like you.  We paid for this hall.  We’re having our bloody meeting.”  He then proceeded to light his cigarette from the candelabra (menorah).
The rabbi, whose complexion by now matched the rest of his ensemble, could contain himself no longer.  “Sir,” he said, “you don’t light cigarettes from our menorah.”  Even Billy Ebert realised something was wrong.  “Sorry, mate,” he said to the rabbi, and promptly blew the candles out.
Faulkner by now was ready for the intensive care ward.  He had visions of the Labor party making the headlines of the Jewish News.  “We’ve really stuffed it this time,” he thought to himself as he looked at the crowd of more than thirty Orthodox Jews milling around the Labor Party’s finest.
Alderman Haines, to his credit, twigged to the fact that the Labor Party had to pack up and go, and he said so.
Others, however, had different ideas.  One stalwart, convinced it was a left-wing plot to rig the pre-selection, jumped to his feet and shouted at the strange figures:  “You’re not leaving here until you sign the %X#!ing book!!”
Source: John Faulkner