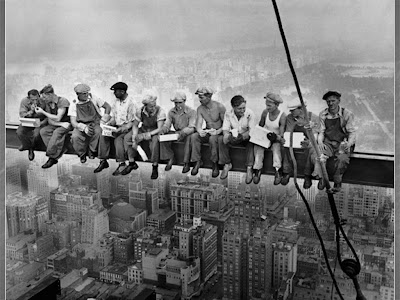 (Click on the images to enlarge)
Remember days gone by when smoking was allowed anywhere, when there were no seatbelts in cars and when asbestos was commonplace?  Not only did the term Occupational Health and Safety not exist, there wasn’t even such a concept.  For yunger readers, this wasn’t as far back as the 1930’s, it was in the 60’s and 70’s.
The above photograph however, entitled New York Construction Workers Lunching on a Crossbeam, was taken in 1932 by Charles C Ebbets during construction of the RCA Building in New York.  Ebbets took the photograph from the 69th floor during the final month of construction.
The photograph depicts 11 men sitting on a girder having lunch, their feet dangling hundreds of metres above the street.  It has become a famous, and an iconic, image of the 20th century.
The photograph is now commonly believed to have been staged by collecting them to sit on the girder, but i is a real photograph of what it shows and the men are real.  There are no safety lines, no nets, no harnesses.
It has been known for people with vertigo to get dizzy viewing the image.
Apart from New York Construction Workers Lunching on a Crossbeam, Ebbets also photographed the men asleep on the girder.  Ebbets called the photograph . . . wait for it . . . Men Asleep On a Girder.  Ebbets may have been a good photographer but he lacked imagination in regard to captioning. 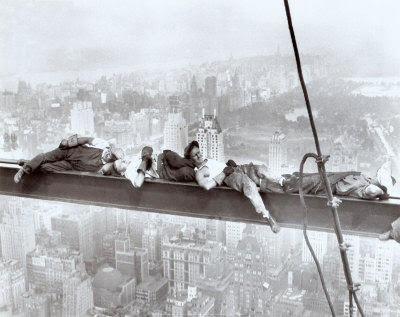 Artist Segio Furnari has sculpted a 3D version of the photograph as a mobile art and advertising display for a foundry, the sculture being mounted on the back of a truck.  For some time it was parked at Ground Zero in homage to the workers there. 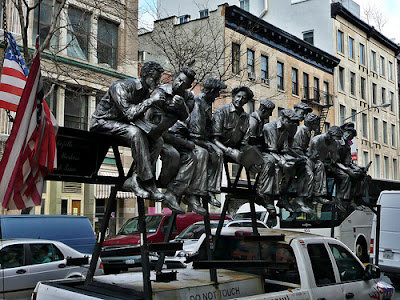 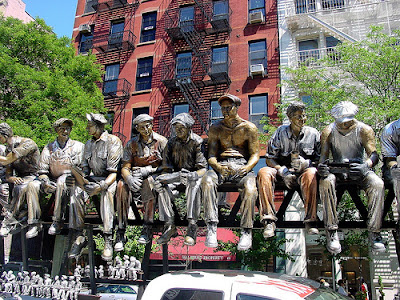 Amateur photographer, Mike Stimpson, has recreated a host of iconic photographs in Lego.  Here is a recreation of Ebbets’ classic: 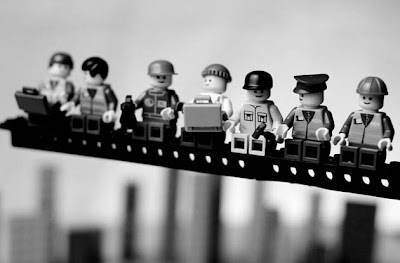 See more at:
http://www.telegraph.co.uk/news/uknews/1583758/Iconic-photographs-recreated-in-Lego.html
One final note:  one reviewer believes that the intent of the lunch on the girder image was to portray the dangers of high rise work, that familiarity (as shown by the men relaxing in such situation) is part of the danger.  He also points out that the worker on the right, holding the bottle and looking separate, unhappy, alienated from the others, depicts the fear associated with such work.
http://sisii2011.blogspot.com/2011/05/lunch-atop-skyscraper-new-york.html