William Archibald Spooner (1844-1930) was an Oxford don who became so entangled in his own words so often that he has given his name to the linguistic foulup of transposing the initial letters of words near each other. A well known example of a spoonerism by someone other than the Speverend Rooner, I mean Reverend Spooner, is the announcer on a TV station talking about the program to follow: "Stay tuned for Charles Dickens’ immortal classic A Sale of Two Titties….er…..A Tale of Two Cities.” Another famous example is the deliberate spoonerism in the lyrics “I’m not the pheasant plucker, I’m the pheasant plucker’s son...”

One does not need to go beyond the words of Spooner himself, however, to find some famn dunny, I mean damn funny, examples. Spooner was not happy about his fame, given that he was renowned for being a dickhead. On one occasion after he had become known for his Spoonerisms he told a large crowd that had gathered to hear him speak "You haven't come for my lecture, you just want to hear one of those...things."

As his fame for spoonerisms spread, many such gaffes were made up by others, especially students, and attributed to him.  He himself admitted to only one, his announcement of the name of a hymn to sing in chapel. Intending to say "Conquering Kings Their Titles Take", he instead blurted out "Kinquering Kongs Their Titles Take". 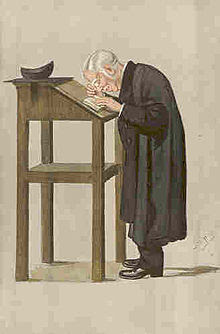 William A Spooner as caricatured in Vanity Fair, 1898

Physically Spooner was somewhat remarkable: an albino with a pink face, poor eyesight and with a large head on a small body. He was intelligent and well liked but had a problem with absent mindedness and with unintentionally mixing up his words and syllables.

Some of Spooner's attributed spoonerisms (some may be apocryphal):

Let us glaze our arses to the queer old Dean"
(...raise our glasses to the dear old queen).
- Toast to Queen Victoria

"The Lord is a shoving leopard"
(Loving shepherd)

"a half-warmed fish"
(A half-formed wish)

"a well-boiled icicle"
(A well-oiled bicycle)

Some other spoonerism items:

An item on the internet from some years ago:

One of my friends is a Jehovah's Witness and he took his little boy to the movies. As they were walking through the packed out cinema, he was mortified to hear his little 3 year old shout out “Dad, have you finished with your cockporn yet?”

However hard he tried he couldn't make his son say 'popcorn'!!

Q: What’s the difference between a war horse and a cart horse?
A: A war horse darts into the fray.

Q: What's the difference between a nun and a woman in a bathtub?
A: The nun has a soul full of hope.

“My favourite character in the Robin Hood saga is not Maid Marian but Friar Tuck, who I always thought was actually a spoonerism... “

Posted by BytesMaster at 4:00 AM