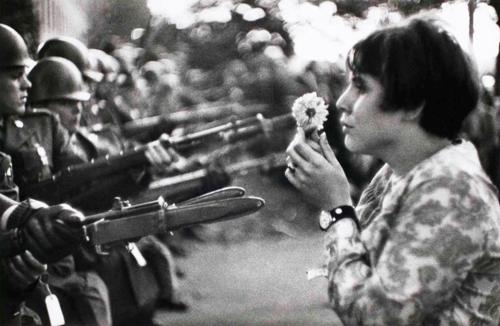 Although the US had sent military advisors to French Indochina from 1950 onwards, US involvement in the war between North and South Vietnam escalated in the early 1960’s. It was the prevailing official view of the US and its allies, including Australia, that containment of communism in Vietnam would prevent its spread to neighbouring countries, the so called Domino Theory. US troop levels tripled in 1961 and tripled again in 1962. US combat units were deployed from 1965 and eventually bombing spread to Laos and Cambodia. The Tet Offensive in 1968 brought the realisation that the public been misinformed by the military and that it was likely that the war was unwinnable. Ground force numbers were reduced with US military involvement ceasing in 1973. In 1975 Saigon fell and the war ended.

Last year my son Thomas spent a few weeks in Vietnam, travelling extensively and visiting various points of interest. One such stop was at the tunnels of Cu Chi in a district of Ho Chi Ming City, now a tourist spot. The Cu Chi tunnels are part of an extensive network of tunnels and were the location of various military campaigns during the Vietnam War. It was also the Viet Cong’s base of operations for the Tet Offensive. Serving as places of guerrilla concealment, communication and supply routes, hospitals, food and weapon caches and as living quarters, they are today a war memorial park and popular tourist destination. Where guerrillas once lived, fought and died, tourists now crawl through as sightseers. Some of the tunnels have been widened to accommodate the larger size of Western tourists.

In 1967, with the Tet Offensive not yet having proved a turning point, a demonstration against the war took place outside the Pentagon, Arlington County, Virginia. Included in the crowd of several thousand ant-war activists was 17 year old high school student Jan Rose Kasmir. Between the demonstrators and the Pentagon was a line of armed soldiers holding loaded rifles fitted with bayonets. Kasmir was photographed by French photographer Marc Riboud holding a daisy and gazing at bayonet-wielding soldiers (photograph above).

She was also photographed offering the daisy to the soldiers: 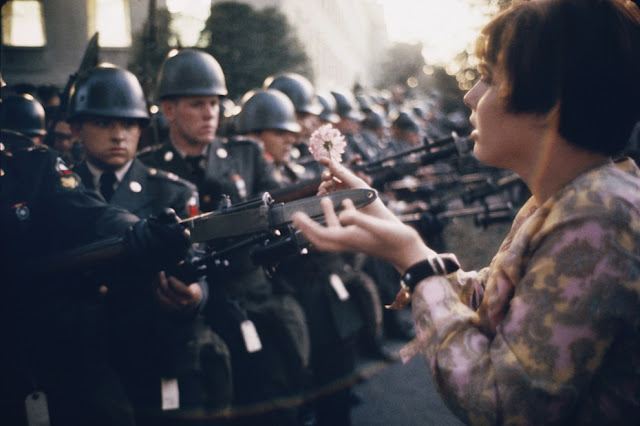 "It was an extraordinary scene. A 17 years old girl saying, ‘You can crush the flower, but we are brothers, we can talk'. She just talked to them, tried to capture the look of the soldiers, trying to talk to them. I felt that the soldiers were more afraid of her than she of the bayonets.”

According to Jan Kasmir:

“It was not a provocation. I just wanted to talk to them about love. They were not machines of war, it was just a group of men obeying orders”.

The photo was published world-wide and became a symbol of the flower power movement. Smithsonian Magazine called the image "a gauzy juxtaposition of armed force and flower child innocence".

(Three years later, in 1970, the Ohio National Guard shot and killed 4 unarmed students, some of whom had been demonstrating against the bombing of Cambodia and some who were innocently walking past.  9 were injured, one with permanent paralysis.  That further added to opposition to the war). 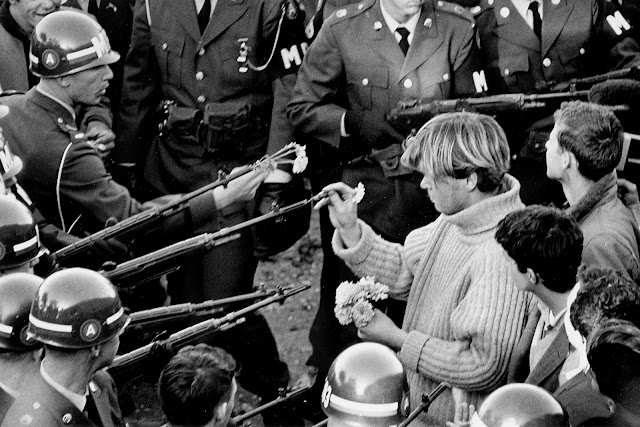 Boston photographed 18 year old actor George Harris placing carnations into the rifle barrels of military policemen. He was an actor on his way to San Francisco from New York.  When Harris eventually did arrive in San Francisco he came out as gay, took the name Hibiscus and was a co-founder of a flamboyant, psychedelic, gay-themed troupe called the Cockettes. Harris died of complications from AIDS in the early 1980’s at the start of the epidemic. According to one writer, “Boston's iconic photo, so emblematic of one era, was also secretly a harbinger of another.”

Riboud's and Kasmir's paths crossed again in 2003 when he photographed her taking part in a demonstration in London against the war in Iraq. She was holding a copy of the 1967 photograph: By way of contrast, skip ahead to 2007, to a photograph of Captain Terri Gurrola greeting her daughter Gabrielle Gurrola, 3, at the Atlanta Hartsfield-Jackson International Airport in Atlanta on September 11, 2007, after returning from a seven month tour in Iraq: 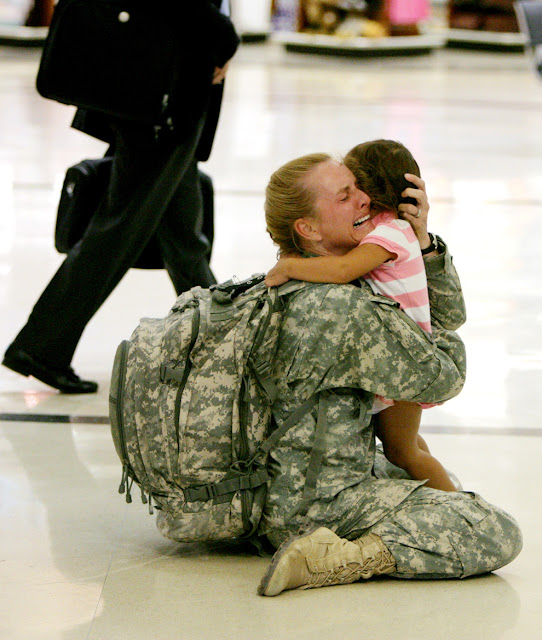