Friend Graham E sent me an email about some interesting some titles. Thanks Graham.
Here is his email:

Hi Mr O,
Hers something I found doing a quiz. I came across some songs from WW I, with great titles.
Thought they may be useful or lead to a great byte about risqué song titles! 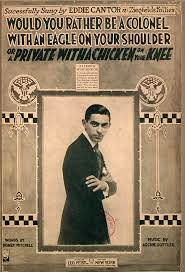 "Would You Rather Be a Colonel with an Eagle on Your Shoulder or a Private with a Chicken On Your Knee?"
A World War I song that became a hit for songwriter and performer Arthur Fields in 1919. His version was recorded for Columbia records.
The song uses the colloquial in comparing a "bird" colonel's life to that of a private.
It also expresses a common man theme that was popular with Tin Pan Alley songwriters during World War I. The song was mentioned in detail in the address of E. M. Allen, who was president of the National Association of Insurance Agents, at the Annual Meeting of the Fire Underwriters' Association of the Northwest that was held in Chicago in 1918. The song is mentioned in Preston Jones' The Oldest Living Graduate: A Play in Two Acts. 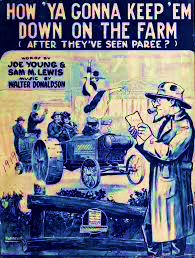 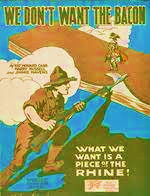 “We Don't Want the Bacon (What We Want is a Piece of the Rhine)”
A World War I era song released in 1918.  Lyrics and music were written by "Kid" Howard Carr, Harry Russell, and Jimmie Havens.  On the cover is a soldier tearing through a large piece of bacon with his bayonet.  A fearful-looking Kaiser Wilhelm is standing on the bacon.
The song's title is influenced by the popular saying, "bringing home the bacon."  his phrase means to be successful, specifically financially successful. 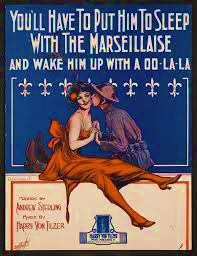 “You'll Have to Put Him to Sleep with the Marseillaise and Wake Him Up with a Oo-La-La”
A World War I song written in 1918. Andrew B. Sterling wrote the lyrics, and Harry Von Tilzer composed the music. The song was produced by the Harry Von Tizler Publishing Company in New York City.
On the cover of the sheet music is a soldier kissing a woman.
The lyrics relay the message to American girls that US soldiers have learned "a lot of things in France," and in order to keep men interested they should adopt French mannerisms and learn how to speak French. 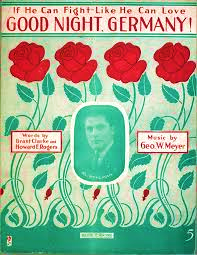 “If He Can Fight Like He Can Love, Good Night Germany!”
A World War I song from the perspective of a woman confident that her boyfriend will be a good soldier because he was a good lover. It became a hit after it was released by The Farber Sisters in 1918.
--------o😊o--------
Not necessarily risqué, here are some other amusing song titles, Graham . . .
"You're the Reason Our Kids Are So Ugly"
Loretta Lynn and Conway Twitty
"We Hate It When Our Friends Become Successful"
Morrissey
"Thank God And Greyhound (She's Gone)"
Roy Clark
"If You Don't Believe I Love You, Just Ask My Wife"
Gary P. Nunn
"You Take the Medicine (I'll Take the Nurse)"
William Penix
"I Wouldn't Take Her to a Dog Fight"
Charlie Walker
“She Never Told Me She Was a Mime"
Weird Al Yankovic
"Satan Gave Me a Taco"
Beck
"I've Been Flushed From the Bathroom of Your Heart"
Johnny Cash
"All I Want From You (Is Away)"
Loretta Lynn
"You Can't Have Your Kate and Edith Too"
The Statler Brothers.
"If the Phone Doesn't Ring, It's Me"
Jimmy Buffett
"Drop Kick Me, Jesus (Through the Goal Post of Life)"
Bobby Bare
"Our Lawyer Made Us Change The Name Of This Song So We Wouldn't Get Sued"
Fall Out Boy
"If My Nose Was Running Money (I'd Blow It All On You)"
Aaron Wilburn and Mike Snider.
"I've Got Tears in My Ears From Lying on My Back in Bed While I Cry Over You"
Homer & Jethro
"How Could You Believe Me When I Said I Loved You When You Know I've Been A Liar All My Life"
Fred Astaire Jane Powell
"I'd Rather Have a Bottle in Front of Me (Than a Frontal Lobotomy)"
Dr. Randy Hanzlick (an actual doctor) wrote this song
"I Don't Know Whether to Kill Myself or Go Bowling"
Instant Witness
"Billy Broke My Heart at Walgreens (I Cried All the Way to Sears)"
Ruby Wright
“Thanks for the Killer Game of Crisco Twister"
Minus the Bear
"Please, Daddy, Don't Get Drunk This Christmas"
John Denver (the song's title is only funny to the extent that it shows just how far country musicians are willing to go to write something sad).
"You Can Make Me Dance, Sing, or Anything …Even Take the Dog for a Walk, Mend a Fuse, Fold Away the Ironing Board, Or Other Domestic Shortcomings"
Rod Stewart and the Faces
"If You Can't Live Without Me, Why Aren't You Dead Yet?"
Mayday Parade
"Here's a Quarter (Call Someone Who Cares)"
Travis Tritt
"I Bought the Shoes That Just Walked Out on Me"
Wynn Stewart
"She Got the Gold Mine, and I Got the Shaft"
Jerry Reed
"Shoop Shoop Diddy Wop Cumma Cumma Wang Dang"
Monte Video and the Cassettes
"Mmm mmm mmm mmm"
Crash Test Dummies
"Put Your Big Toe in the Milk of Human Kindness"
Elvis Costello
"Nothing's Gonna Change My Clothes"
They Might Be Giants
"Too Much Month at the End of the Money"
Billy Hall
"My Uncle Used to Love Me, But She Died"
Roger Miller
"I Wanna Find a Woman That'll Hold My Big Toe Till I Have to Go"
Captain Beefheart and the Magic Band
"Thank You (Falettinme Be Mice Elf Agin)"
Sly and the Family Stone
"This Song Has No Title"
Elton John?
"Thanks to the Cathouse (I'm in the Doghouse With You)"
Johnny Paycheck
"What Made Milwaukee Famous (Has Made a Loser Out of Me)"
Jerry Lee Lewis
"If You Won't Leave Me, I'll Find Somebody Who Will"
Warren Zevon
“If I Said You Had a Beautiful Body (Would You Hold It Against Me?)”
Bellamy Brothers