Edward De Lacy Evans (born Ellen Tremayne or Tremaye, 1830? – 25 August 1901) was a servant, blacksmith and gold miner, who immigrated from Ireland to Australia in 1856, and made international news in 1879 when it was revealed he was born a woman. 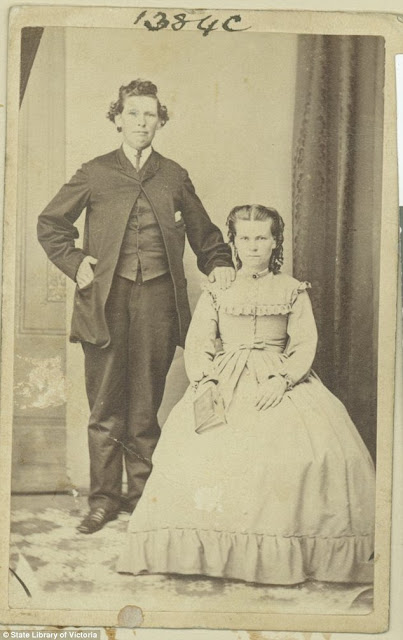 Edward De Lacy Evans (left) pictured with third wife Julia Marquand (right). Evans registered himself as the father of Ms Marquand's child shortly before being admitted to hospital for depression in 1879

Not much is known of Evans’ early life.  He told miners he worked with in Australia that he was born in France, had stolen £500 as a boy and fled to Waterford, where he acquired his Irish accent.

In 1856, Evans arrived in Victoria, Australia, then in a goldrush 'boom' period. Evans traveled under the name Ellen Tremayne and, in the information he provided, stated that he was aged 26, born in Kilkenny, was a Roman Catholic, a housemaid and could read and write.  For most of the voyage to Australia, Evans wore the same outfit of coat reaching almost to her ankles with men's shirt and trousers.  Evans was said to have a traveling trunk full of male attire, stamped with the name 'Edward De Lacy Evans'. This, and the fact he appeared to have 'formed sexual attachments' with some of the women he shared a cabin with, led to on-board speculation he was a man impersonating a woman, rather than the other way around.

After arrival, Evans found one of his fellow passengers from the voyage, Mary Delahunty, a 34-year-old governess from Harristown, Waterford, in a similar area of Ireland to Evans, one of the 'close attachments' he had made on the voyage.  With Evans wearing male clothes and calling himself 'Edmund De Lacy', Evans married Delahunty in a Roman Catholic ceremony.

Little is known of Evans and Delahunty's married life over the next few years but there were reports that they 'did not live comfortably together'. Evans moved to work as a miner in the state's north-west, and Delahunty followed him in 1858. Delahunty established a school in Blackwood but in 1862 left to marry Lyman Oatman Hart, an American mining surveyor.  Delahunty told 'all who objected to this blatant act of bigamy' that her first marriage was not legal as Evans was a woman.   Delahunty and Hart moved to Daylesford where they lived through the 1860s and 1870s.

Evans also left Blackwood in 1862, moving to Sandhurst (now Bendigo), and, describing himself as a widower.  Evans then married a 23-year-old Irishwoman, Sarah Moore.  Over the next five years he held various occupations including carter, miner, blacksmith and ploughman and lived with Moore in several nearby towns.

In 1867, Moore died of pulmonary tuberculosis and the following year Evans met, and married, a friend of his former wife's sister, 25-year-old Julia Marquand.  Marquand was a French dressmaker's assistant who lived with her sister and brother-in-law.

In the early years of their marriage Evans and Marquand often lived apart but the couple reconciled by 1872.  In 1877, Marquand gave birth to a daughter the couple called 'Julia Mary'.  Evans later supported Marquand when she brought a child maintenance suit against her brother-in-law Jean Baptiste Loridan for the child but he gave his name as father on the birth certificate. Around this period Evans' was injured at work and, while he 'welcomed the child as his own' he was also disturbed by the circumstances in which his wife became pregnant.

In 1879 Evans was involuntarily committed to 'the lunatic wards' of the Bendigo hospital.  For six weeks at the Bendigo Hospital Evans refused to take a bath.

The events at the Kew Asylum were described in The Argus newspaper on 3 September 1879:

"A curious incident has occurred at Kew Lunatic Asylum. A lunatic was brought from Sandhurst by the police, and was admitted into one of the male wards. The patient was tolerably quiet until preparations were made for giving 'him' the usual bath. On the attendants attempting to carry out the programme, violent resistance was made, the reason for which proved to be that the supposed man was in reality a woman. The most singular part of the affair is that the woman had been received into Sandhurst Hospital as a male patient and sent thence to the asylum under the name of Evans. She states that she has lived at Sandhurst for many years dressed in male attire. Her age is about 35."

On 4 September 1879, the Bendigo Advertiser ran with the headline 'Extraordinary Case Of Concealment Of Sex' and wrote:

"One of the most unparalleled impostures has been brought to light during the past few days, which it has ever been the province of the press of these colonies to chronicle, and we might even add is unprecedented in the annals of the whole world. A woman, under the name of Edward De Lacy Evans, has for 20 years passed for a man in various parts of the colony of Victoria... As it is almost impossible to give an account of the case without making use of the masculine pronoun when referring to Evans, we propose to use that appellation... "

It was soon reported by local newspapers, and then the 'colonial and international press', that Evans had been determined by the Kew Asylum to be a woman, and 'promptly handed over to female nurses' and sent back in Bendigo. Evans later recalled:

"The fellers there took hold o' me to give me a bath, an' they stripped me to put me in the water, an' then they saw the mistake. One feller ran off as if he was frightened; the others looked thunderstruck an' couldn't speak. I was handed over to the women, and they dressed me up in frocks and petticoats."

While still a patient at Bendigo, Evans said he knew who the father of his child was, made a reference to his wife not being 'true', and mentioned concerns about financial difficulties and possibly losing the house he had built, before adding, 'Everything coming together was enough to drive a man mad.' Marquand also spoke to the press and insisted she had never known Evans was not a man.

It wasn't only the newspapers that covered the 'curious incident'; Stawell photographer Aaron Flegeltaub began selling copies of the formal portrait Marquand and Evans had taken in the early 1870s, while Sandhurst photographer N. White managed to gain access to the Bendigo Hospital and took a number of head-shots of Evans wearing a 'white hospital nightshirt (or straight-jacket)' and looking 'wild eyed and probably affronted by the intrusion' which were used to create an image he also sold. The hospital refused requests from 'entrepreneurs' for Evans be ‘publicly exhibited'. 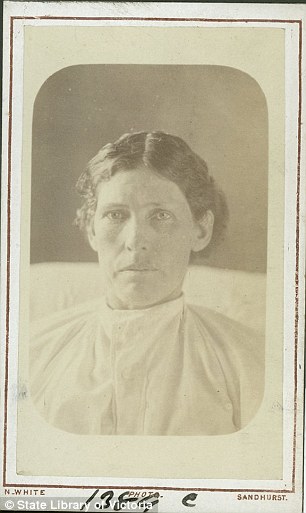 Another intrusion' was a gynaecological examination conducted by a Dr Penfold, which caused Evans to 'cry and scream' when the speculum was used, and resulted in a finding that he was 'physiologically female' and 'had carried and borne a child'. Evans later said the 'examination had injured' him. 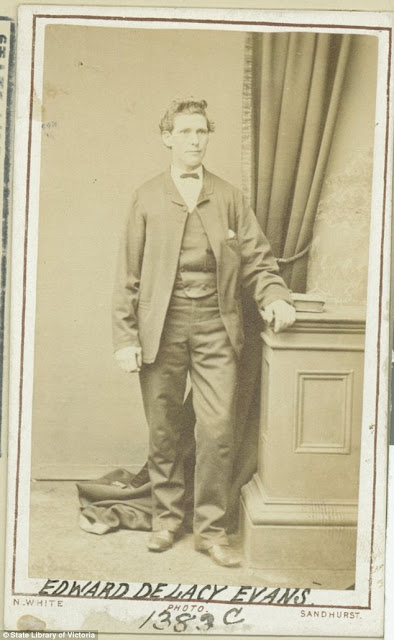 Evans' treatment in the asylum was described as brutal, in particular one highly invasive internal exam

On 10 October 1879, the Bendigo Hospital declined a request by the Kew Asylum to return Evans as he 'was improving daily, and will soon be in a fit state to be discharged'.  By December, Evans was declared 'cured' and released, but, a few days later, dressed in female clothes, he was 'still mentally distressed' when he gave evidence in support of Marquand's unsuccessful suit against her brother in law Loridan for child support.

In late December 1879, Evans was part of public exhibition events although it was noticed that 'neither mind nor body possesses the vigour once so noticeable'. 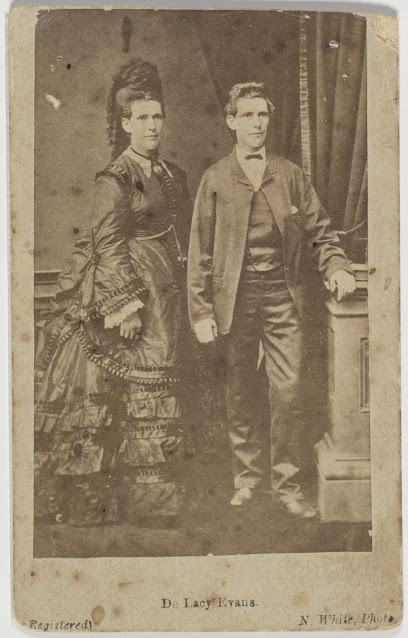 A carte de visite of Evans created, most likely as a 'cut & paste', by photographer N. White, of Bendigo, Victoria, after September 1879, to be sold as a curiosity. In this image taken in 1879 Evans is dressed as a man (right), but has had his head superimposed onto the body of an overdressed woman (left)

By February 1881, Evans had applied for admittance to a Benevolent Asylum and he was sent to the Melbourne Immigrants’ Home.  He remained there until his death, twenty years later in 1901.

In 2006, sites associated with Evans were included in the Australian Lesbian and Gay Archives' queer history walk held as part of Melbourne's Midsumma Festival. 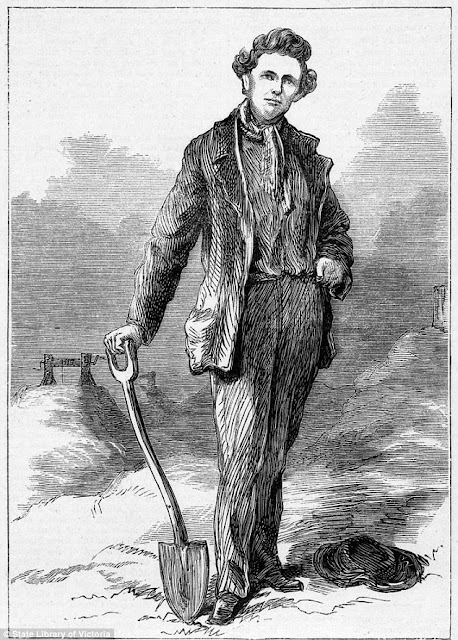