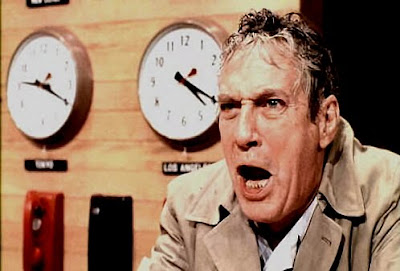 One of the best comments on modern day alienation and powelessness is Howard Beale's speech in the movie Network.  See it at:
http://www.youtube.com/watch?v=rGIY5Vyj4YM&feature=related

Its message seems more apt, and more immediate, than 1976 when the film was released.

I don't have to tell you things are bad. Everybody knows things are bad. It's a depression. Everybody's out of work or scared of losing their job. The dollar buys a nickel's worth; banks are going bust; shopkeepers keep a gun under the counter; punks are running wild in the street, and there's nobody anywhere who seems to know what to do, and there's no end to it.
We know the air is unfit to breathe and our food is unfit to eat. And we sit watching our TVs while some local newscaster tells us that today we had fifteen homicides and sixty-three violent crimes, as if that's the way it's supposed to be!
We all know things are bad -- worse than bad -- they're crazy.
It's like everything everywhere is going crazy, so we don't go out any more. We sit in the house, and slowly the world we're living in is getting smaller, and all we say is, "Please, at least leave us alone in our living rooms. Let me have my toaster and my TV and my steel-belted radials, and I won't say anything. Just leave us alone."
Well, I'm not going to leave you alone.
I want you to get mad!
I don't want you to protest. I don't want you to riot. I don't want you to write to your Congressman, because I wouldn't know what to tell you to write. I don't know what to do about the depression and the inflation and the Russians and the crime in the street.
All I know is that first, you've got to get mad.
You've gotta say, "I'm a human being, goddammit! My life has value!"
So, I want you to get up now. I want all of you to get up out of your chairs. I want you to get up right now and go to the window, open it, and stick your head out and yell,
"I'm as mad as hell, and I'm not going to take this anymore!!

Email ThisBlogThis!Share to TwitterShare to FacebookShare to Pinterest
Labels: Network