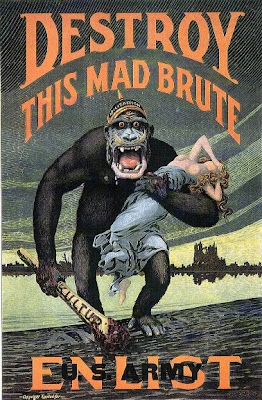 Whilst looking up material for the item of a few days ago about the first Anzac Day, I became sidetracked into looking at World War 1 recruitment posters. Being diverted is a common feature of using the internet.  Before you know it, an hour has elapsed in looking at more and more divergent items.
Wartime recruiting posters tend to be of two types: those that seek to instil guilt feelings at not being “over there” and those that inspire rage against a monstrous and barbaric enemy, sometimes both together.  Subtlety is not a prevailing characteristic. The posters were plain, blunt and with a short, clear message: Enlist Now! The posters were intended to not only send a message to those who were capable of enlisting but also to the population at large, thereby putting indirect pressure on those who had not enlisted.
The posters of  WW1 tended to vilify the enemy more than those of WW2.  Not infrequently Europe (or America) was depicted as a semiclad maiden violated at the hands of a brutish enemy.  American posters appear to be the most blunt, an example above.
Readers familiar with the art of Norman Lindsay (1879-1969) will be aware of his children’s works such as The Magic Pudding, and his artworks of buxom naked women, satyrs and demons. His works include oils, water colours, lithographs, etchings and sculpture in concrete and bronze. Those who have never paid a visit to his former home and studio at Faulconbridge in the Blue Mountains, now also a gallery, will find such a visit worthwhile. There you will also discover another field in which he was interested and in which he was expert: model ship building.
Less well known is that at the inception of  WW1 he was commissioned to produce a number of propaganda and recruitment posters. He also provided cartoons on a similar theme to The Bulletin. A selection of those works appear below, click on the images to enlarge them.
Lindsay’s father had died in 1915. His younger brother Reginald enlisted in the AIF shortly after and was killed in France on 31 December 1916. The heroic ANZAC portrayed in many of his recruitment posters is said to bear a marked resemblance to photographs of Reg.
My reading has not enabled me to determine whether Lindsay was a fervent believer in the messages on his posters or whether they were revenue earners. Australian society was not uniformly in support of the war, even at the beginning when support and enthusiasm were at their greatest. One commentator has described Lindsay as being “one of the main divisive figures of the war” in that “many of his posters encouraged hatred of the enemy, or confrontation between groups of Australians, or both.”
http://www.anzacday.org.au/history/ww1/homefront/homefront.html
Norman Lindsay: 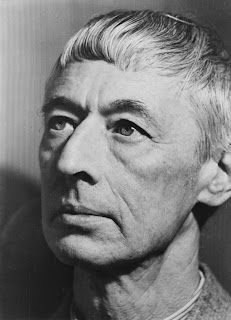 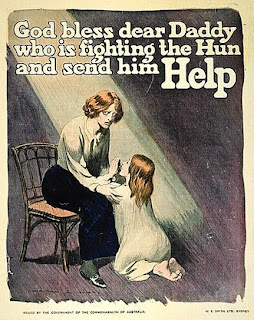 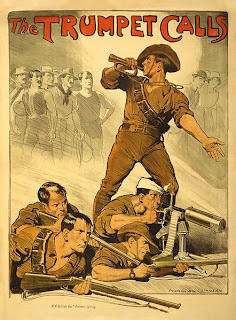 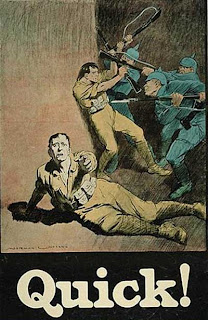 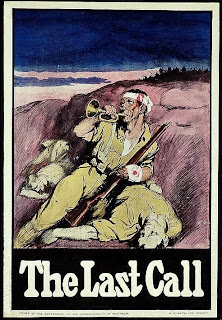 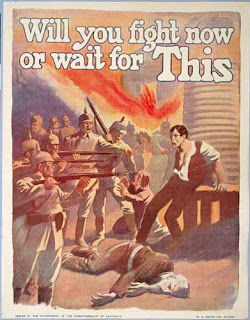 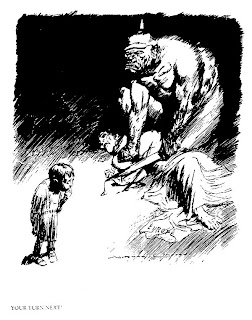 In the cartoon above, the prone female figure bears the word "Europe" on the hem of her skirt, the little boy has the word "Australia" on his shirt and the caption reads "Your turn next".
Posted by BytesMaster at 11:20 AM