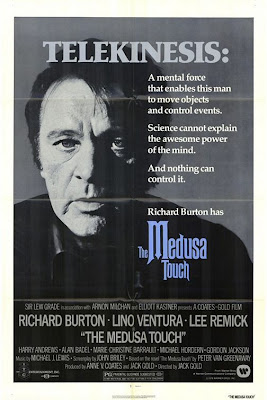 Comment:
This movie is, imho, vastly underrated. The brooding presence and wonderfully evocative voice of Richard Burton make this movie. It is a hard one to find but worth tracking down, otherwise try getting a copy on Amazon. I believe that it is available on DVD.
Not only are the matters raised in this movie thought provoking (no pun intended), there are scenes which are ironically and horribly topical in the present day, notwithstanding that the movie was made in 1978, more than 30 years ago.  The scene of the airliner striking the office block is horrific in the light og 9/11, but that hasn't stopped more recent posters higlighting that fact: 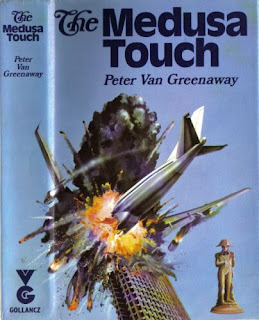 Although there is considerable disaster in this movie, it is not a disaster flick, It is a psychological thriller that will stay in the mind long after the movie has finished.
The movie received a lukewarm critical reception and Burton has been criticised but I like, the movie, I like the story and I like Burton’s performance. I also think that with the passage of time the movie will be re-evaluated and acclaimed. This has to be one of Burton’s best performances and one that suits his persona, and his voice, superbly.
Story (spoilers ahead):
The movie begins with French detective Brunel, who is on exchange in London, investigating the murder of John Morlar, a novelist. Morlar has been severely bludgeoned about the head with a statuette. We are not shown the injuries but they are severe enough that even the detectives are shocked. As they examine the crime scene, they hear a noise from Morlar and discover that he is still alive, despite his injuries. He is rushed to the hospital.
Morlar kept journals and had begun seeing a psychiatrist, Dr Zonfeld, played by Lee Remick. Brunel’s reconstruction of Morlar’s past life from the journals, and from conversations with Zonfeld, are shown in flashbacks from his childhood days onwards. It emerges that Morlar’s life has been marked by the deaths of people he disliked or who have offended him, and by inexplicable catastrophes.
Morlar’s seing Dr Zonfeld was an attempt to deal with his telekinetic abilities, the ability to move objects by the power of his mind. He tells Zonfeld that he has killed the people who have upset him by making events happen: fire, car accidents, heart attack and the like. He also tells Zonfeld that he is disgusted with the world. The following exchange takes place at the first meeting.
John Morlar:   I have a "gift" for disaster.
Doctor Zonfeld:   You seem to have survived.
John Morlar:   I don’t mean for me, I mean for others.
Zonfeld does not believe him. To convince her, he makes a passenger airliner fall from the sky into a highrise apartment block Later he causes the loss of a manned US space mission. He tells her “I am the man with the power to create catastrophe.”
Zonfeld finally believes him. She attends his apartment as he watches the failure of the space mission on TV. “Ahhh, finally, the response”, he says to her. She hits him with a statue taken from his bookshelf. She keeps hitting him to ensure that he cannot make any more disasters happen. She later suicides.
In the hospital, Morlar is heavily bandaged with his head appearing misshapen under the bandages, comatose, hooked to various machines and with only his brain still functioning. It appears as though Morlar is keeping himself alive by willpower.
Brunel is at Minster Cathedral, trying to convince the Assistant Commissioner to vacate the area because the people present are in danger. The cathedral has been the subject of fundraising for repair and restoration, with a large VIP contingent, including the Royal Family and heads of governments, arriving for an official function in connection therewith. Brunel had read in Morlar’s journal a statement by Morlar that “I will bring the whole edifice down on their unworthy heads” and has realised that Morlar was referring to Minster Cathedral and this function. As the cathedral begins cracking and falling, the Assistant Commissioner agrees and tries to vacate those present. Brunel rushes to the hospital. At the hospital Doctor Johnson treats Morlar and watches as the monitors recording brain activity become more and more active. At the same time the images of the cathedral collapsing on the people are shown on the TV that is in the room. As the carnage on the screen worsens, the brain activity on the monitors becomes more furious and louder. Brunel enters and frantically tries to finish Morlar by disconnecting everything. The monitor flatlines but the collapse of Minster Cathedral continues.
Despite the monitors being silent and the screen on flatline, Morlar’s hand twitches. A pen is put in his hand and a pad placed underneath it. He scrawls the word “Windscale”. Doctor Johnson looks confused and says to Brunel that that is the name of the nuclear power plant. Brunel understands the significance and looks down at Morlar, whose eyes suddenly open. The furious brain activity on the monitor begins again and a voiceover by Morlar says “I am the man with the power to create catastrophe.”
Clips:


Morlar as a barrister is at:
http://www.youtube.com/watch?v=bLDmyP2g8Oc
The clip is also good in showing some of the aspects mentioned in the above synopsis.
The clip with Minster Cathedral and the end of the movie is at:
http://www.youtube.com/watch?v=Me1UQXFzxzc&feature=related
This last clip is a must see.
There is a detailed review of the movie at:
http://www.aycyas.com/medusa.htm
If you get the opportunity, watch the movie, if only as a superb memory of Richard Burton.
Posted by BytesMaster at 10:36 PM

Email ThisBlogThis!Share to TwitterShare to FacebookShare to Pinterest
Labels: The Medusa Touch