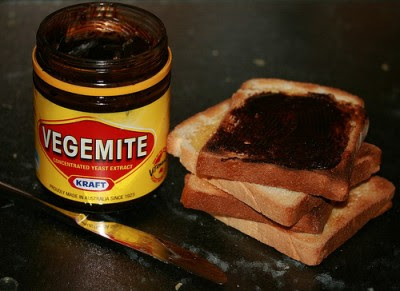 Do you do dull and boring things with your Vegemite, like put it on your toast and eat it?

Personally, I can't stand the stuff and it's beyond me how anyone can think of it as a delicacy.  Still, each to his own.

Were you someone who was always being told off for playing with your toast at the breakfast table?

Just think, if you had been encouraged instead of being roused on, if your creative urges had been allowed to flourish, you might have become the Oz Titan of Toast, the Viscount of Vegemite, much like the person in the following video clip (click on the link):

Email ThisBlogThis!Share to TwitterShare to FacebookShare to Pinterest
Labels: Vegemite and Toast