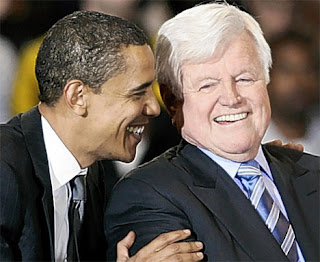 Yesterday I posted a part of a eulogy by Edward Kennedy for his late brother Robert.  Today I post a  part of a eulogy delivered on 29 August 2009 by Barack Obama for Edward Kennedy.
There are often comments made in a eulogy which have an application beyond the eulogy moment and beyond the circumstances relating to the deceased.  So it was with the Robert Kennedy eulogy and so it is with the comments below.
It is part of what the philosopher Mufasa in The Lion King referred to as The Circle of Life, or Death if you prefer:  one day you’re the eulogiser, the next you’re the eulogee.

From the President Obama eulogy:
We cannot know for certain how long we have here. We cannot foresee the trials or misfortunes that will test us along the way. We cannot know God's plan for us.
What we can do is to live out our lives as best we can with purpose, and love, and joy. We can use each day to show those who are closest to us how much we care about them, and treat others with the kindness and respect that we wish for ourselves. We can learn from our mistakes and grow from our failures. And we can strive at all costs to make a better world, so that someday, if we are blessed with the chance to look back on our time here, we can know that we spent it well; that we made a difference; that our fleeting presence had a lasting impact on the lives of other human beings.
This is how Ted Kennedy lived. This is his legacy. He once said of his brother Bobby that he need not be idealized or enlarged in death beyond what he was in life, and I imagine he would say the same about himself. The greatest expectations were placed upon Ted Kennedy's shoulders because of who he was, but he surpassed them all because of who he became. We do not weep for him today because of the prestige attached to his name or his office. We weep because we loved this kind and tender hero who persevered through pain and tragedy - not for the sake of ambition or vanity; not for wealth or power; but only for the people and the country he loved.

Posted by BytesMaster at 1:55 AM