Byter Doug sent me an email last week in response to the posting of the 1956 Pulitzer photographic award.  That photo was of a bomber that landed in a suburban street after the propellers ceased functioning, resulting in the deaths of the pilots but no others. Doug wrote:

Very interesting pictures, as always. I really enjoy this series.

I always admire those two bomber pilots. They would deliberately have sacrificed their lives in order to avoid civilian casualties. Given the year, those pilots would presumably have flown numerous missions over Germany or Japan, yet willingly died in the US.

Given the space available (along with power lines and wider streets having more traffic), it was a bloody good landing. They would have died happy with their efforts.

As a writer said about the firemen in the World Trade Center buildings, they did not lose their lives, they gave their lives. 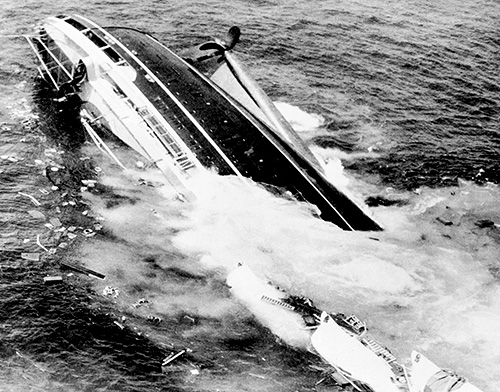 (Official description)  A dramatic and outstanding photographic sequence of the sinking of the liner SS Andrea Doria, the pictures being taken from an airplane flying at a height of 75 feet only nine minutes before the ship plunged to the bottom. (The second picture in the sequence is cited as the key photograph.)

The SS Andrea Doria was an ocean liner in the Italian fleet, which was home ported in Genoa. The ship is most famous for its sinking in 1956. On July 25, 1956 the cruiser was approaching the coast of Nantucket, Massachusetts bound for New York City when it collided with the eastward-bound MS Stockholm of the Swedish American Line. The accident would become one of history's most infamous maritime disasters. The shortage of lifeboats might have resulted in significant loss of life but improvements in communications and rapid responses by other ships averted a disaster similar in scale to the Titanic.

In all, 1660 passengers and crew were rescued and survived, while 46 people died as a consequence of the collision. The evacuated luxury liner capsized and sank the following morning. In 1957, Harry A. Trask won the Pulitzer Prize for his dramatic photographic sequence of the sinking of the SS Andrea Doria. The pictures were taken from an airplane flying at a height of 75 feet, nine minutes before the ship sank.

The cause of the collision with the Stockholm and the loss of the Andrea Doria generated much interest in the media and many lawsuits. Largely because of an out-of-court settlement agreement between the two shipping companies during hearings immediately after the disaster, no determination of the cause(s) was ever formally published. Although greater blame appeared initially to fall on the Italian liner, more recent discoveries have indicated that a misreading of radar on the Swedish ship may have initiated the collision course, leading to errors on both ships.

The Andrea Doria was the last major transatlantic passenger vessel to sink before aircraft became the preferred method of travel.

By the way moment:

After the ships had separated, as the Stockholm crew members were beginning to survey the damage, on the deck of the Stockholm aft of the wrecked bow they discovered 14-year-old Linda Morgan with a major arm injury requiring surgery. It was soon determined that she had been an Andrea Doria passenger, had miraculously survived the impact, and had been somehow propelled far onto the Stockholm's deck. Her half sister Joan Cianfarra, who had been sleeping in Cabin 52 with her on the Andrea Doria, had perished, as had her stepfather. He had been in an adjacent cabin with Linda's mother, who was seriously injured but survived and had to be extricated. 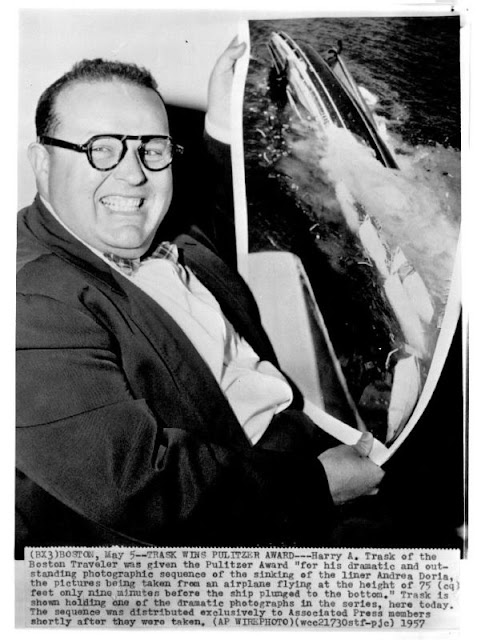 Photographer Harry Trask holds one of the photographs in the
Pulitzer winning sequence. 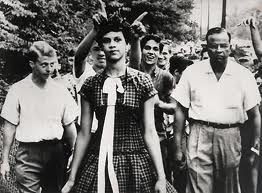 Dorothy Counts mocked by whites on her first day of school at a newly desegregated school.

Dorothy Counts, one of the first black students to enter the newly desegregated Harry Harding High School is mocked by whites on her first day of school. People threw rocks and screamed at her "Go back where you came from." Walking beside her is Dr. Edwin Tompkins, a friend of the family and a professor at the black college Johnson C. Smith University.

After a string of abuses, Dorothy's family withdrew her from the school after only four days.

Across the United States that week children had been enrolling for the new school year. In the south tension was particularly high for districts trying to comply with the Supreme Court's ruling that states should integrate their schools "with deliberate speed".

In the 1954 decision of Brown v. Board of Education of Topeka the US Supreme Court declared that state laws establishing separate public schools for black and white students were unconstitutional. The decision overturned the Plessy v Ferguson decision of 1896 which allowed state-sponsored segregation. The Court’s unanimous (9–0) decision stated that "separate educational facilities are inherently unequal." As a result racial segregation was ruled a violation of the Equal Protection Clause of the Fourteenth Amendment of the Unites States Constitution. This ruling paved the way for integration and the civil rights movement.

The harassment shown in the above photograph started when the wife of John Z. Warlick, the leader of the White Citizens Council, urged the boys to "keep her out" and at the same time, implored the girls to spit on her, saying, "spit on her, girls, spit on her."

Dorothy walked by without reacting, but told the press that many people threw rocks at her, most of which landed in front of her feet, and that many spat on her back. More abuse followed that day. She had trash thrown on her plate while eating her dinner and the teachers ignored her. The following day, she was befriended by two white girls who soon drew back when they were harassed by classmates. Her family received threatening phone calls and after four days of extensive harassment, which included a smashed car and having her locker ransacked, her father decided to take his daughter out of the school. Her family had been told by the school administrators and school officials that they could not guarantee her safety.

At a press conference, he said:

It is with compassion for our native land and love for our daughter Dorothy that we withdraw her as a student at Harding High School. As long as we felt she could be protected from bodily injury and insults within the school’s walls and upon the school premises, we were willing to grant her desire to study at Harding.

The family moved to Pennsylvania, where Dorothy Counts attended an integrated school in Philadelphia.

The students had done what had been asked of them and had kept her out. 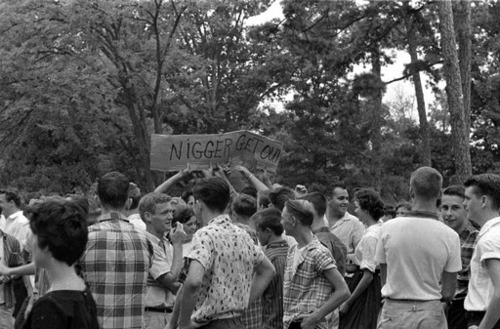 Posted by BytesMaster at 2:19 AM