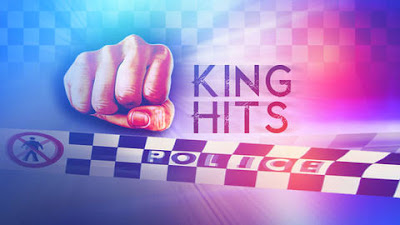 King Hit:
A term widely used in Australia. A very hard punch, usually delivered to the head, that is completely unexpected. Most often results in knock outs or knock downs. Vie
wed upon by most as an act of cowardice. Similar in meaning to sucker punch.
The boys beat the shit out of this nev after he king hit Joey in the pub.
- Urban Dictionary
http://www.urbandictionary.com/define.php?term=king%20hit

Push to refer to king hit attacks as 'coward punches' after teen left in coma
The New South Wales government has backed calls for king hit attacks to instead be referred to as "coward punches". It comes after the family of Daniel Christie released a statement expressing gratitude for the support of doctors, police and the general public. The 18-year-old is in a critical condition in St Vincent's Hospital after being assaulted in Kings Cross on New Year's Eve.
- News Report, ABC Online, 03.01.2014
http://www.abc.net.au/news/2014-01-03/push-to-refer-to-king-hit-attacks-as-coward-punches/5183260

Overseas readers will not be aware that Sydney is experiencing a rise in alcohol fuelled street violence (or perhaps only increased media reporting of same, I don't know which). Certainly the media and talk back shows have increasingly focused on alcohol abuse by young persons, on violence and the apparent increase in the incidence of king hits, referred to in the US as ‘sucker punches”. There have been a number of young persons who have died from such blows and others who have sustained serious injuries.

I have not yet seen any media correlation of such assaults with a craze that is increasing in Britain and the US.  It is referred to as "Knockout" and consists of young people, mostly teenagers, randomly striking unknown pedestrians to try to knock them out with one punch.  According to one report, it has caused deaths in both countries.
http://www.dailymail.co.uk/news/article-2511614/Teen-game-randomly-punching-strangers-nation-wide-problem--CONGRESSWOMAN-latest-victim.html

Suggestions that the term 'king hit" be correctly renamed as "coward’s punch" had me wondering as to the origin of the KING HIT term. Why would a nasty, cowardly blow be equated with royalty?

Beyond one dictionary stating simply that the expression dates from 1920-1925, I have been able to find only one other reference to the origin of the expression, an article from November 2000 on the Rule of Law by Professor Jim Corkery of Bond University.

His article opens with these two paragraphs:

THE TERM “KING HIT” is well known in rugby league and ice hockey circles. It is, of course, not a practice in rugby union. Today, being “king hit” means to be hit heavily when you are not expecting the blow. You do not rise quickly after being “king hit”.

The origin of the term concerns “the rule of law”. Brilliant English Chief Justice, Sir Edward Coke felt the force of his King’s fist in 1608 when he gave King James 1 the unwelcome news that “The king is not subject to men, but is subject to God and the law”. James 1 thought he should not be subject to man made law. It was a revolutionary thought. Enraged, he felled Coke to the floor. Thus “king hit”. 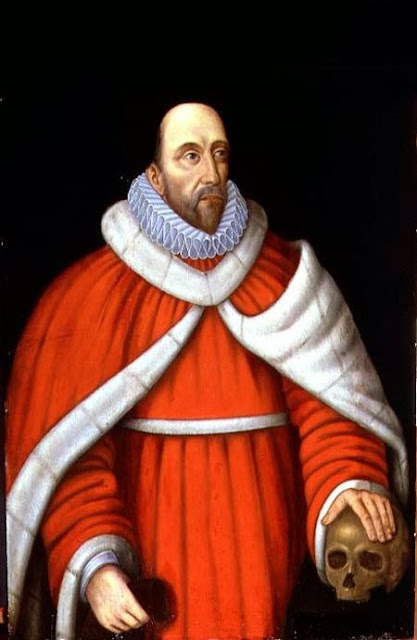 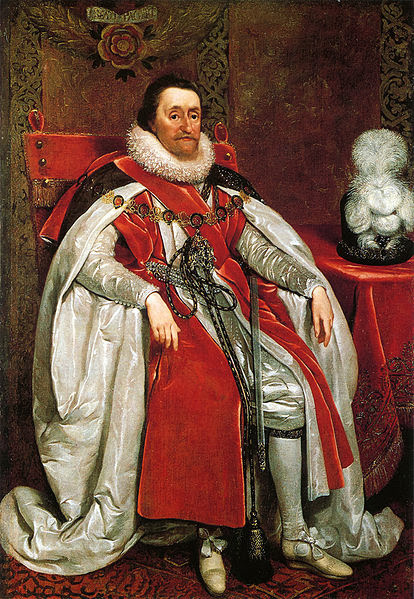 Is Professor Corkery, who is a professor of law rather than an etymologist, correct as to the origin of the term?

My readings indicate that Coke was not actually struck by James 1, although Professor Corkery may have been using the expression in a symbolic sense. Certainly there was a threat of a blow, as the following contemporaneous account indicates:

After which [i.e. after Coke C.J.’s remonstrance] his majestie fell into that high indignation as the like was never knowne in him, looking and speaking fiercely with bended fist, offering to strike him etc. which the Lord Coke perceiving fell flat on all fower; humbly beseeching his majestie to take compassion on him and to pardon him, if he thought zeale had gone beyond his duty and allegience. His Majesty not herewith contented, continued his indignation. Whereupon the Lord Treasurer, the Lord Cookes unckle by marriage, kneeled downe before his Majestie and prayed him to be favorable.

In the absence of any other explanation, it is as good as any.

Having discussed a king hit, are you perhaps wondering why items as disparate as a blow, a contract killing, a drug injection and a chart success are all described as "a hit"?

The following article, reprinted from The Grammarphobia Blog, explains those aspects . . .

A:
When we say a movie or an album is a “hit,” we aren’t implying that it got there by physical violence, even when the movie or album has a lot of rough stuff in it.

So why do we use such a pugilistic word to refer to a popular success? There’s a good reason, as it turns out. The noun “hit” began life pretty violently—as a blow, a stroke, a collision, or an impact. But that kind of “hit” eventually gave us a successful stroke in any kind of endeavour, especially in the entertainment field. Here’s how the word evolved.

The noun “hit” is derived from the earlier verb “hit,” which was nonviolent when it showed in English nearly a thousand years ago, according to the Oxford English Dictionary. The verb is believed to have come into English from Old Norse, where hitta meant “to come upon, light upon, meet with, get at, attain to, reach one’s aim, succeed, and the like.” This sense of getting at or attaining something is what the verb “hit” originally meant when it was first recorded in English sometime before 1075.

It wasn’t until two centuries later, around 1275, that “hit” got its more violent meaning—“to get at or reach with a blow, to strike,” the OED says. Both senses of the verb are still with us today. The original Old Norse meaning survives in phrases like “hit the road,” “hit the trail,” “hit my meaning,” “hit a happy medium,” “hit upon an idea (or fact),” “hit it off,” “hit the mark,” “hit the truth,” “hit the sack” (to get to bed), and so on. All these senses of the verb are nonviolent. They don’t mean crashing or colliding into something, but rather reaching or attaining or getting at it.

The newer and more violent sense of the verb “hit” is the one that’s more familiar today, and it’s the one that gave us all senses of the noun “hit”—including the one you ask about. The noun “hit” came along in the mid-15th century, and boy was it violent in the beginning! The OED’s earliest citation is from Ludus Coventriae (circa 1450), an anonymous English miracle play: “To hym wyl I go, and geve hym suche an hete / That alle the lechis of the londe his lyf xul nevyr restore.” (“To him will I go, and give him such a hit that all the leeches of the land his life shall never restore.”) Yikes! It’s hard to tell what would be worse—the hit or the leeches.

Many uses of the noun are violent, of course—some more than others. For instance, a “hit” came to mean a killing, perhaps for hire, in the mid-20th century. And this sense of the noun has been used attributively—that is, as an adjective—in phrases like “hit man” and “hit squad.” But “hit” has more peaceful meanings as well. For instance, a “hit” can be a stroke of good luck or a stroke of a ball on the playing field. We’re not sure, though, how to list a “hit” of drugs: violent or nonviolent?
More pertinent to your question is a usage that the OED dates to the early 19th century: “a successful stroke made in action or performance of any kind; esp. any popular success (a person, a play, a song, etc.) in public entertainment.” This sense of the noun has also been used attributively in phrases such as “hit parade” and “hit song,” the OED adds. The earliest recorded use of this sense of “hit” is from a letter written in 1811 by the comedian Charles Mathews: “Maw-worm was a most unusual hit, I am told.” (Mathews played the role of Mr. Mawworm in The Hypocrite, by the Irish playwright Isaac Bickerstaff, on the London stage in 1809.) And since we like quoting from mysteries, here’s a citation from Fredric Brown’s Murder Can Be Fun (1951): “She had big blue eyes that would have been a hit on television.”

We’ll end with the use of the noun “hit” in computing to mean a match in a processing task or a connection with a website. The OED’s first citation for this usage, from Charles J. Sippl’s Computer Dictionary and Handbook (1967), defines the term “hit” in digital file maintenance as “the finding of a match between a detail record and a master record.”

To finish, let’s go to an expression a little less violent, but not necessarily more savoury.

According to etymologist Rawson, in 1989, the actual origin is believed to be a joke (sometimes attributed as an Australia joke):

A man in a crowded bar needed to defecate but couldn't find a bathroom, so he went upstairs and used a hole in the floor. Returning, he found everyone had gone except the bartender, who was cowering behind the bar. When the man asked what had happened, the bartender replied, 'Where were you when the shit hit the fan?' 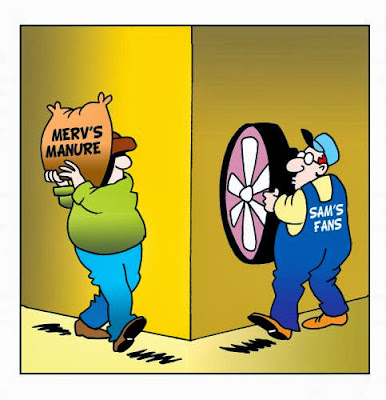