4 Ships That Torpedoed Themselves


Hello Byters. I hope you all enjoyed the Christmas days. We now begin the countdown towards 2015 and in the coming days I will have a look at some item on a new year theme.


* * * * * * * *
In the meantime, I came across a reference to a ship that sank itself during WW2 and, on looking into it a bit deeper, found that a number of ships actually either torpedoed themselves or had near misses from torpedoes that circled back at them. It must be terrifying to see your own torpedo heading back at you, or to hear it if you are submerged, and know that disaster is likely.

According to Roger Branfill-Cook in “Torpedo: The Complete History of the World’s Most Revolutionary Naval Weapon”, “Two French destroyers, a British cruiser and at least two US submarines managed to torpedo themselves.”

WW2 Mark 14 torpedos suffered from a number of flaws and defects: they ran deeper than the depth for which they were set, there was often premature firing, the contact exploder often failed to fire the warhead and they also ran circular on occasion.

The last problem, being torpedo guidance failure, was associated with the gyroscopes and rudders of the torpedoes. When torpedoes were fired out of the tubes, they did not necessarily head for their targets in a straight line. A submarine might not, for instance, be lined up for a straight shot, hence torpedoes could be programmed to curve and then straighten towards the target, Sometimes because of gyroscope failure, rudder failure or bad programming, the system did not operate properly and the torpedo did not straighten, Instead it travelled in a circle to arrive back at its point of origin. 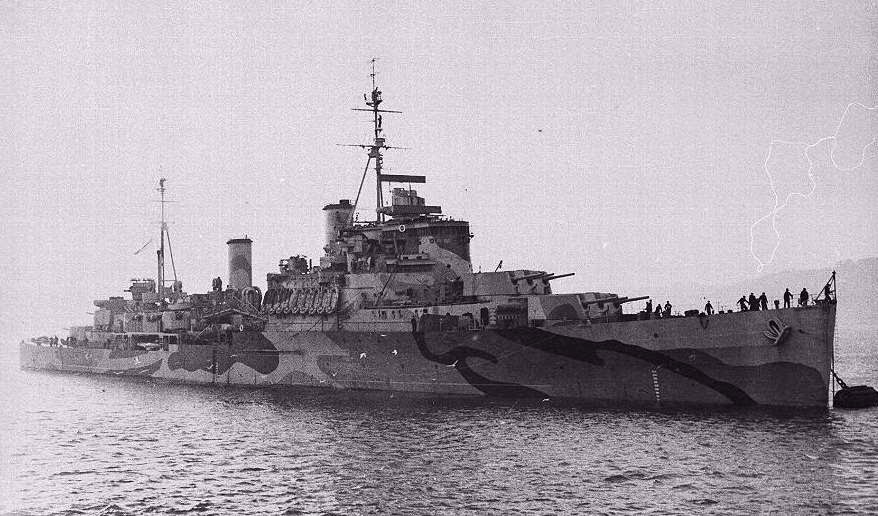 A British cruiser launched in 1941, HMS Trinidad was taking part in Arctic convoy duty in1942 when she engaged the German destroyer Z-26. Although she sank the destroyer, one of the four torpedoes launched by Trinidad had a faulty gyro mechanism (possibly having been affected by the icy waters), causing that torpedo to make a circular run and strike the Trinidad. 32 men were killed.

Although she was able to make it to Murmansk and have partial repairs carried out, on the journey home, accompanied by 4 British destroyers, she was attacked by more than twenty German bombers. All attacks missed, except for one bomb that struck near the previous damage, starting a serious fire. Sixty-three men were lost including twenty survivors from HMS Edinburgh, which had been sunk two weeks earlier. The decision was taken to scuttle her and she was torpedoed and sunk in the Arctic Ocean. 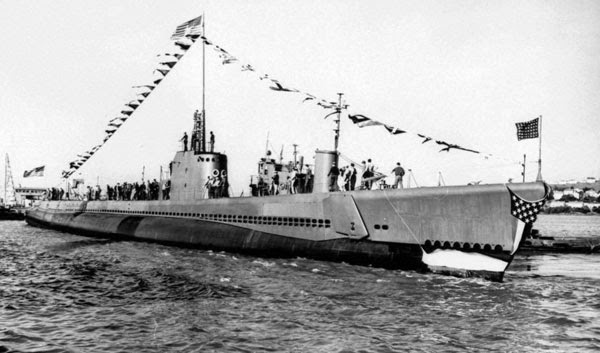 The USS Tullibee was a US submarine launched in November 1942.  She operated out of Pearl Harbour. Whilst on her fourth patrol in March 1944 she came upon a convoy consisting of a large troop and cargo ship, two medium sized freighters, two escort vessels and a large destroyer. After sustaining a depth charge attack, Tullibee launched two torpedoes from her bow tubes. Two minutes later the Tullibee was rocked by a huge explosion, which was found later to have been caused by one of the torpedoes completing a circular run.

Gunner's Mate C.W. Kuykendall, on the bridge at the time, was knocked unconscious and thrown into the water. When he regained consciousness, the submarine was gone. He heard voices in the water for about ten minutes before they stopped. The next day, he was picked up by a Japanese destroyer and made a prisoner of war, being released after VJ Day.

79 men died in the sinking. Kuykendall was the only survivor. 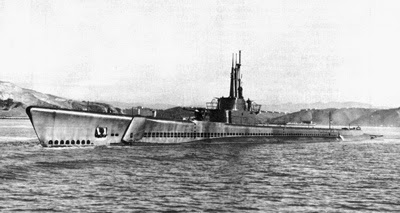 The USS Tang was a US submarine launched in August 1943 and sunk on 24 October 1944. In her brief career Tang sank 33 ships and her captain, Commander Richard O’Kane, received the Medal of Honor for her last two engagements on 23 and 24 October 1944.

In her last engagement, Tang sunk a destroyer and a number of freighters, tankers and transports, 13 in total, part of a convoy, using 23 of her 24 torpedoes. The final torpedo was fired but made a circular run and hit the Tang 20 seconds later.

Of the nine officers and men on the bridge, three were able to swim through the night until picked up eight hours later. One officer escaped from the flooded Conning Tower, and was rescued with the others.

The submarine settled in 60 metres (180 feet) of water with the men crowded in to the forward torpedo room to escape. Escape was delayed by depth charges and there were only 8 men who survived from the men who escaped from the sunken submarine. Picked up by a destroyer escort, they were beaten and tortured by survivors of the torpedoed ships. According to Commander O’Kane, "When we realized that our clubbings and kickings were being administered by the burned, mutilated survivors of our own handiwork, we found we could take it with less prejudice."

78 men were lost when the Tang sank itself with its last torpedo. 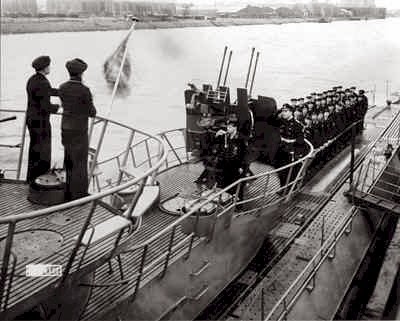 The U-869 departs on her only patrol.

U-869 was a German submarine launched in October 1943. It conducted one World War II war patrol without success. It suffered no casualties to its crew until it was lost in February 1945.

For many years it was recorded, and believed, that U-869 had been sunk off Gibraltar in a depth charge attack, with the loss of all 55 officers and crew.

An unidentified U-boat wreck, dubbed U-Who, discovered off the coast of New Jersey in 1991 was established from identifying items and numbers to be U-869. The finders of U-869 have also provided persuasive arguments that the sinking was due to a circle runner torpedo.