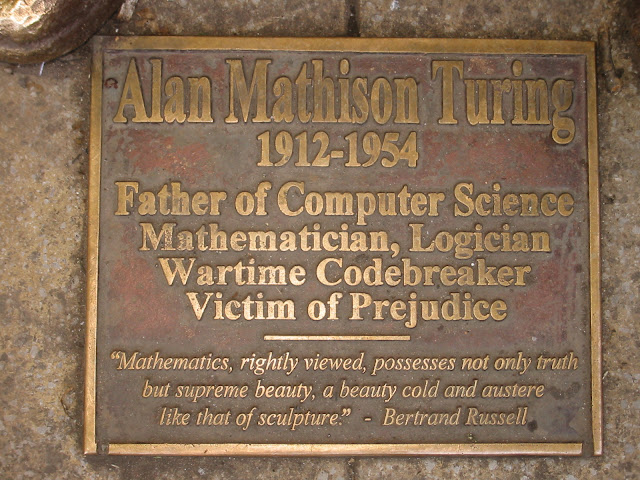 There was a news report 2 days ago that a British government spook agency had apologised for its past treatment of gays, especially Alan Turing, who helped win WW2. Have a look at The Imitation Game for the story of Turing.
The news report:

The head of Britain's security agency GCHQ has apologized for its ban on homosexuals which led to the dismissal and subsequent suicide of one of its most brilliant code breakers, Alan Turing, in the 1950s. Robert Hannigan told a gay rights workplace conference in London that Turing had been an example to others because he was not afraid to think "differently and radically", according to a statement released by GCHQ. "(I want to) say how sorry I am that he and so many others were treated in this way," Hannigan said. "Their suffering was our loss."

GCHQ's ban on homosexuals was only lifted in the 1990s. The Government Communications Headquarters (GCHQ) is one of three intelligence and security agencies in Britain, along with MI5, the domestic spy agency and the Secret Intelligence Service (MI6), which gathers intelligence from abroad. The agencies had historically seen homosexuals as a security risk, considering them much more vulnerable to blackmail.

In an illustration of how far attitudes to homosexuality in Britain have changed, earlier this year MI5 was rated the country's most gay-friendly employer. Just six years ago it had ranked at 134th in the index. Hannigan paid homage to Turing, subject of the film 'The Imitation Game', for his mathematical genius which cracked a German code and shortened World War Two. He also created the world's first digital computer. Turing was dismissed in the 1950s, prosecuted for his sexuality and chemically castrated. He killed himself in 1954.

"To do our job, which is solving some of the hardest technology problems the world faces for security reasons, we need all talents and we need people who dare to think differently and be different," Hannigan said. "We need different backgrounds, experiences, intellects, sexualities, because it is in mixing all of those together that you get the creativity and innovation we desperately need." 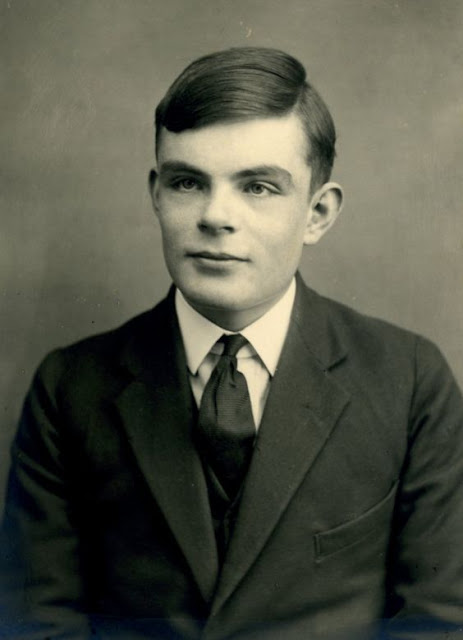 Pictured above is a young Alan Turing, aged 16, in 1928. A young teenager, looking forward to his future life, innocent, gentle.

One of the greatest minds of the twentieth century and the founder of computer science, he helped win the war by decrypting the German coding machine Enigma.

The story of the breaking of the German code is well told in The Imitation Game.

As regards his homosexuality and death, the following is from Wikipedia:

In January 1952, Turing, then 39, started a relationship with Arnold Murray, a 19-year-old unemployed man. Turing had met Murray just before Christmas outside the Regal Cinema when walking down Manchester's Oxford Road and invited him to lunch. On 23 January Turing's house was burgled. Murray told Turing that the burglar was an acquaintance of his, and Turing reported the crime to the police. During the investigation he acknowledged a sexual relationship with Murray. Homosexual acts were criminal offences in the United Kingdom at that time, and both men were charged with gross indecency under Section 11 of the Criminal Law Amendment Act 1885. Initial committal proceedings for the trial were held on 27 February during which Turing's solicitor "reserved his defence".

Later, convinced by the advice of his brother and his own solicitor, Turing entered a plea of guilty. The case, Regina v. Turing and Murray, was brought to trial on 31 March 1952. Turing was convicted and given a choice between imprisonment and probation, which would be conditional on his agreement to undergo hormonal treatment designed to reduce libido. He accepted the option of treatment via injections of what was then called stilboestrol (now known as diethylstilbestrol or DES), a synthetic oestrogen; this treatment was continued for the course of one year. The treatment rendered Turing impotent and caused gynaecomastia, [growth of male breast tissue], fulfilling in the literal sense Turing's prediction that "no doubt I shall emerge from it all a different man, but quite who I've not found out". Murray was given a conditional discharge.

Turing's conviction led to the removal of his security clearance and barred him from continuing with his cryptographic consultancy for the Government Communications Headquarters (GCHQ), the British signals intelligence agency that had evolved from GC&CS in 1946 (though he kept his academic job). He was denied entry into the United States after his conviction in 1952, but was free to visit other European countries, even though this was viewed by some as a security risk. At the time, there was acute public anxiety about homosexual entrapment of spies by Soviet agents, because of the recent exposure of the first two members of the Cambridge Five, Guy Burgess and Donald Maclean, as KGB double agents.Turing was never accused of espionage, but in common with all who had worked at Bletchley Park, he was prevented by the Official Secrets Act from discussing his war work.

On 8 June 1954, Turing's housekeeper found him dead. He had died the previous day. A post-mortem examination established that the cause of death was cyanide poisoning. When his body was discovered, an apple lay half-eaten beside his bed, and although the apple was not tested for cyanide, it was speculated that this was the means by which a fatal dose was consumed. An inquest determined that he had committed suicide, and he was cremated at Woking Crematorium on 12 June 1954. Turing's ashes were scattered there, just as his father's had been.

Philosophy professor Jack Copeland has questioned various aspects of the coroner's historical verdict. He suggests an alternative explanation for the cause of Turing's death, this being the accidental inhalation of cyanide fumes from an apparatus for gold electroplating spoons, which uses potassium cyanide to dissolve the gold. Turing had such an apparatus set up in his tiny spare room. Copeland notes that the autopsy findings were more consistent with inhalation than with ingestion of the poison. Turing also habitually ate an apple before bed, and it was not unusual for it to be discarded half-eaten. In addition, Turing had reportedly borne his legal setbacks and hormone treatment (which had been discontinued a year previously) "with good humour" and had shown no sign of despondency prior to his death, setting down, in fact, a list of tasks he intended to complete upon return to his office after the holiday weekend. At the time, Turing's mother believed that the ingestion was accidental, resulting from her son's careless storage of laboratory chemicals. Biographer Andrew Hodges suggests that Turing may have arranged the cyanide experiment deliberately, to give his mother some plausible deniability.

In 2009, following an Internet campaign, British Prime Minister Gordon Brown made an official public apology on behalf of the British government for "the appalling way he was treated." Queen Elizabeth II granted him a posthumous pardon in 2013

How sad is that.  This man helped win the war and is regarded as the father of computer science, yet was denied acknowledgment during his lifetime by the need for official secrecy because of the spook stuff.  Instead, he was branded a pervert and deviate, dragged through the criminal court and forced to undergo chemical castration.  Because he was gay. 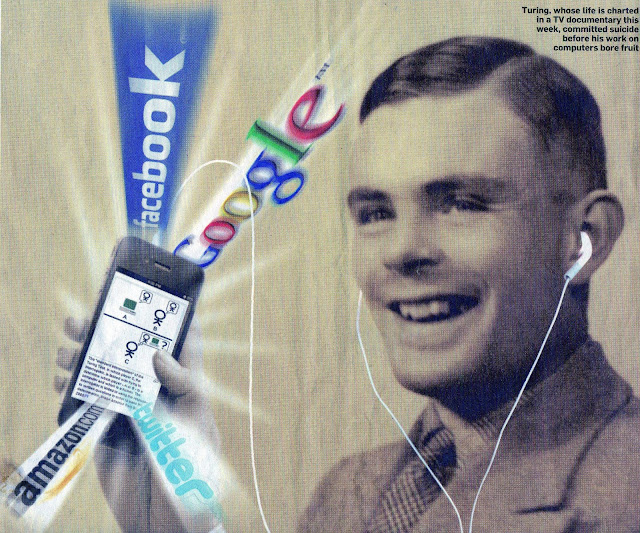 Posted by BytesMaster at 2:17 AM