A country’s folk songs, dating from before mass communications and often from areas and situations of isolation, whether in the country, onboard ship, on the goldfields and so on, frequently record in song such things as events, people, feelings, opinions and culture. They can be more than just a rollicking good, traditional song – often they are a glimpse of the past, an insight into a different era, lifestyle, hardship and people. They will also show how far we have travelled. Perhaps in 200 years songs about Covid will have developed the status of folk songs.

Lime Juice Tub is interesting and fascinating for all of the above reasons, plus a lively folk song to boot.

In the above clip the man in the hat and suit is playing a lagerphone, the term used in Australia although the instrument is found in many countries under a variety of names. In bygone days in the bush when times were hard and resources scarce, lagerphones would be made by nailing beer (lager) bottle tops to a length of timber which could then be thumped on the floor, creating the sound of a bass drum and a tambourine. It could also be struck with a stick and, on some lagerphones, bowed along a serrated portion. Another improvised instrument in bush bands was the tea chest bass. Washboards with metal thimbles were also used. Even everyday items such as spoons were co-opted. 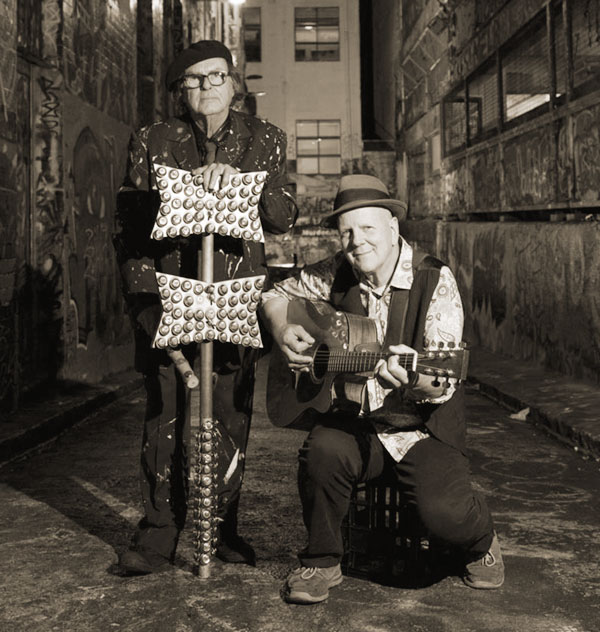 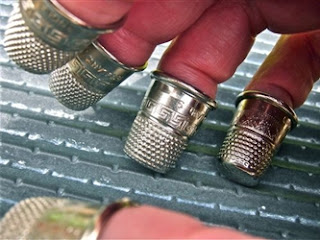 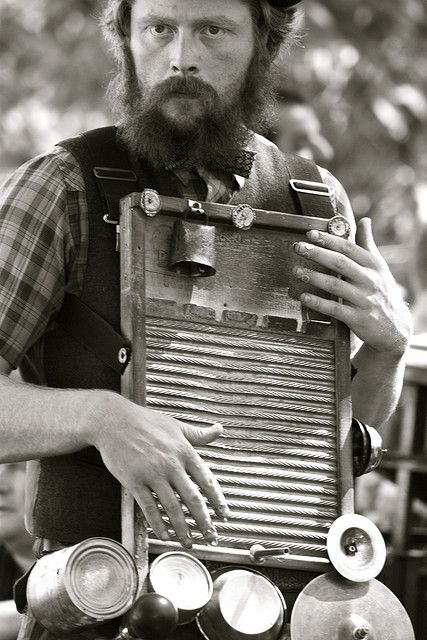 A version of Lime Juice Tub by John Kane:
https://www.youtube.com/watch?v=IY_eBMejsRs

The Song and title: 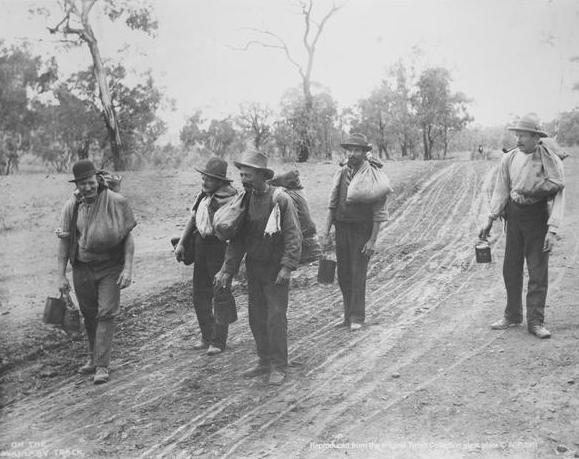 the floor of the shearing shed: 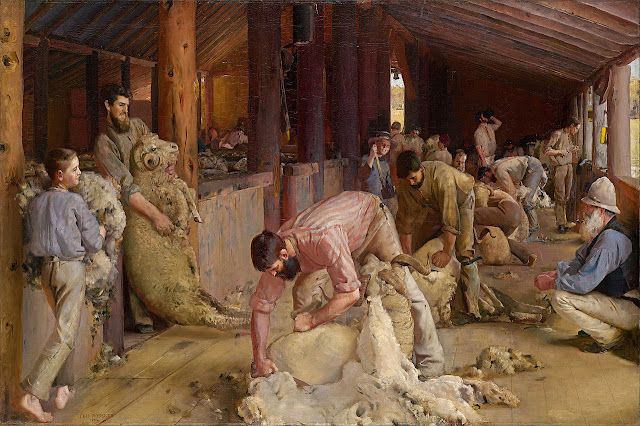 Although the term is today commonly associated with US Marines (G’day Ron 😊), in this context I believe (as far as I can make out) it refers to sheep and goats developing abscesses in the neck region from either a bacteria or from grass seeds.
____________________

Sheep dags are the dried faeces left dangling from the wool on a sheep's rear end.

It has also come to mean, in Australian slang, someone who is unfashionable, often eccentric or idiosyncratic in style or demeanor together with poor social skills and amusing manner. For example, a person who wears socks and thongs is a dag.
____________________

Galahs are a species of cockatoo, affectionately referred to as "cockies", which developed a taste for grain that plagued early farmers. The greedy birds even learned to unpick the thread at the top of grain sacks to get at their favourite food. Farmers thus afflicted were labelled "cocky farmers" because all they seemed to produce was more galahs and it is this term that led to Australian farmers being known colloquially as "cockies".

Even today the term “galah” in Australia remains in use, synonymous with fool or idiot.

- they were named cockies because like the birds of the same name, they made their homes on the edges of permanent waterholes;

- the name developed from a Cockatoo being the term for a convict serving a sentence on Cockatoo Island, an island in the middle of Sydney Harbour. Mostly they were convicts who had re-offended in the colonies. A scheme was started to take a number of these Cockatoo Islanders and start a new settlement described as ‘a special survey’ at Port Fairy in Victoria. They were referred to as Cockatoo settlers. There are reports of cockatoo settlers and cockatoo farmers throughout Victoria and Tasmania through the early part of the 1800s. The gold rush took the term further north so that it appears in Goulburn, the Hunter Valley and eventually the Darling Downs and Queensland. It lost its association with convicts and became the term employed to contrast small farmers with the squattocracy.
____________________

'The Gun Shearer' by D'Arcy Doyle

they tar the sheep till they're nearly black:

they cut the sheep so much in shearing them that the sheep end up almost covered with the tar applied as an antiseptic. 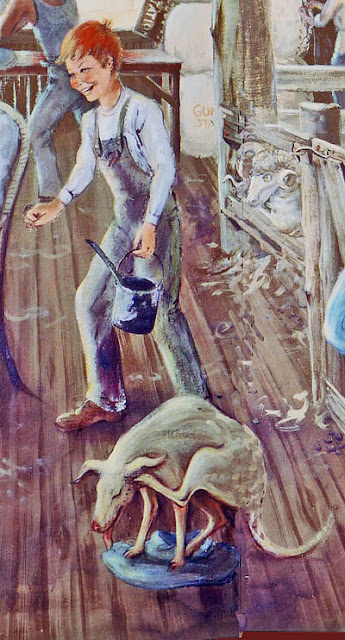 Remember that in those days the shearing was done by metal blade shears, resulting in cuts to the sheep to which hot, molten tar was applied. 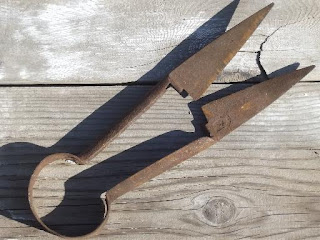 Australian stamps with lines from the folk song Click Go the Shears.  The following pic shows the tar boy and the use of the metal blade shears: 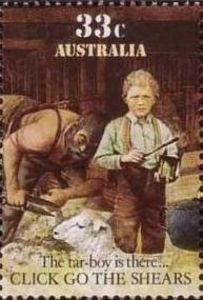 Shearing was revolutionised by the invention of an Australian sheepgrower, Frederick York Wolseley. His machines made in Birmingham, England, by his business The Wolseley Sheep Shearing Machine Company were introduced after 1888, reducing cuts and shearing time.  By 1915 most large sheep station sheds in Australia had installed machines, driven by steam or later by internal combustion engines.
____________________

on the wallaby track:

wool is packed for transport from the shearing sheds in a machine which compresses the wool into sacks, called bales. 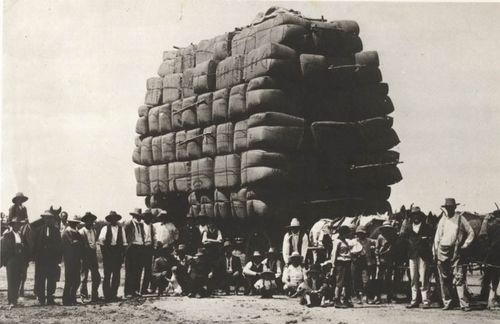 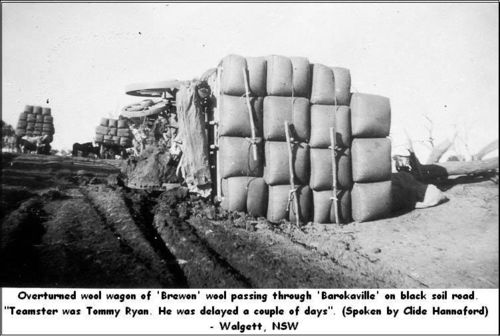 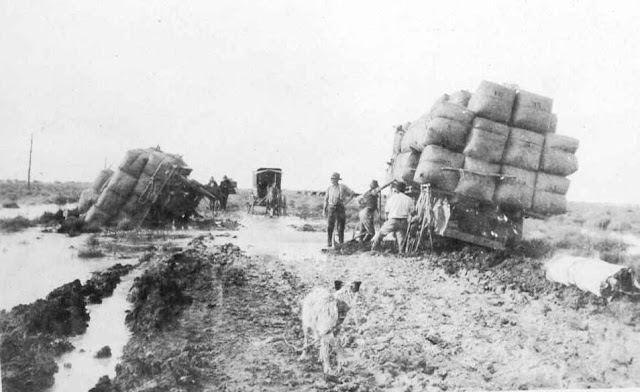 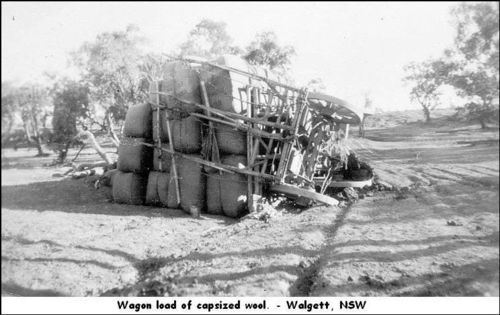 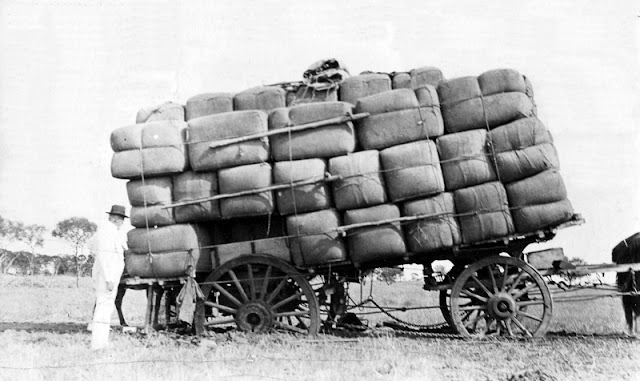 reckon it's time to breast the cook:

Think it is time to approach the station cook for food.

At sundown, the cook would distribute a ration of uncooked food to unemployed 'travellers' who happened to reach the station homestead at about that hour of the day.

In Australia and New Zealand, the term “sundowner” used to refer to a tramp or traveller (swagman or swaggie), especially one who sought food and lodging at sundown when it is too late to work

This is the sense in which the 1960 film The Sundowners uses the term. Starring Deborah Kerr, Robert Mtchum and Peter Ustinov, it was filmed in Oz. 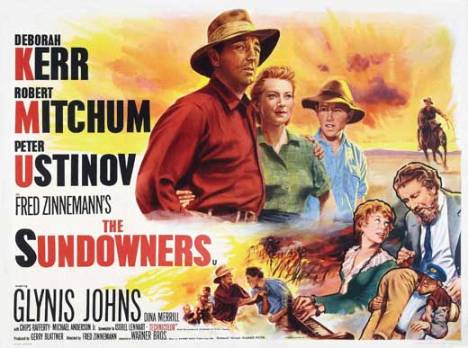 Damper is a traditional Australian soda bread, historically prepared by swagmen, drovers, stockmen and other travellers. It consists of a wheat-flour-based bread, traditionally baked in the coals of a campfire or in a camp oven. Damper is an iconic Australian dish.’

Damper was originally developed by stockmen who travelled in remote areas for long periods, with only basic rations of flour, sugar and tea, supplemented by whatever meat was available. The basic ingredients of damper were flour, water and sometimes milk. Baking soda could be used for leavening. Damper was normally cooked in the ashes of the campfire. The ashes were flattened, and the damper was cooked there for ten minutes. Following this, it was covered with ashes and cooked for another 20 to 30 minutes until it sounded hollow when tapped. Alternatively, damper was cooked in a greased camp oven. Damper was eaten with dried or cooked meat or golden syrup. 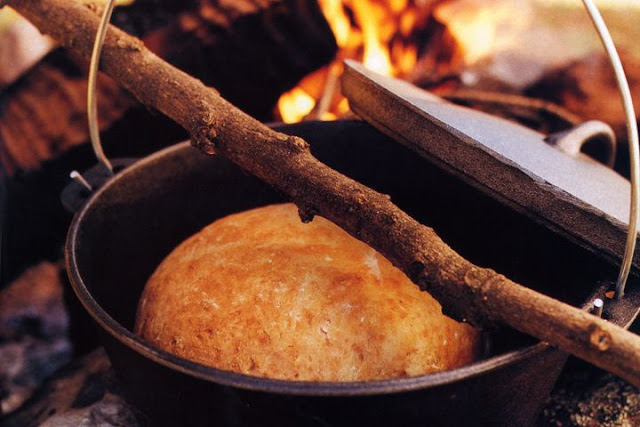 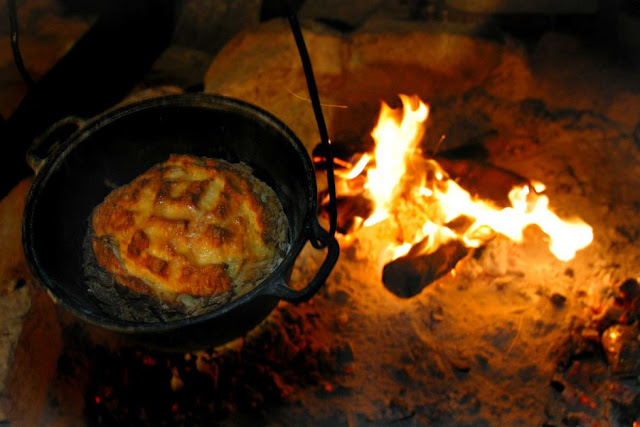 Whereas American history features the exploits of cattle drovers and owners, Australia’s colonial background, as reflected in its folk songs, is based around sheep and, to a lesser extent, gold.

Shearing was backbreaking work, as illustrated by the above images. The shearers were tough men who isolated from their families for lengthy periods, at the mercy of the station owners (even despite being unionised) and with indeterminate engagements, tramping from station to station seeking employment.

Today, many stations across Australia no longer carry sheep due to lower wool prices, drought and other disasters, but their shearing sheds remain, in a wide variety of materials and styles, and have been the subject of books and documentation for heritage authorities. Some farmers are reluctant to remove either the equipment or the sheds, and many unused sheds remain intact.

Blade shears consist of two blades arranged similarly to scissors except that the hinge is at the end farthest from the point (not in the middle). The cutting edges pass each other as the shearer squeezes them together and shear the wool close to the animal's skin. Blade shears are still used today but in a more limited way. Blade shears leave some wool on a sheep and this is more suitable for cold climates such as the Canterbury high country in the South Island of New Zealand where approximately half a million sheep are still shorn with blade shears each year. For those areas where no powered-machinery is available blade shears are the only option. In Australia blades are more commonly used to shear stud rams.

In most countries like Australia with large sheep flocks, the shearer is one of a contractor's team that go from property to property shearing sheep and preparing the wool for market. A workday starts at 7:30 am and the day is divided into four “runs” of two hours each. “Smoko” breaks of a half hour each are at 9:30 am and again at 3 pm. The lunch break is taken at 12 midday for one hour. Most shearers are paid on a piece rate, i.e., per sheep. The shearer collects a sheep from a catching pen, positions it on his “stand” on the shearing board and operates the shearing hand-piece. A shearer begins by removing the wool over the sheep's belly, which is separated from the main fleece by a rouseabout while the sheep is still being shorn. The remainder of the fleece is taken off in one piece by following an efficient set of movements.

Shearers who “tally” more than 400 sheep per day when shearing crossbreds, or around 200 for finer wool sheep such as merino, are known as “gun shearers”. Gun shearers using blade shears are usually shearers that have shorn at least 200 sheep in a day.

Covid travel restrictions, both interstate and from New Zealand, has caused a shortage of available shearers to look after Australia’s 68 million sheep.

The 1975 film Sunday Too Far Away, with Jack Thompson, a marvellous film, provides an insight into life of a shearer. Set in 1955, it deals with the introduction of no-union shearers. The title comes from The Shearers Wife’s Lament – “Friday night too tired, Saturday night too drunk, Sunday too far away.” 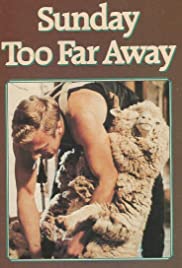