Sandy and the Darkness

A number of persons have told me that they didn't receive the below post last Monday so I didn't post anything yesterday in the hope that there was a minor glitch and that the post below would appear as a catch up.  No such luck.

I am therefore re-posting it and hope that it will appear this time, it is a good story that was sent to me by a reader.

For the next few days I am posting items sent to me by readers.

First Byter up is Sue P, who sent me an email a few days ago with a fascinating story that will no doubt amaze you and provide some new insights. But more of that later.

Remember the 1996 flick called The Ghost and the Darkness, the true story about two lions that attacked and killed workers in Kenya during the building of a railway in East Africa in 1898. Scary scary film.

I thought of that when I received an email from Sue that referred to “Darkness” as a name. but more of that later as well. Sue prefaced her email with the words “I had never heard this before.” I haven’t either.

Here is Sue’s email as sent, with some further notes and comments added by myself at the end.

Simon & Garfunkel's hit The Sound Of Silence topped the US charts and went platinum in the UK. It was named among the 20 most performed songs of the 20th century, included in Rolling Stone's 500 Greatest Songs of All Time, and provided the unforgettable soundtrack to 1967 film classic The Graduate.

But to one man, The Sound Of Silence means much more than just a No 1 song on the radio with its poignant opening lines: "Hello Darkness my old friend, I've come to talk with you again".

"Sanford "Sandy" Greenberg is Art Garfunkel's best friend, and reveals in a moving new memoir, named after that lyric, that the song was a touching tribute to their undying bond, and the singer's sacrifice that saved Sandy's life when he unexpectedly lost his sight.

"He lifted me out of the grave," says Sandy, aged 79, who recounts his plunge into sudden blindness, and how Art Garfunkel's selfless devotion gave him reason to live again. Sandy and Arthur, as Art was then known, met during their first week as students at the prestigious Columbia University in New York.

"A young man wearing an Argyle sweater and corduroy pants and blond hair with a crew cut came over and said, 'Hi, I'm Arthur Garfunkel'," Sandy recalls. They became roommates, bonding over a shared taste in books, poetry and music. "Every night Arthur and I would sing. He would play his guitar and I would be the DJ. The air was always filled with music.

Still teenagers, they made a pact to always be there for each other in times of trouble. "If one was in extremis, the other would come to his rescue," says Sandy. They had no idea their promise would be tested so soon.

Just months later, Sandy recalls: "I was at a baseball game and suddenly my eyes became cloudy and my vision became unhinged. Shortly after that darkness descended."

Doctors diagnosed conjunctivitis, assuring it would pass. But days later Sandy went blind, and doctors realised that glaucoma had destroyed his optic nerves. Sandy was the son of a rag-and-bone man. His family, Jewish immigrants in Buffalo, New York, had no money to help him, so he dropped out of college, gave up his dream of becoming a lawyer, and plunged into depression.

"I wouldn't see anyone, I just refused to talk to anybody," says Sandy. "And then unexpectedly Arthur flew in, saying he had to talk to me.

"I said, 'No. There's no conceivable way.

'"He was pretty insistent, and finally said, 'Look, I don't think you get it. I need you back there. That's the pact we made together: we would be there for the other in times of crises. I will help you'.

"Together they returned to Columbia University, where Sandy became dependent on Garfunkel's support. Art would walk Sandy to class, bandage his wounds when he fell, and even filled out his graduate school applications. Garfunkel called himself "Darkness" in a show of empathy.

The singer explained: "I was saying, 'I want to be together where you are, in the black'. "Sandy recalls: "He would come in and say, 'Darkness is going to read to you now.'“ Then he would take me to class and back. He would take me around the city. He altered his entire life so that it would accommodate me.

"Garfunkel would talk about Sandy with his high-school friend Paul Simon, from Queens, New York, as the folk rock duo struggled to launch their musical careers, performing at local parties and clubs.

Though Simon wrote the song, the lyrics to The Sound of Silence are infused with Garfunkel's compassion as Darkness, Sandy's old friend.

Guiding Sandy through New York one day, as they stood in the vast forecourt of bustling Grand Central Station, Garfunkel said that he had to leave for an assignment, abandoning his blind friend alone in the rush-hour crowd, terrified, stumbling and falling. "I cut my forehead" says Sandy. "I cut my shins. My socks were bloodied. I had my hands out and bumped into a woman's breasts. It was a horrendous feeling of shame and humiliation.

"I started running forward, knocking over coffee cups and briefcases, and finally I got to the local train to Columbia University. It was the worst couple of hours in my life. "Back on campus, he bumped into a man, who apologized.

"I knew that it was Arthur's voice," says Sandy. "For a moment I was enraged, and then I understood what happened: that his colossally insightful, brilliant yet wildly risky strategy had worked. "Garfunkel had not abandoned Sandy at the station, but had followed him the entire way home, watching over him. "Arthur knew it was only when I could prove to myself I could do it that I would have real independence," says Sandy. "And it worked, because after that I felt that I could do anything. "That moment was the spark that caused me to live a completely different life, without fear, without doubt.

For that I am tremendously grateful to my friend. "Sandy not only graduated, but went on to study for a master's degree at Harvard and Oxford. While in Britain he received a phone call from his friend - and with it the chance to keep his side of their pact. Garfunkel wanted to drop out of architecture school and record his first album with Paul Simon, but explained: "I need $400 to get started. "Sandy, by then married to his high school sweetheart, says: "We had $404 in our current account. I said, 'Arthur, you will have your cheque.' "It was an instant reaction, because he had helped me restart my life, and his request was the first time that I had been able to live up to my half of our solemn covenant.

"The 1964 album, Wednesday Morning, 3AM, was a critical and commercial flop, but one of the tracks was The Sound Of Silence, which was released as a single the following year and went to No 1 across the world. "The Sound Of Silence meant a lot, because it started out with the words 'Hello darkness' and this was Darkness singing, the guy who read to me after I returned to Columbia blind," says Sandy.

Simon & Garfunkel went on to have four smash albums, with hits including Mrs Robinson, The Boxer, and Bridge Over Troubled Waters Amazingly, Sandy went on to extraordinary success as an inventor, entrepreneur, investor, presidential adviser and philanthropist. The father of three, who launched a $3million prize to find a cure for blindness, has always refused to use a white cane or guide dog. "I don't want to be 'the blind guy'," he says. "I wanted to be Sandy Greenberg, the human being.

Six decades later the two men remain best friends, and Garfunkel credits Sandy with transforming his life. With Sandy, "my real life emerged," says the singer. "I became a better guy in my own eyes, and began to see who I was - somebody who gives to a friend.

"I blush to find myself within his dimension. My friend is the gold standard of decency. "Says Sandy: "I am the luckiest man in the world."

(Keep reading after the lyrics below).

[Verse 1]
Hello darkness, my old friend
I've come to talk with you again
Because a vision softly creeping
Left its seeds while I was sleeping
And the vision that was planted in my brain
Still remains
Within the sound of silence

[Verse 3]
And in the naked light I saw
Ten thousand people, maybe more
People talking without speaking
People hearing without listening
People writing songs that voices never share
And no one dared
Disturb the sound of silence

[Verse 4]
"Fools", said I, "You do not know
Silence like a cancer grows
Hear my words that I might teach you
Take my arms that I might reach you"
But my words, like silent raindrops, fell
And echoed in the wells of silence

[Verse 5]
And the people bowed and prayed
To the neon god they made
And the sign flashed out its warning
In the words that it was forming
And the sign said:
"The words of the prophets are
Written on the subway walls
And tenement halls
And whispered in the sound of silence."

The above story is wholly true.

Sandy Greenberg’s book “Hello Darkness, My Old Friend: How Daring Dreams and Unyielding Friendship Turned One Man’s Blindness into an Extraordinary Vision for Life", was released in June of this year: 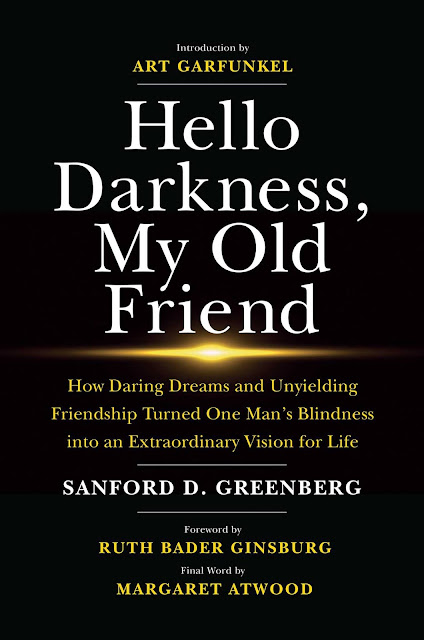 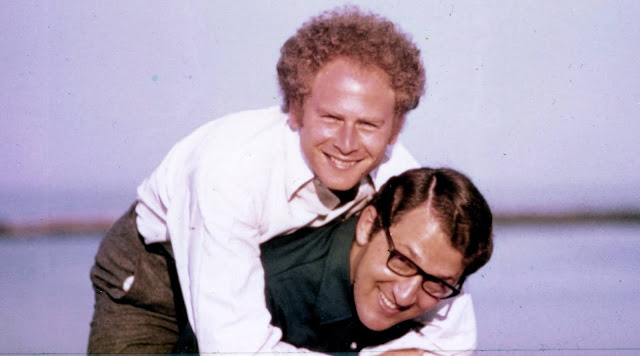 Art Garfunkel and Sandy Greenberg in the 1970s. 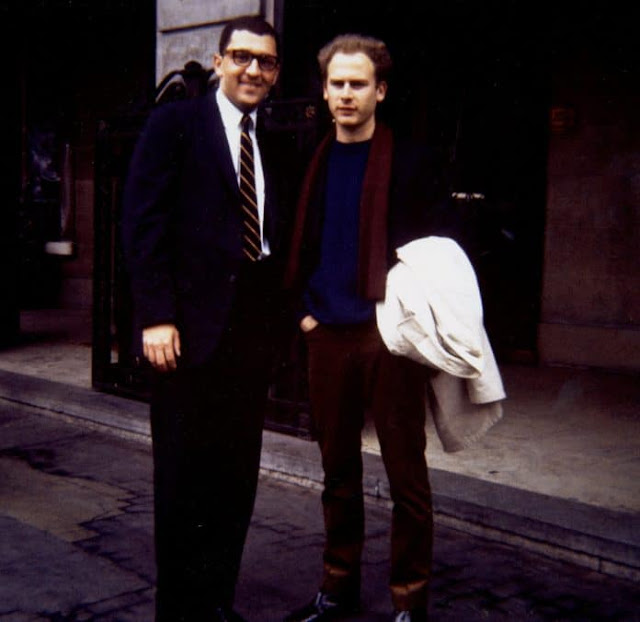 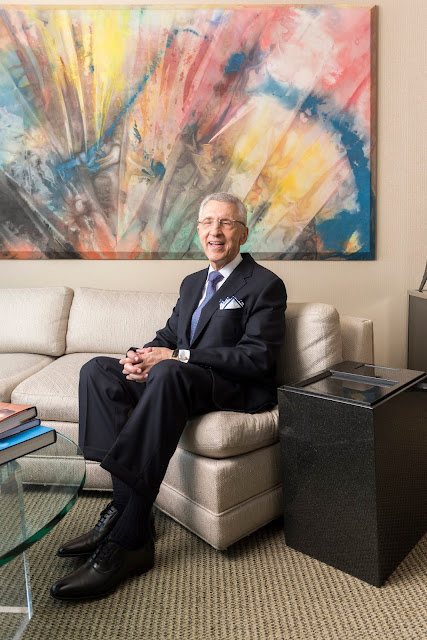 “He changed all of his habits to help me out,” Greenberg said of Garfunkel. “He would take me out in the city, walk me to class, help me fix my tape recorder. “Most importantly, he would read to me regularly. He’d walk into the room and say, ‘Sanford, Darkness is going to read to you from “The Iliad” today,’ or ‘Sanford, Darkness is going to read to you today.’ I suppose he meant that, for me, his voice was emerging from the darkness. Because he called himself Darkness, I decided that should be the title of my book.”

Greenberg ultimately graduated Phi Beta Kappa (as class president) and went on to doctoral studies at Harvard and Oxford and a life of great accomplishment, including serving as a White House Fellow under President Lyndon Johnson. He invented and holds a patent for a compressed speech machine that can speed up the reproduction of words from recordings without distorting sound, was named to presidential commissions, built companies, was a pioneer in technology and philanthropy and more. Greenberg now chairs the Board of Governors of The Johns Hopkins University’s Wilmer Eye Institute.

Not bad for someone who, having gone blind, was told by a social worker that he might become a justice of the peace in a small town or learn to cane chairs.
Posted by BytesMaster at 1:29 PM