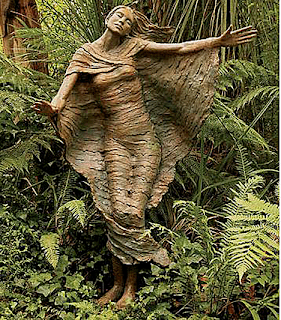 Marysville is a little town about 100 kilometres out of Melbourne that came into existence as a stopping point for those travelling to the goldfields. Named after Mary Steavenson, the wife of Assistant Commissioner of Roads and Bridges John Steavenson, it continued its stopping point status when the coach route passed through, eventually becoming a tourist attraction in its own right for its bushwalking, views, gullies and lush rainforests. From the 1920’s tourism became the mainstay of the Marysville economy.  Over the years cafes, art galleries, restaurants, and craft shops developed, catering to that industry. It is also used as a base for those travelling to the snowfields.  It came to be referred to as "God's own garden".
One year ago, on Saturday, 7 February 2009, the fires hit Marysville.

Believed by the police to have  been the result of arson. 45 people died in Marysville and the surrounding locality, with 90% of the Marysville buildings destroyed.  In total, 173 people died from the fires. That day is now known as Black Saturday.  Following the fires, the police shut the whole of Marysville down as a crime scene and restricted access, whilst they went through the grim task of searching for, and extracting, bodies ruin by ruin..
Destroyed in the fires was Bruno Torfs' Art and Sculpture Garden, along with his gallery and house.
Torf was born in South America and lived there to the age of 15. From there he and his family moved to Europe in search of opportunity. There he became a signwriter whilst training as an artist, eventually devoting himself fulltime to his art. In 1996 Bruno and family bought a property in Marysville with the intention of setting up a gallery and sculpture garden. In time his garden housed hundreds of sculptures and his gallery over 200 works, inlcuding his original oils and sketches.
The sculptures, made of wood, terracotta and other materials, drew on his South American background and world travels, ranging from people to mystical creatures, all integrated into the lush ferns, trees and rainforest landscape. Wizards gazes from tree trunks, creatures from hollow logs, people sat under shady trees…
Take the time to view his amazing works and garden, pre-fire, at:
http://www.youtube.com/watch?v=Pp5-Rx3pxo8
In ten minutes the Black Saturday fires took away Bruno’s gallery and works, his house, the ferns and the rainforests. With his family in Melbourne, Bruno managed to save, 8 paintings, his guitar and saxophone. Amazingly, about half of the garden sculptures were intact or capable of repair. The destroyed sculptures had either been burnt or crushed by falling trees. 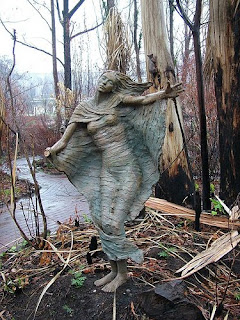 It is easy to say that Bruno Torfs was fortunate in that the lives of his family and himself were spared when so many others died. On his website he himself acknowledges his good fortune in being left alive. Nonetheless the loss of such a body of work in which he had invested so much of himself must be a soul destroying experience.
In an interview on 7 February 2010, one year after the fires, Bruno said

Some of the terracotta sculptures survived but the lush greenery, so crucial to the magic here, had all been wiped out. There wasn't a single leaf left. The look, the smell - it felt like another planet. The beauty is returning to the garden, and to Marysville. A lot of people left but there is a core group who remain very optimistic. The place is blooming, there's a new beginning and, if people are adventurous, they can be part of that.

With the assistance of family,  friends and locals he is rebuilding and replanting his sculpture garden. His gallery’s website has pics of the restoration, at:
http://www.brunosart.com/reopen.html
The official reopening is on 29 November this year. 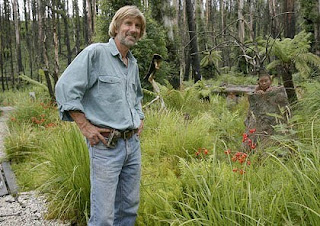 Posted by BytesMaster at 1:59 AM