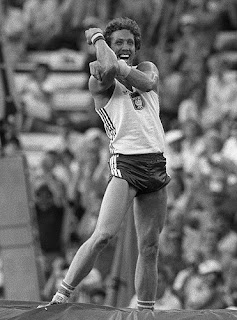 Watching some of the ice hockey at the Winter Olympics on the TV brought to mind an iconic moment at the Summer Olympics in 1980. That year the Olympics were held in Moscow. The US and various other countries had withdrawn from the games as a protest against Russia’s involvement in Afghanistan, so that tensions were high.  The Russians felt that their plans and efforts for a spectacular Olympics had been deliberately sabotaged and that they had been humiliated in the eyes of the world.

In the pole vault, the battle for gold had come down to the Russian competitor, Konstantin Volkov, and the Pole Władysław Kozakiewicz (pronounced Vlad-is-lav Ko-za-kev-ich). To understand what happens next, know that the Poles are a fierce nationalistic and independent-minded people. At the time Poland was under the domination of the Soviet bloc, in effect Poland was run and controlled by Russia, a fact which the Poles hated with a vengeance.

The battle had come down to Kozakiewicz’s vault. A success would see him take gold, a fail would result in Volkov taking the gold and the Pole the silver.
As he readied himself and psyched for the jump, the Russian crowd in the Moscow stadium booed, jeered, whistled and yelled at Kozakiewicz, who maintained his concentration on the vault. He appeared not to hear them or to be aware of the noise directed towards him.

As he rose to his feet after landing, he turned to the hostile Russian crowd and delivered his salute to them, pictured above.

I was never previously aware, until looking up the story for this item, that such a mannerism had an official title: Bras d’honneur, French for “arm of honour”. As does the middle finger extended, the Doigt d'honneur, “finger of honour”. The finger gesture dates back to Ancient Rome, where it was known as the digitus impudicus (impudent finger). It has also been referred in ancient Greek comedy for insulting another person. The use in other countries is probably due to Roman and Greek influence.

In Poland, Kozakiewicz’s bras d’honneur became known as “Kozakiewicz’s gesture” and photos showed it worldwide, except in the Soviet Union and its satellites.

After the 1980 Olympics ended, the Soviet ambassador to Poland demanded that Kozakiewicz be stripped of his medal over his "insult to the Soviet people". The Polish government replied that, having investigated the alleged insult, it was clear that the gesture had been an involuntary muscle spasm caused by his exertion.
Posted by BytesMaster at 6:03 AM