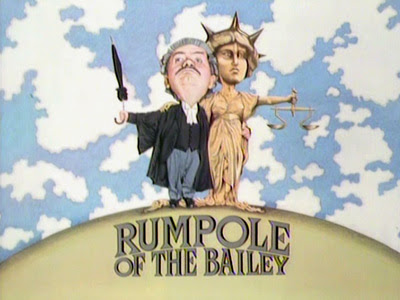 Watching a DVD about a barrister at the Old Bailey started me wondering as to the origins of the name. How is it that London’s major criminal court, a court which has seen defendants as diverse as Dr Crippen, the Kray Twins, Jeremy Thorpe, the Yorkshire Ripper and Lard Haw-Haw, is known by the name Old Bailey?

In looking that up, some familiar names and references also turned up…

- The Old Bailey is the former name, and the continuing popular name, used by the public for the Central Criminal Court in London.

- The derivation of the name Old Bailey is uncertain and there are a number of possibilities:

The word “bailey” dates from c 1300 and comes from “baylle”, the outermost wall of a castle or fortified town. This in turn became the term for a wall and later a street. In medieval times a street, or bailey, ran from Lud Gate to New Gate (later Newgate) in London. This street became known as the Old Bailey, the name coming to be applied to the court that was later located in that street. It is also possible that the court was a part of the walls in that area.

Another explanation is that from the 1350’s the area between Ludgate and Newgate, the bailey, was used for courts, thereby giving rise to the name The Old Bailey for the courts later located there.

A further explanation is that the Scots word “bailie” was the title of a municipal magistrate. In England that word developed into “bailiff”, an officer of the court. It is thought that the area in which the Old Bailey was located was originally the site where a bailiff lived and held court, giving rise to the name of that area as Bail Hill.  In turn, the court conducted there came to be knwon as the  Old Bailey.

- The original court is first mentioned in 1585. It was located next to the older, infamous Newgate Prison.

- The court appears to have grown from a bequest for the extension to, and improvement of, Newgate Prison by Richard Whittington (1354 – 1453), a medieval merchant and Lord Mayor of London. Although he is the inspiration for the pantomime character of that name, there is no evidence that he was associated with a cat. Nonetheless that legend – that he was of lowly birth, was convinced to go to London by the sound of the Bow Bells predicting that he would be Lord Mayor, and that his cat helped to make his fortune – was established by 1605. 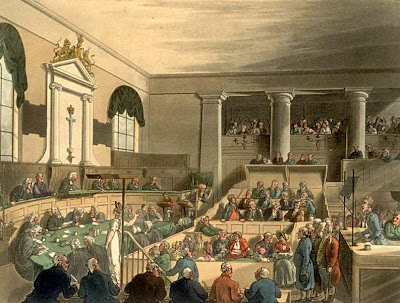 - In 1834 it was renamed the Central Criminal Court and its jurisdiction was extended beyond that of London and Middlesex to the whole of the English jurisdiction for trial of major cases.

- The present building dates from 1902. Above the main entrance is inscribed the admonition, "Defend the Children of the Poor & Punish the Wrongdoer". 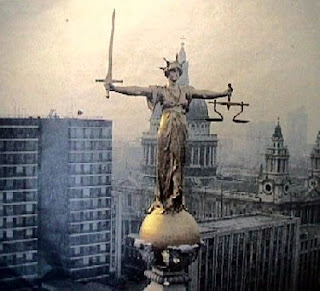 - On the dome above the court stands a bronze statue of Lady Justice, executed by British sculptor F W Pomeroy. I have not been able to discover whether he owned a wine bar. The statue of Justice holds a sword in her right hand and the scales of justice in her left. Although traditionally the statue has a blindfold to show that justice is blind, that is, impartial, this figure is not blindfolded. The courthouse brochures explain that this is because Lady Justice was originally not blindfolded, and because her “maidenly form” is supposed to guarantee her impartiality which renders the blindfold redundant.

- In the 19th century, when the Old Bailey was a small court adjacent to Newgate Prison, hangings were a public spectacle in the street outside until late into the century. Condemned prisoners were led along Dead Man’s Walk between the prison and the court where large, riotous crowds would gather and pelt the condemned with rotten fruit, vegetables and stones. A tunnel was later built between the prison and St Sepulchre church opposite, to allow the priest to minister to the condemned prisoners without having to force their way through the crowds. 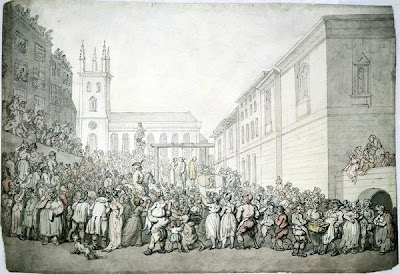 - Interestingly, the Old Bailey is also associated with the children’s nursery rhyme and song “Oranges and Lemons”:

Children file in pairs through an arch made by the arms of two other children. At the end of the song on the last word, a pair of children are trapped by the arms forming the arch being brought down, The children so caught join the other two and form an additional arch, and so on until the last two are the winners. The fact of the arms being brought down emulates the chopping off of the head.

- Before 1783, public hangings were conducted at Tyburn-gate at the Tyburn-tree gallows. In that year the executions were moved to Newgate Prison next to the Old Bailey, a gaol for both criminals and debtors (”When will you pay me?” say the Bells of Old Bailey). The move had become necessary because of the large crowds drawn by the executions along the 3 mile procession route from Newgate Prison to the Tyburn-tree and around the tree, sometimes exceeding 100,000 in number.

- The 'Bells of Old Bailey' refers to the tenor bell of St Sepulchre church. That bell was used before 1783 to announce the executions. As the prisoner awaited hanging on Death Row, the Bellman of St. Sepulchre came by with a candle and a large hand bell (“the Execution Bell”) at midnight. The bellman tolled the bell and recited:

All you that in the condemned hole do lie,
Prepare you for tomorrow you shall die;
Watch all and pray: the hour is drawing near
That you before the Almighty must appear;
Examine well yourselves in time repent,
That you may not to eternal flames be sent.
And when St. Sepulchre's Bell in the morning tolls
The Lord above have mercy on your soul.

The executions commenced at nine o'clock Monday morning following the first toll of the tenor bell. 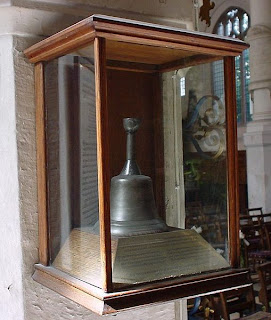 The Newgate Execution Bell, now held at the Church of St Sepulchre

- After 1783, Newbridge Prison obtained its own bell.

- Executions took place in public at Newgate Prison until 1868, from which year Parliament directed the executions to be carried out within the walls of the prison.


Farewell to old England forever
Farewell to my rum culls as well
Farewell to the well known Old Bailey
Where I used for to cut such a swell
-  Botany Bay
Posted by BytesMaster at 11:58 PM

Email ThisBlogThis!Share to TwitterShare to FacebookShare to Pinterest
Labels: The Old Bailey