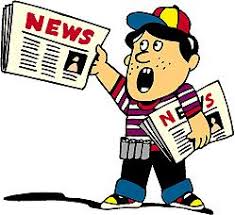 A news item about the Covid restrictions introduced over the weekend in Victoria where the Covid numbers are spiking:

The post was referring to anti-lockdown protests in Germany on Saturday that saw an estimated 17,000 people march through Berlin, some holding signs such as 'Corona false alarm'. In a reference to Nazi Germany, another conspiracy theorist jumped on board saying: 'Next will be for your own good get on the train and people will believe.' In Nazi Germany, Jewish people were put on a train from the ghetto that led straight to the death camp of Auschwitz. The phrase suggests people should not trust governments when they tell people to do things for their own good.

Unlike Nazi Germany, Victoria's coronavirus restrictions have been imposed to save people's lives and protect the most vulnerable, not to persecute them.

The above item made me recall Godwin’s Law, something I posted about briefly in 2010.

What is Godwin’s Law?

Godwin’s Law is an internet adage that was formulated by Mike Godwin in 1989. It holds that:

"As an online discussion grows longer, the probability of a comparison involving Nazis or Hitler approaches 1."

His meaning was that, given enough time, all discussions—regardless of topic or scope—inevitably end up being about Hitler and the Nazis.

His intention was to make participants in a discussion more aware of whether a comparison to Nazis or Hitler is appropriate, or whether it is simply a rhetorical overreach.

Godwin’s Law has been elevated into a wider and more general formulation that holds that invoking Hitler or the Nazis as a debating tactic in any argument not directly related to World War 2 or the Holocaust automatically loses the argument.

This is because invoking such significant and horrible events in a debate is inappropriate and in poor taste.

Put more simply, as a general rule, the first to play the Hitler Card in a discussion other than on Hitler or the Holocaust has lost the argument.

In 1953, prior to Godwin’s formulation of Godwin’s Law, ethical philosopher Leo Strauss had already formulated an observation relating to the playing of the Hitler Card.

He called his observation “Reductio ad Hitlerum” (Latin for “reduction to Hitler”) and it holds that:

“A view is not refuted by the fact that it happens to have been shared by Hitler.”

The application of Godwin’s Law can be an abuse of argument, a distraction, a diversion and even a means of censorship where the Nazi/Hitler comparison is actually appropriate.

Mike Godwin himself has said that the overapplication of Godwin’s law has in some cases had the opposite effect, that although intended not to trivialise the Holocaust, it has instead sometimes relegated the Holocaust into a minor p;lace. According to Godwin: “I wanted folks who glibly compared someone else to Hitler to think a bit harder about the Holocaust."

The election of Donald Trump as President of the US has refocused attention on Godwin’s Law with even Mike Godwin having to announce that there can be exceptions to his Law.

In December 2015 Godwin stated "If you're thoughtful about it and show some real awareness of history, go ahead and refer to Hitler when you talk about Trump, or any other politician."

Godwin has also stated that it was acceptable to call Brazilian politician Jair Bolsonaro a “Nazi” and to call US refugee detention "concentration camps".

So does Godwin’s Law apply to the above news item?

Arguments can be made both ways but as someone whose parents suffered at the hands of the Nazis in occupied Holland, with my mother having the scars of German shrapnel on her thigh and my father twice escaping trains taking him to slave labour camps, it seems to me that the wearing of a mask is far removed from that.

After reading the above news story yesterday morning, the next read was an item from the online Smithsonian magazine that I receive as a subscriber.

The item to which I am referring is an article reporting that last week a court in Hamburg, Germany, convicted Bruno Dey, a 93-year-old former Nazi concentration camp guard, in what will likely be one of the country’s last Holocaust trials. 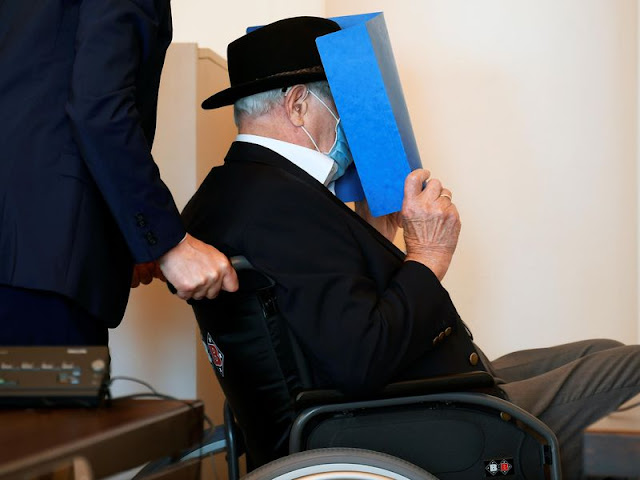 Bruno Dey, a former SS watchman at the Stutthof concentration camp, hides his face behind a folder as he arrives for a hearing in his trial on July 23.

Dey worked at the Stutthof concentration camp in Poland between August 1944 and April 1945. Found guilty of 5,230 counts of accessory to murder—a figure based on the number of people who died at Stutthof during his tenure—Dey received a two-year suspended sentence.

Over nine months of court proceedings, more than 40 co-plaintiffs from France, Israel, Poland and the United States testified against the former SS guard, according to CNN’s Nadine Schmidt. Witnesses detailed the many atrocities committed at Stutthof, which was established in 1939 as the first wartime concentration camp outside of Germany.

Stutthof, located east of Gdańsk in northern Poland, housed upward of 100,000 prisoners during its six years in operation. In total, more than 60,000 people—around half of whom were Jews—died of disease, starvation, exhaustion and execution. Court documents indicate that victims were gassed with Zyklon B, shot in the back of the head and denied medical care.

Per a press release, prosecutors argued that Dey, a tower guard tasked with ensuring inmates didn’t escape or revolt, “knowingly supported the insidious and cruel killing of prisoners” as a “small wheel in the machinery of murder.”

During the trial, judge Anne Meier-Göring refuted Dey’s claim that he’d had no choice in the matter, saying: “You still see yourself as a mere observer, when in fact you were an accomplice to this manmade hell.” 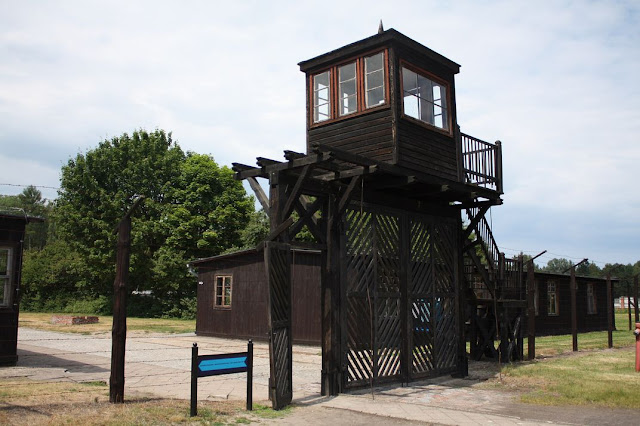 A watchtower at Stutthof concentration camp 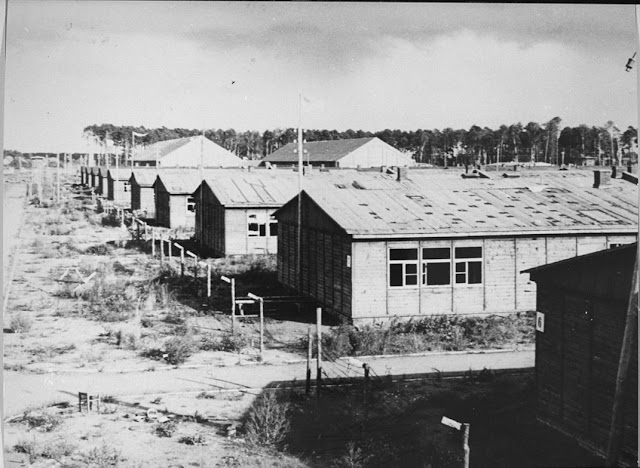 Prisoner barracks at Stutthof concentration camp, as seen after liberation

From the same Smithsonian Magazine, a story that an art historian has identified the spot where Vincent van Gogh (who died 130 years ago on 29 July 1890) painted his final work

The painting is called Tree Roots: 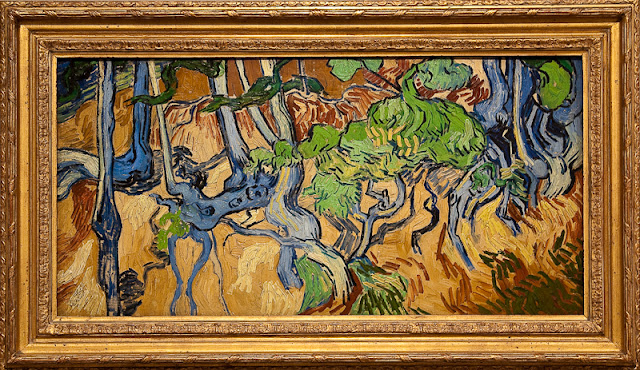 According to a commentary on the Van Gogh Museum website:

This painting seems at first sight to consist of a jumble of bright colours and fanciful abstract forms. Only after that do you realise that it shows a slope with tree trunks and roots. These are trees used for timber, growing in a marl quarry. Such quarries could be found around Auvers (FR). The work was not entirely completed. That explains its unfinished appearance. It is probably Van Gogh's very last painting. Andries Bonger, the brother-in-law of Vincent's brother Theo, described it in a letter: 'The morning before his death, he had painted a sous-bois [forest scene], full of sun and life.'

Researcher Wouter van der Veen was able to discover the tree roots painted by Van Gogh by sighting a 1905 postcard which shows on the left half a cyclist next to a steep hill with knotted roots; on the right, Van Gogh's painted rendition of the same hillside in colour,

Ahead of the 130th anniversary of the artist’s July 29 death, Emilie Gordenker, director of the Van Gogh Museum, and Willem van Gogh, great-grandson of Vincent’s brother Theo, unveiled a commemorative plaque at the newly identified site. 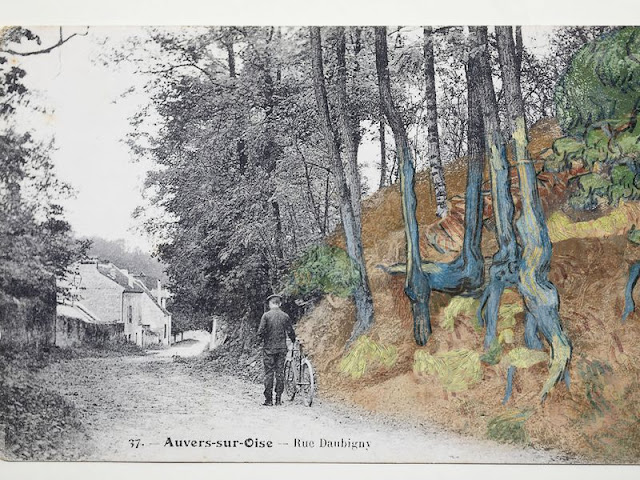 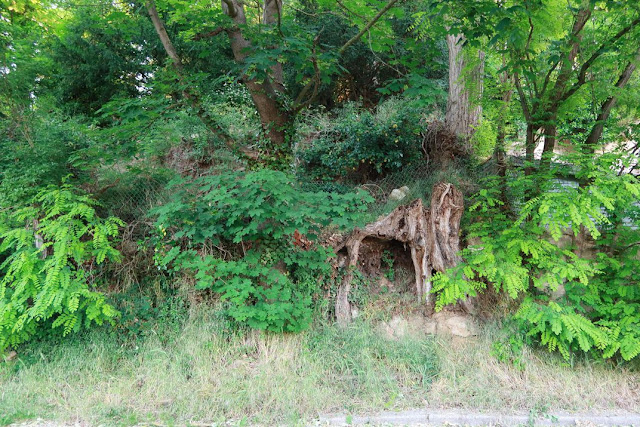 Source:
Smithsonian Magazine
2 August 2020
https://www.smithsonianmag.com/smart-news/how-one-art-historian-discovered-exactly-where-van-gogh-painted-his-final-work-180975438/?utm_source=smithsoniantopic&utm_medium=email&utm_campaign=20200802-weekender&spMailingID=43093199&spUserID=NzQwNDUzNzA1MDkS1&spJobID=1820038751&spReportId=MTgyMDAzODc1MQS2
Posted by BytesMaster at 5:46 AM