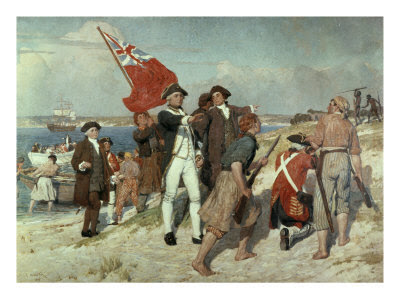 
On 29 April 1770 Captain James Cook first stepped ashore at what is now Kurnell in what is now Australia and immediately shot one of the indigenous population for throwing a stone, setting the tone for black-white relations for the next 238 years until Kevin Rudd said sorry.

In the P.M. wind Southerly and Clear weather, with which we stood into the bay and Anchored under the South shore about 2 miles within the Entrance in 5 fathoms, the South point bearing South-East and the North point East. Saw, as we came in, on both points of the bay, several of the Natives and a few hutts; Men, Women, and Children on the South Shore abreast of the Ship, to which place I went in the Boats in hopes of speaking with them, accompanied by Mr. Banks, Dr. Solander, and Tupia. As we approached the Shore they all made off, except 2 Men, who seem’d resolved to oppose our landing. As soon as I saw this I order’d the boats to lay upon their Oars, in order to speak to them; but this was to little purpose, for neither us nor Tupia could understand one word they said. We then threw them some nails, beads, etc., a shore, which they took up, and seem’d not ill pleased with, in so much that I thought that they beckon’d to us to come ashore; but in this we were mistaken, for as soon as we put the boat in they again came to oppose us,
upon which I fir’d a musquet between the 2, which had no other Effect than to make them retire back, where bundles of their darts (spears) lay, and one of them took up a stone and threw at us, which caused my firing a Second Musquet, load with small Shott; and altho’ some of the shott struck the man, yet it had no other effect than making him lay hold on a Target (shield). Immediately after this we landed, which we had no sooner done than they throw’d 2 darts at us; this obliged me to fire a third shott, soon after which they both made off, but not in such haste but what we might have taken one; but Mr. Banks being of Opinion that the darts were poisoned, made me cautious how I advanced into the Woods. We found here a few small hutts made of the Bark of Trees, in one of which were 4 or 5 Small Children, with whom we left some strings of beads, etc. A quantity of Darts lay about the Hutts; these we took away with us. 3 Canoes lay upon the beach, the worst I think I ever saw; they were about 12 or 14 feet long, made of one piece of the Bark of a Tree, drawn or tied up at each end, and the middle keept open by means of pieces of Stick by way of Thwarts. After searching for fresh water without success, except a little in a Small hole dug in the Sand, we embarqued, and went over to the North point of the bay, where in coming in we saw several people; but when we landed now there were nobody to be seen. We found here some fresh Water, which came trinkling down and stood in pools among the rocks; but as this was troublesome to come at I sent a party of men ashore in the morning to the place where we first landed to dig holes in the sand, by which means and a Small stream they found fresh Water sufficient to Water the Ship. The String of Beads, etc., we had left with the Children last night were found laying in the Hutts this morning; probably the Natives were afraid to take them away. After breakfast we sent some Empty Casks a shore and a party of Men to cut wood, and I went myself in the Pinnace to sound and explore the Bay, in the doing of which I saw some of the Natives; but they all fled at my Approach. I landed in 2 places, one of which the people had but just left, as there were small fires and fresh Muscles broiling upon them; here likewise lay Vast heaps of the largest Oyster Shells I ever saw.

Posted by BytesMaster at 3:09 AM