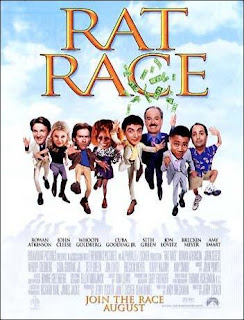 If you have not yet seen the 2001 flick Rat Race, rush out to your movie outlet, buy or borrow it and spend a lazy Sunday afternoon watching it, close your eyes and drift away, as the Small Faces sang.

For those of you who don’t want your enjoyment of the movie diminished, stop reading now, there are spoilers ahead.

Rat Race is one of my favourite fillums and is one of a handful that can actually cause me to laugh out loud. I’ve seen it heaps of times but still like watching it again every now and then.

There are so many scenes and so many quotes worth mentioning that I feel I am doing an injustice by selecting only one, but that one is gold: the Hitler Car.

Six teams of people are sent on a race from Las Vegas to Silver City where a storage locker contains two million dollars. Whoever gets there first gets to keep the money. Unbeknownst to them, however, they are part of a bet by wealthy gamblers who monitor their progress.

Jon Lovitz plays Randal “Randy” Pear, who takes part in the race without telling his wife and children. Having been sworn to secrecy, he takes them with him, telling them that he has a job interview in Silver City and has to rush there.

While driving through the desert, his daughter sees a sign “Barbie Museum” and pleads that they go. His wife Bev (Kathy Najimy) insists that they stop for a break. The family, who is Jewish, finds that the museum is run by a pair of neo-Nazis and is a shrine to the Nazi Klaus Barbie, the infamous Butcher of Lyons. The centrepiece of the museum is Hitler’s car.

They flee but find that their car has been sabotaged by other competitors. Randy steals the Hitler car and Bev and the kids play around with things they find in the car: a mouth organ and Eva Braun’s black lipstick. Some of the lipstick ends up on the top of the steering wheel.

Randy burns his finger on the cigarette lighter and waves it to cool it, not realising that there is a female biker next to where he is extending his middle finger.

Things degenerate from there, the bikers trash the Hitler Car and Randy ends up with the red hot cigarette lighter in his mouth, burning his tongue. He crashes through a fence and hits his top lip on the steering wheel, leaving a lipstick mark on his top lip.

Unfortunately, he has crashed in the Hitler Car bearing a swastika flag on to the stage of a convention of surviving World War 11 veterans. His wife encourages him to explain what has happened so he address the convention with his speech impairment.

From there on you must see the scene: http://www.youtube.com/watch?v=bRu7KFdILmQ

The clip above commences from randy burning his middle finger.

John Cleese plays Donald Sinclair, the leader of the gamblers. He has stated that the real Donald Sinclair was a deceased hotel owner in Torquay, England and that he met him when the Monty Python team stayed at Sinclair’s hotel. Donald Sinclair’s blunt nature and sharp tongue were the inspiration for Basil Fawlty, with Fawlty Towers being set in Torquay.

When Randy is speeding to Silver City and before they see the Barbie Museum, his daughter Kimberly advises that she wishes to go to the toilet. He doesn’t want to stop…
Bev Pear: Your daughter has to go to the bathroom!
Randy Pear: All right, all right, Jason, look in the back for an empty jar.
Bev Pear: A jar? Girls don't pee in jars.
Randy Pear: Oh, right. Sorry. Jason, we're gonna need a jar and a funnel.
Kimberly Pear: Dad, I'm prairie dogging it!
Randy Pear: What the hell does that mean?
Jason Pear: You know, like when a prairie dog sticks his head in and out of the ground.
Randy Pear: Oh.

Posted by BytesMaster at 9:52 PM